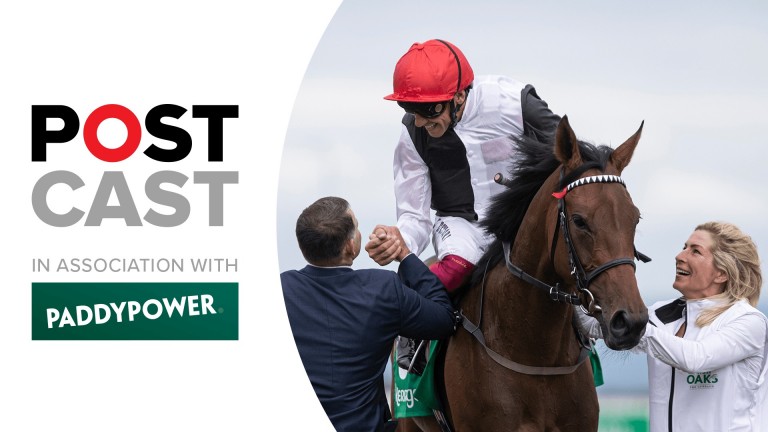 Racing Postcast: Irish Oaks & Weekend Review | King George Preview | Midweek Tipping
Racing Post's Maddy Playle is joined by Robbie Wilders, Tom Park and Paddy Power's Darren Hughes for a look back at another Dettori masterclass in the Irish Oaks as well as the best of the weekend's action, plus midweek tipping from Leopardstown, Naas, York and Ascot.

- Frankie Dettori won impressively on board John Gosden trained Star Catcher after making all at The Curragh in the Irish Oaks. The team assess the race and how those in behind didn't stand a chance.

- The Hackwood Stakes at Newbury on Saturday threw up a surprise winner as the German raider Waldpfad won at a huge 33/1 under a good ride from Andrea Atzeni. With trainer Dominic Moser no stranger to success over in Britain and Waldpfad already a winner of a Group 3 contest could we see more of him over here?

- There were good wins for the likes of Withhold in the Marsh Cup at Newbury after a long lay off, while at the Curragh on Sunday Soffia took the Sapphire Stakes in fine style. The team asses the best of the rest on the weekend.

- The team give their best bets for a few of the big races in the week before leading up to the big one on Saturday, the King George at Ascot. Will any of the panel oppose John Gosden's superstar Enable?