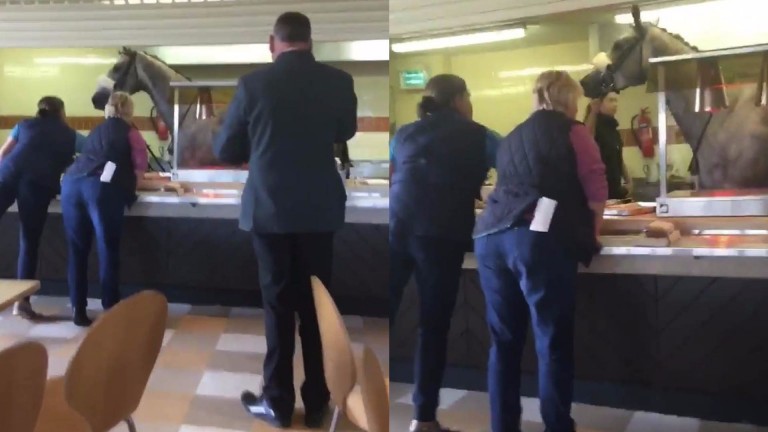 UB40 famously sang 'There's a rat in mi kitchen what am I gonna do?' But perhaps they should have been more concerned about the prospect of an intruding horse based on events at Redcar on Monday.

Four-year-old grey filly Rosamaria may have finished only fourth in the mile handicap but she grabbed the headlines thanks to a detour on the way back to the stable yard which saw her appear behind the counter in the stable lads' canteen.

Explaining how the unusual event unfolded, Steve Brown, husband of Rosamaria's trainer Julie Camacho, said on Tuesday: "It was after the race on the way back to the stable yard and the filly shied away from a camera and got loose, ending up in the canteen.

"Luckily she's absolutely A1. It could have been bad but there was no harm done.

"Of all the things I've seen on a racecourse this is a new one – it was very bizarre!"

Redcar racecourse manager Amy Fair praised the kitchen staff's calm response to a situation which could have been nasty but has become a viral sensation after the video was shared on Twitter by trainer Simon Waugh.

Fair said: "What helped is that the ladies who run the kitchen work at a number of racecourses in Yorkshire and are comfortable with horses and know how to deal with them – they didn't panic."