The questions to be answered and what the key players say 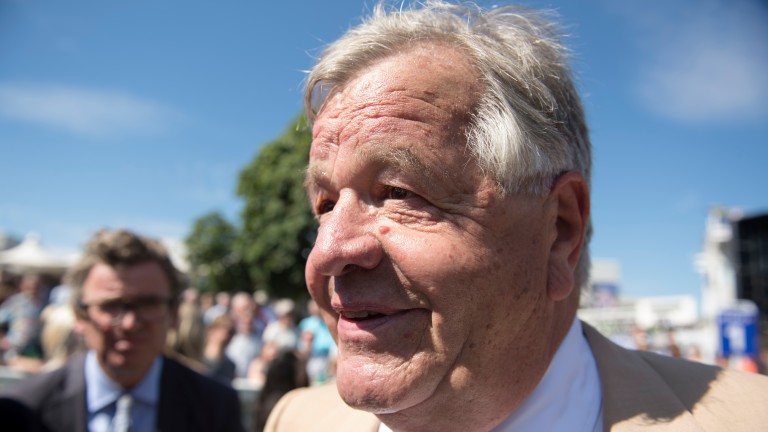 1. How good was Expert Eye's maiden?

Not many Sir Michael Stoute-trained juveniles make a successful racecourse debut, fewer still in June, so Expert Eye's ready win at Newbury is certainly notable and it is no surprise to see him quickly stepped up in grade.

There are competing forces at play in terms of the strength of form. Runner-up Mutakatif, odds on that day and next time, has not lived up to expectations so far. On the other hand, both the third and fourth won next time.

2. Which side of James Garfield's pedigree will win out?

Not many will move from the Windsor Castle Stakes to this race exactly six weeks later, but that is precisely what James Garfield will do. He has stopped off at Doncaster in between, running over six furlongs as he had on his debut, and came home a comfortable winner at cramped odds.

Now he steps up to seven and his dam, who won the Chesham, suggests it is a good move. His sire, plus his admittedly staying-on third over five furlongs at Royal Ascot, pulls the other way. He is an exciting first Group-race runner for his trainer George Scott.

3. How quickly is Mildenberger improving?

It is a mere 25 days since Mildenberger made his debut at Haydock. Even so, few could argue with his place in this line up, especially following his win at Newbury a week past Friday, when he looked Group-race ready in winning by five lengths.

His maturity was notable at Newbury, so he could just be a quick learner. Still, any sort of improvement, be it mental or physical, is likely to put him in the shake-up here.

Hugo Palmer, trainer of Curiosity
This race has been the plan for a long time provided he could win a second novice event under a penalty, which he did at Ascot. He's a clean-actioned colt and I wouldn't want to run him on ground that's too soft, so we're in the Big Orange camp of not wanting much more rain. If that happens, we'll go to the Washington Singer instead. He's a neat, balanced colt and I think Goodwood will suit him.

George Scott, trainer of James Garfield
We've been very pleased with him since Doncaster. We ran him in the Windsor Castle because we deemed it to be the weakest of the two-year-old races at Royal Ascot. Had there been a six furlong Listed race we'd have run in that, and I've always thought he'd be suited by seven or a mile – he's a rangy, scopey sort of horse. He has the experience and the hope is that a seven-furlong Group race might be just the right race for him, allowing him to travel without being behind the bridle all the way.

Charlie Johnston, assistant to Mark Johnston, trainer of Mildenberger
He went to Newbury as a trial for this race, thinking that if he won there under a penalty he'd be worth trying in this and it's fair to say he passed with flying colours. He had to go through a false start at Newbury and took it all in his stride, Oisin was quite taken with him. This is a different course to the flat, galloping ones he's run on so far and he's a big, scopey horse, but he's good enough to be running in races like this.

Richard Hannon, trainer of Sallab
He won despite the track last time and appears to have improved since then. He's a lovely big colt but this is a big step up for him. If he could finish in the first three I'd be delighted.

Aidan O'Brien, trainer of Seahenge
He was very green when he won at Naas. He's up one furlong in trip and seems in good form. Hopefully, he'll run well and the experience should do him good.

Charlie Appleby, trainer of Zaman
He's progressing with each run and has come out of the Superlative Stakes well. His win at Pontefract earlier in July has received a couple of form boosts. He has to improve again and we have added blinkers for the first time to assist him.

FIRST PUBLISHED 6:00PM, JUL 31 2017
He won despite the track last time and appears to have improved since then

'Life moves on' - Sir Michael Stoute looks forward after his most painful year Cheltenham, Aintree - and now Ascot? De Bromhead adds filly to Coronation mix Foot abscess forces Royal Ascot favourite Bay Bridge out of King Edward VII 'Plenty of options' as one-time Derby hope Highest Ground bounces back My Sister Sarah and Metaphorical contribute to Wayne Lordan's treble Size is everything after all as Snowfall and Adayar shoulder their rivals aside