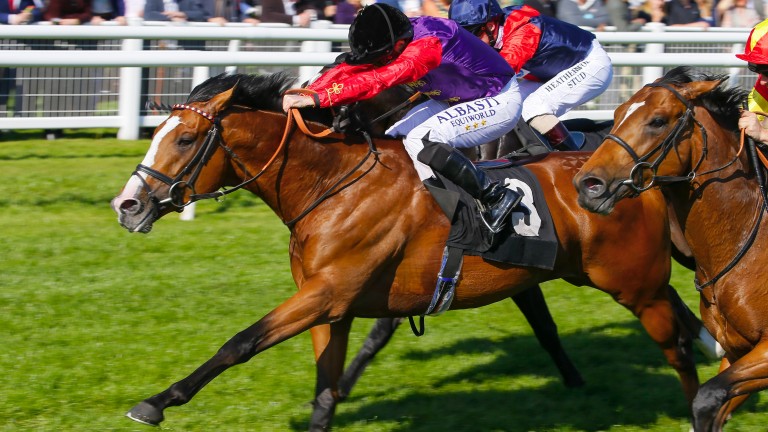 The Queen, who won this contest two years ago with Peacock, is represented by Call To Mind, a colt who, intriguingly, is still in the Derby at as short as 20-1 with some firms (33-1 best).

The William Haggas-trained son of Galileo made a winning debut at Newbury in April, sticking on gamely to deny Commander by a neck. He is a brother to Recorder, who was trained by Haggas to win the Group 3 Acomb Stakes, and is stepping up to stakes level for the first time.

A convincing success would certainly prompt serious questions to connections over an Epsom bid. How they may be answered is, for now at least, a matter of pure conjecture.

Godolphin are two-handed in this race with the promising Leshlaa and Valcartier, both of whom were winners last time out.

Favourable record
Five favourites or joint-favourites have obliged in the last ten runnings so it's worth keeping an eye on who the market favours.

Future stars
The contest has produced a number of Group winners over the years including 2012 Melbourne Cup hero Green Moon and St Leger scorer Lucarno.

Marco Botti, trainer of Zumurudee
He's a nice horse and didn't handle the dirt when he ran in Dubai. The soft ground shouldn't be a problem for him.

John Gosden, trainer of Valcartier
We're stepping him up in class as he won his maiden nicely at Nottingham where he stayed on well over a mile and looks as if he wanted further. Hopefully he'll handle the soft ground and he goes there in good shape.

William Haggas, trainer of Call To Mind
He seems well and we think he's come on for having his first run. I'm not sure about the soft ground at all but his brother Recorder seemed to enjoy it so we hope for the best.

John Ryan, trainer of Grey Britain
We've been thinking especially after his last run that the step up to a mile and a quarter would suit. The soft ground is a big unknown for everyone as it looks like its gone quite extreme but he's handled it at home. Jimmy Fortune is back on board, who has ridden him a couple of times, and sort of knows the horse which is a big help with him stepping up in trip.

FIRST PUBLISHED 6:26PM, MAY 19 2017
We think he's come on for having his first run. I'm not sure about the soft ground at all but his brother Recorder seemed to enjoy it