The New One shows customary grit to land hat-trick 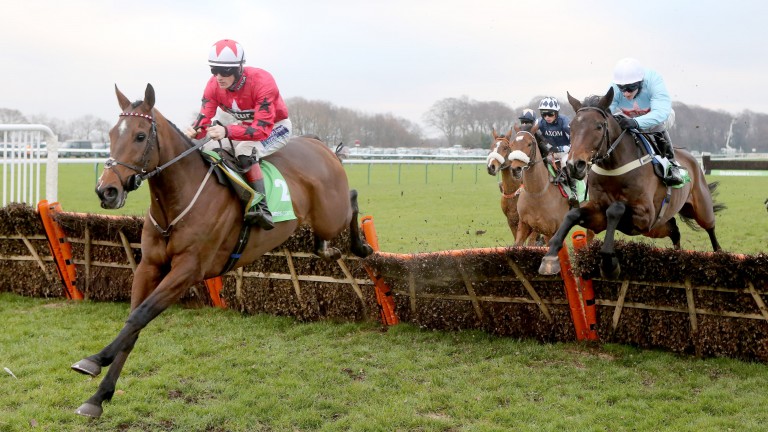 The New One: lands the Champion Hurdle Trial under Sam Twiston-Davies
John Grossick (racingpost.com/photos)
1 of 1
By Andrew Dietz 3:01PM, JAN 23 2017

Winning ugly is a lauded attribute in high-level sport, something the very best participants and teams do to extend their dominance over a period of time.

It is a trait The New One has mastered down the years, particularly when running in the depths of winter at Haydock, and he had to rely on his customary courage to scramble to a third consecutive success in the Champion Hurdle Trial.

Each victory in this Grade 2 has been hard work – his previous wins were achieved by two and a quarter lengths – but Nigel Twiston-Davies's stable star had to dig deeper than ever to overhaul Clyne and get up by a length at the line.

"He's very courageous and is a proper racehorse," said the winning trainer. "He's the sort of horse we dream about. I'm proud to be a part of him all these years and he's nudging towards £1million in total prize-money."

Having had a chase career put on hold earlier in the season, The New One, whose record outside of Grade 1 company stands at 16 wins from 17 starts, has returned to complete a 'double treble' after also winning the International Hurdle for a record-equalling third time last month.

A return to the Stan James Champion Hurdle in March, in which he has finished third (2014), fifth (2015) and fourth (2016), is dominating the thoughts of Twiston-Davies despite murmurings the Sun Bets Stayers' Hurdle might be more suitable.

"We've everything covered, but at the moment I think we're going the Champion Hurdle. It's worth another go, I'd have thought. I don't think he really stays but he won't run again until Cheltenham and it gives us time to think about it."

While there is no doubting The New One's resolution, bookmakers were generally unmoved by the victory and he can be backed at 20-1 for both the Champion and Stayers' Hurdles.

The last time Clyne was in action he won the race that should not have been run here in extremely thick fog, but there was no missing the Evan Williams-trained seven-year-old as he made a bold bid from the front, eventually splitting two proven Grade 1 performers with L'Ami Serge in third.

"He has run an absolute screecher," said Clyne's owner David Williams. "I'm absolutely thrilled to finish second to a brilliant horse like The New One. He is entered for the Betfair Hurdle and he could go for that."

A switch back to fences looks likely for L'Ami Serge, who travelled well into contention but flattened out when asked to quicken.

Trainer Nicky Henderson said: "That didn't tell us a great deal, except that he won't win the Champion Hurdle. He might go back chasing."

He comes back year after year and is one of those horses that deals with the conditions on the day and does what he has to do.

He has a lot of class and never lets you down. He's won this race three years in a row and is unbeaten at the track in four starts but every time he comes here he wins ugly.

He didn't jump a hurdle down the straight - he knocked out the third and the second last - and it was slightly different today as he hung a little left but he's shown exceptional courage.

He looks a proper stayer to me but I have to be careful what I say because I've got to share a car home with Nige.

As a jockey you want winners, so I'd love to have a go at the Stayers' Hurdle. I think he'd be running round in second gear and if he had anything left at the last he'd go close.

FIRST PUBLISHED 3:19PM, JAN 21 2017
I'm proud to be a part of him all these years and he's nudging towards £1million in total prize-money