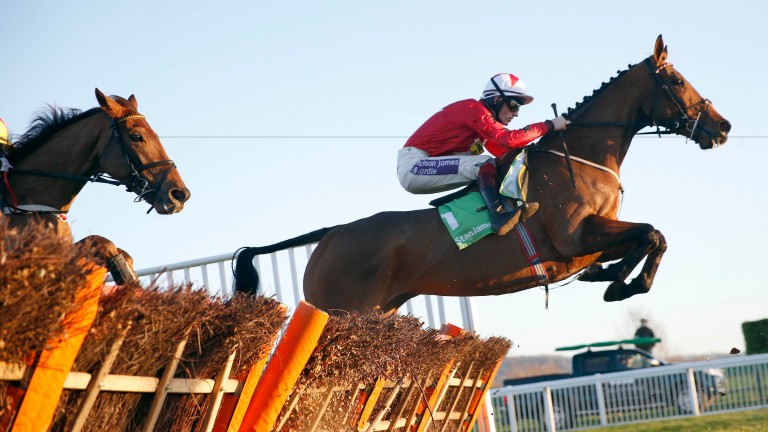 The New One is to stick to what he knows best and remain over hurdles at Cheltenham on Saturday, where he will bid to win the StanJames.Com International Hurdle for the third time.

Nigel Twiston-Davies has been forced to find a plan B for his stable star after his much anticipated debut over fences was frozen off at Exeter last Sunday.

Winner of 13 races over hurdles, The New One is thought likely to use Saturday's contest as a warm up for novice chasing – although connections are not ruling out a further postponement of his second career if the eight-year-old were to win the Grade 2 easily.

Twiston-Davies, who saddled The New One to win the race in 2013 and 2014, said on Monday: "The original plan was to run at Exeter but disappointingly that was off so we had to look at other options. It makes sense to run him in the International as he's won it twice and it's worth £130,000.

"There aren't any novice chases with that sort of money around and we hope we can get some of it. The plan after Saturday remains to put him over fences, but if he were to win with his head in his chest then we may have a rethink."

There are a lack of British-trained Champion Hurdle contenders at this stage, with The New One a 66-1 shot with Stan James.

The New One, who is 4-1 third favourite with the race sponsor for this Saturday's feature, is likely to face old foes such as My Tent Or Yours and Melodic Rendezvous, but could be set a sterner test from emerging pretenders like Yanworth, who was installed 7-4 favourite and is currently the shortest-priced British-trained horse in the Champion Hurdle market at 14-1.

Nicky Henderson intends running not just My Tent Or Yours – second favourite at 7-2 – but also Hargam.

He said: "There's every possibility both will run – that's the plan at the moment. Good ground will help them both and, looking at the forecast, that's what I hope we'll get.

"It was a very messy race for My Tent Or Yours at Haydock on bottomless ground and we all know he doesn't like that. The problem was we needed to get a run into him.

"Hargam is a handicapper who cannot run in a handicap because he gets so much weight. We got lucky he won a nice Listed race but he isn't good enough to win a Grade 1. It's good prize-money on Saturday and he'll take his chance."

Of the two Irish-trained entries, Labaik is unlikely to run according to Gordon Elliott, while Willie Mullins is undecided about whether Ivan Grozny will line up.

FIRST PUBLISHED 5:05PM, DEC 5 2016
The plan after Saturday remains to put him over fences, but if he were to win with his head in his chest then we may have a rethink