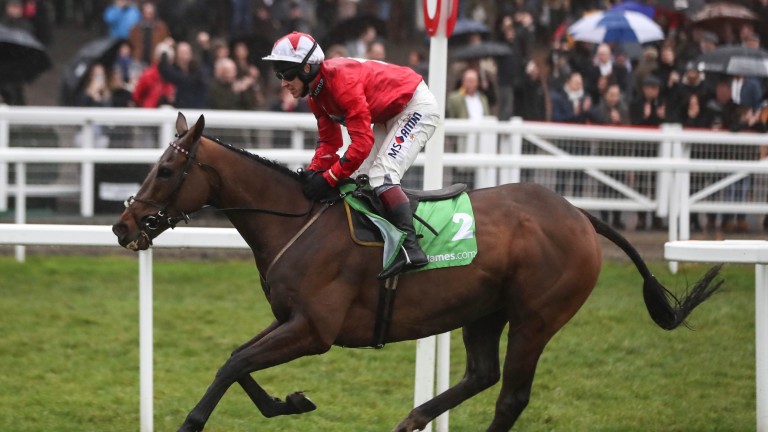 Just over a month since winning the International Hurdle at Cheltenham for a record-equaling third time, The New One attempts to repeat the feat in a contest in which he has landed the odds for the past two years.

Today's renewal promises to be a stiffer test, however, with Nigel Twiston-Davies' star opposed by Nicky Henderson's L'Ami Serge and the classy Irving among others.

Twiston-Davies has already reaped reward for postponing the chasing career of The New One, something that connections of L'Ami Serge will be hoping to match after their seven-year-old reverted to hurdling at Cheltenham on New Year's Day.

They will have to fend off leading conditional rider Harry Cobden who is reunited with Irving – the horse that gave him his most significant win to date in the Fighting Fifth Hurdle at Newcastle in November.

As well as The New One, 2014 winner Melodic Rendezvous is making his third appearance in today's race having since finished third a year ago.

Paul Nicholls, trainer of Irving
He's fine, we purposely kept him fresh for this after the Fighting Fifth. Some say he was lucky that day because the other one [Petit Mouchoir] fell, but he lacked a run and had just hit the front and was idling. But the form has worked out very well. He's got a Grade 1 penalty like The New One. He's won at the track, goes well fresh, and I'm hopeful of good run.

Nigel Twiston-Davies, trainer of The New One
He likes Haydock and is the best hurdler in the race on ratings so he should win on all the evidence we have. He's been in great form at home since his second at Kempton and won't mind the ground so there are plenty of positives.

Evan Williams, trainer of Clyne
I never thought we would be where we are with him. He has been very progressive at Haydock and absolutely loves the place. I think it's one of those horses for courses tracks, so why not give it a go?

Malcolm Jefferson, trainer of Cyrus Darius
It was a question of where we were going to run him. He's meeting fit horses, whereas he's lacking a run. He's as fit as I can get him at home. I'd just love him to run a nice race and if he comes home happy then we can start making plans. A strong pace will help him.

Anthony Bromley, racing manager to Simon Munir and Isaac Souede, owners of L'Ami Serge
We postponed his chasing career due to lack of opportunities last month as he really needs to go left-handed. We were pleased with his second on his return to hurdling at Cheltenham on New Year's Day and the plan after this is the Betfair Hurdle. He should have a decent chance getting 8lb off the smarter horses but in all honesty, The New One deserves to be even money in the race.

Jeremy Scott, trainer of Melodic Rendezvous
This is one of only four races we plan to run him in this season as he's 11 now and we are campaigning him lightly. It looks a tough race and he would have a serious chance only if the heavens opened overnight as it would inconvenience the others but not him. We might look at the Kingwell Hurdle after this.

FIRST PUBLISHED 6:00PM, JAN 20 2017
He should have a decent chance getting 8lb off the smarter horses but in all honesty, The New One deserves to be even money in the race