The New One completes his hat-trick in Cheltenham feature 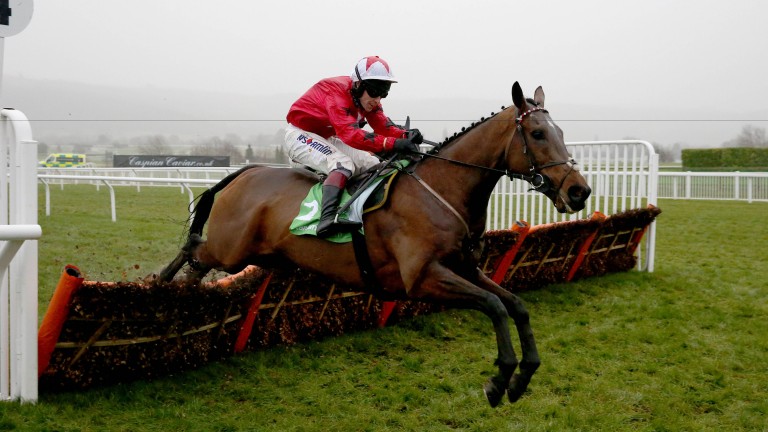 Nigel Twiston-Davies abandoned the new to bring in the old as he was forced to ditch a chasing campaign for The New One after he secured a record-equalling third victory in the stanjames.com International Hurdle on Saturday.

Last month's loss of racing at Exeter to frost, when The New One was declared in a novice chase, was "the best abandonment that ever happened", according to the jubilant trainer, who refocused long-term sights on a fourth tilt at the Stan James Champion Hurdle, in which he has finished fourth, fifth and third.

In a changed bit, recommended by eventer Andrew Nicholson, and in a change of tactics, The New One made all under Richard Johnson to defeat old foe My Tent Or Yours – who was in receipt of 8lb – by three and a half lengths. In the process he joined Relkeel and Birds Nest as a three-time winner of the Grade 2 prize.

"I must send a Christmas card to Exeter. Chasing is well out of my mind and we'll bash on towards another Champion Hurdle.

"He probably isn't quite good enough now. He certainly was three years ago, when he was unlucky not to win. With different riding tactics now he is going straight maybe he can do it."

The New One, who was due to be ridden by Ryan Hatch until he was injured in a fall on Friday, was made a best-priced 25-1 shot for the Champion Hurdle by the race sponsor, but he will get an entry in the World Hurdle too.

Twiston-Davies said the input of New Zealander Nicholson, a six-time Olympian who is based in Britain, had made "a huge difference".

He said: "The New One has had this bias towards jumping to the right. It didn't happen today but you couldn't take him in front because of that.

"We'll look at the Christmas Hurdle but there's the race at Haydock in the middle of January which could be the one.

"He's been around ages and has been nudging superstar status without ever quite making it. It's lovely when it works like that."

My Tent Or Yours, who had been so disappointing at Haydock previously, pressed The New One all the way to the finish without getting alongside, though he finished 12 lengths clear of Old Guard.

The rain that fell continuously through the afternoon was not to My Tent Or Yours' advantage and trainer Nicky Henderson said: "I can't say the mistake he made was the difference between winning and losing. If it was yesterday it could have been, given the rain today, although The New One goes on better ground too.

"If Exeter had been on and The New One run there then we would have been rather impressive. We had to come here because the plan is for Yanworth to go to Kempton. We might just have to keep him for the spring."

FIRST PUBLISHED 3:45PM, DEC 10 2016
Chasing is well out of my mind to next year and we will bash on towards another Champion Hurdle