He saddles Australia's best chance of retaining the Cup in Avilius 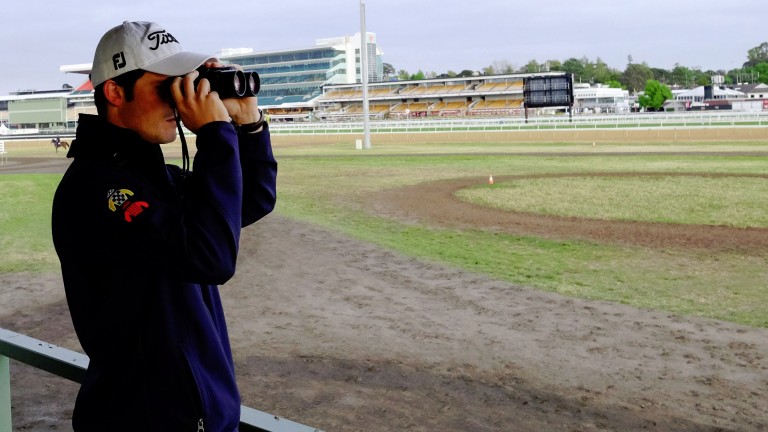 Nobody understands how special the Lexus Melbourne Cup is to Australians quite like the Cummings family. It is a race they will forever be inextricably linked with after the legendary Bart won the race that stops the nation a staggering 12 times.

So when his grandson James, who was Bart's co-trainer from August 2013 until his passing two years later when he took over the licence himself, says "it's like no other race in the calendar year", he means it. But even he cannot quite put his finger on what it is that makes the Cup so special, despite there being A$7.3 million reasons.

"It's the biggest race we have in Australia," he says. "It has a Grand Final feel to it like no other event we've got. In a funny way we're not famous for the strength of our staying horses but we certainly have a famous two-mile race, the biggest two-mile handicap in the world, and handicapping in Australia goes right back to the very start of our passion and love for racing.

"That the underdog, or the lesser horses, are given their chance and there's a cat-and-mouse game to be played at all times in the lead-up, qualifying horses and then getting them in. And then there are the brave, well-performed warriors that have to shoulder those burdens and do it so well."

Really warming to the task he adds: "The internationalisation of the competition and the imported horses trained locally have done nothing but add interest, argument and speculation into the event, and I've run horses in it and I just know what it means without being able to put my finger on it completely.

"I know how it makes you feel as someone involved, you get to the races on Tuesday and everyone knows the Melbourne Cup's being run. There's no other race in Australia you can say that about."

That is how much the Melbourne Cup means when you are a Cummings.

Most of Australia has spent the last 50 years backing Cummings in the Cup and this year it will be no different with James saddling the shortest-priced locally-trained horse in Godolphin's Avilius.

He has won four times since joining Cummings from Andre Fabre and was last seen finishing a good fourth behind Winx in the Cox Plate. James has prepared him very much the Bart way.

One of Bart's big mantras when it came to the Cup was that a horse should have raced over 10,000m in their prep for the race that stops a nation. So where does James have Avilius? "It's 10,040m," he laughs. That is not a coincidence.

He says: "Last week Glyn Schofield [who rides Avilius] rang me and said, 'James, I'm disappointed in you because I've calculated your horse is 60m short of reaching his 10,000m before the Cup', and I said, 'Well Glyn, I've been watching Punters Intel', which is an app we have that shows top speed, average speed, distance travelled away from the rail, stuff like that, 'and every time you've ridden him you've been 15m away from the rail, so there's your 60m', and he said, 'Touche'.

"Then I reminded him the Bart Cummings is 2,500m not 2,400m so actually his calculations were wrong and he needed to sharpen his pencil."

When it comes to the Cup, the Cummings' pencils are sharp.

When Bart took out his training licence 65 years ago he bought himself a book, and in it he noted down what worked and what did not with his star performers over the years. That book is now in the possession of James and, while he still consults it, he learned as much from his grandfather that was never written down.

"There are a few little pieces of Bart's writing and sometimes I look back over it and chuckle, but the teachings he gave me from one set of circumstances to the next I often take with me," he says.

"When you grow up in the household of a racing family – my father was a trainer, my grandfather, my great grandfather was also training horses – there's a whole period of osmosis that leaves upon you a lot of lessons and gives you the confidence you know what to do when various situations and problems crop up in front of you.

"It's not just the odd piece of writing I can reflect on, it's a lifetime of lessons that I can draw upon to do the right thing."

That lifetime of teaching meant Avilius's win two starts back, in the win-and-you're-in race named after his famous grandfather, was a massive moment.

He says: "It was extra special. The guys were happy to let me keep the owners' trophy in the office and there's probably no more valued Group 3 trophy that I have anywhere." 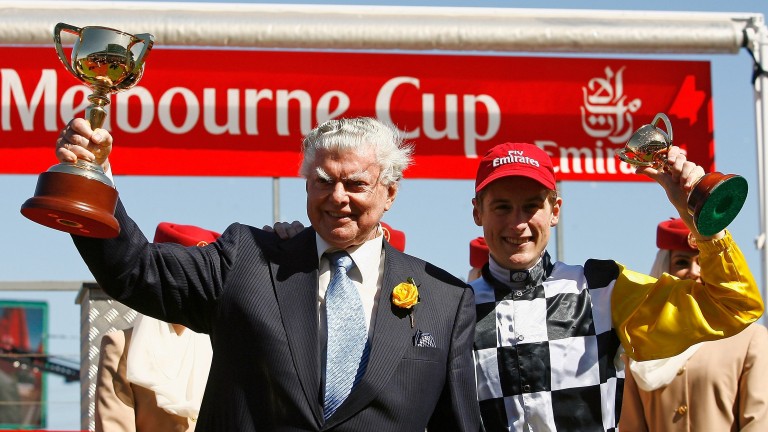 If he is feeling the pressure of carrying the Cummings name into the Cup, of saddling Australia's best hope of winning their race and of trying to give Sheikh Mohammed, who became his boss 18 months ago, a first win in one of the races he most covets – he is not showing it and adds: "I'll be solely focused on the horse in the build-up and putting all the noise of that pressure out of my mind as much as I can."

So what of that horse? Avilius lost his unbeaten record in Australia when fourth behind wondermare Winx in the Cox Plate, but, as Cummings says: "Winx form's great form for a horse capable of staying two miles.

"He's come through the Cox Plate in great style, is full of energy and is looking for two miles. He raced that way and he's going to enjoy getting back to Flemington, where he was a winner two starts ago.

"We can't have him any better, which is all we can worry about, so we'll just keep things perfect between now and Tuesday.

"We'll just keep doing his normal work, the work I've been shown to do. He's able to cope with it and that's the important thing about Avilius; he pulled up from the Cox Plate in good style but it was like he'd not even had a run and he'll continue the normal programme."

Cummings is willing to label Avilius the best chance he has ever had of adding his name to the trophy his grandfather's so heavily adorns.

"I've had a couple of runners in the race but he'd be the best of them," says Cummings, who believes he has played that game of cat-and-mouse with head handicapper Greg Carpenter as well as he could have.

"We would have started even-money in the Group 1 Metropolitan if we'd gone there, but we skipped it to run in the qualifying race," says Cummings.

"We got in and have been able to do as we please since winning the Bart Cummings and that's definitely in Avilius's favour as we've not had any stress about when he needs to be fit or where he needs to be running – all we needed to do from that day on is worry about the race on Tuesday."

Cummings should not worry too much, the Melbourne Cup is a moment for which he was born ready.

Like any Australian racing fan James has his own personal favourite of Bart's 12 Cup winners, and like any racing fan one soon becomes three. He says: "It's probably his last win [Viewed in 2008]. But I think So You Think's bold effort to hold out for third after being keen all the way would have to be up there, and it was a hell of an effort to train a horse like Saintly to win a Melbourne Cup.

"Coming through the mile and a half run in the Metropolitan, getting beat and dropping back for the Cox Plate, winning that and then a Melbourne Cup with a horse he didn't only just train but he owned it and he bred the horse off his own farm.

"You find me anyone on earth who's going to be able to breed a horse, train it and own it to win a Melbourne Cup. I don't think you'll see that ever again."

FIRST PUBLISHED 6:00PM, NOV 4 2018
You get to the races on Tuesday and everyone knows the Melbourne Cup's being run. There's no other race in Australia you can say that about