The Greatest Ever Race RICHARD FORRISTAL 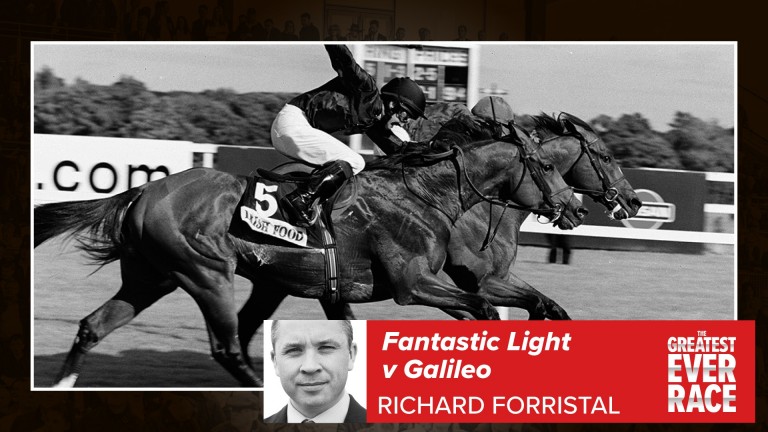 Voting has now closed for The Greatest Ever Race but you can still read our ten fantastic articles. Below, Ireland editor Richard Forristal nominates the battle between Fantastic Light and Galileo in the 2001 Irish Champion Stakes at Leopardstown. The winner will be announced at racingpost.com at 6pm on Saturday, July 23.

At the heart of this series is a nostalgic penchant for days of yore, fuelled as it is by wistful recollections of seminal racecourse clashes that grow rather than diminish in legend as the years go by.

Of course, we will always relish such seismic jousts in the moment, but the concept's essence is to celebrate the ones that endure far beyond. The inevitable upshot is that a passage of time implicitly underpins the criteria, so the fact that most people asked will go for races before the turn of the millennium maybe isn't surprising.

From this remove, the timing and context of Galileo and Fantastic Light's epic duel in the Irish Champion Stakes at Leopardstown is intriguing because it took place three days before one of the single most earth-shattering atrocities since World War II.

On September 11, 2001, two commercial airplanes were hijacked by Al Qaeda terrorists and flown into New York City's World Trade Center twin towers, while another hit the Pentagon near Washington and a fourth crashed in a field outside Pennsylvania. Nearly 3,000 people perished. It constituted the end of innocence for this generation because, all of a sudden, the vitriolic lexicon of terrorism, suicide bombing and warfare contaminated the broader consciousness on a global scale in a way that most of us hadn't experienced before.

Galileo and Fantastic Light brought the curtain down on their respective careers at Belmont Park weeks after the world turned upside down. The New York track is situated just 12 miles from Ground Zero and the Breeders' Cup was among the first major international sporting events to live the new reality. Police dogs searched cars entering the Belmont parking lot, soldiers armed with assault rifles were stationed throughout and snipers were positioned on the grandstand rooftop. We weren't in Kansas any more. 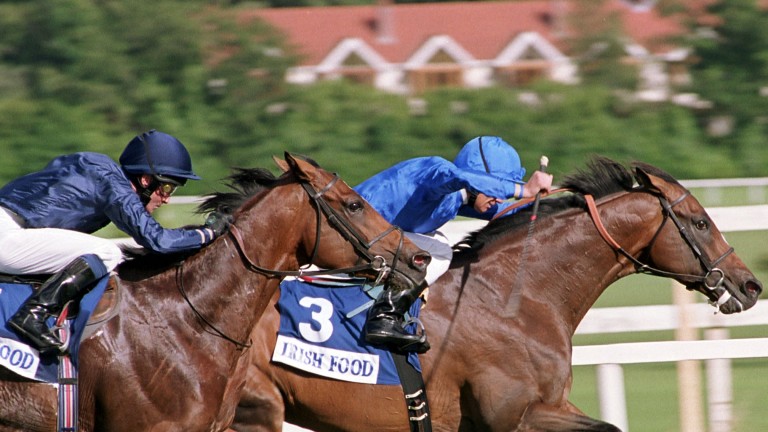 On reflection, then, the absorbing Leopardstown tussle between Galileo and Fantastic Light fell just on the right side of the simpler times watershed. It qualifies as a time worth harking back to, and the micro-context surrounding the race was compelling.

Coolmore and Ballydoyle had already been around for a long time, as had Sheikh Mohammed and his Darley operation. However, Aidan O'Brien was in the infancy of his Flat career, while the Godolphin entity was still forming its unassailable identity. The previous year, Giant's Causeway and Dubai Millennium had carried all before them, signalling the extent to which we were witnessing the emergence of two rival behemoths.

In between, O'Brien unleashed the third progeny of Urban Sea, a gorgeous two-year-old son of Sadler's Wells who bolted up by 14 lengths on his Leopardstown debut for Mick Kinane.

Galileo went on to become the poster boy for O'Brien's rapidly escalating ambitions. He arrived at Epsom on June 9, 2001, unbeaten after three starts, and duly stamped his authority all over the opposition to secure the bespectacled young trainer his first Derby.

Sandwiched either side of that landmark Classic triumph were the latest manifestations of Fantastic Light's arrival in the big time. Now five years old, he squeezed home in the Tattersalls Gold Cup at the Curragh before readily dispensing with Kalanisi in the Prince of Wales's Stakes at Royal Ascot.

He was coming of age pretty spectacularly, suddenly an irresistible force hurtling headlong towards Galileo's immovable object in the King George VI and Queen Elizabeth Diamond Stakes at Ascot. There, the Derby winner was sent off odds-on.

When he skipped away in the straight, the outcome looked a formality, but then Dettori finally extricated Fantastic Light from behind a wall of horses to challenge wide, possibly even edging to the front a furlong out.

In response, Galileo did what we now expect his progeny to do, knuckling down for a scrap before eventually pulling two lengths clear. It was decisive, but not to the extent that Sheikh Mohammed and his late brother Sheikh Hamdan Al Maktoum didn't see enough to roll up for a rematch at Leopardstown. The day before the Irish Champion Stakes, Dettori was summoned to Kildangan Stud and found himself seated between both men. They had a plan.

"I was told I had to be in front of Galileo through the race as that was the only way to beat him," Dettori recalled later. "That was not my opinion. I felt the best way of riding Fantastic Light was to come with a late run with something to aim at. I explained that to them but lost the argument. I left the meeting convinced they were making me do the wrong thing."

It all made for one of the great tactical contretemps of its era, one that was very much of its time in O'Brien versus Bin Suroor and Kinane versus Dettori but, in Coolmore and Darley, it epitomised the superpower duopoly that would shape the next two decades. 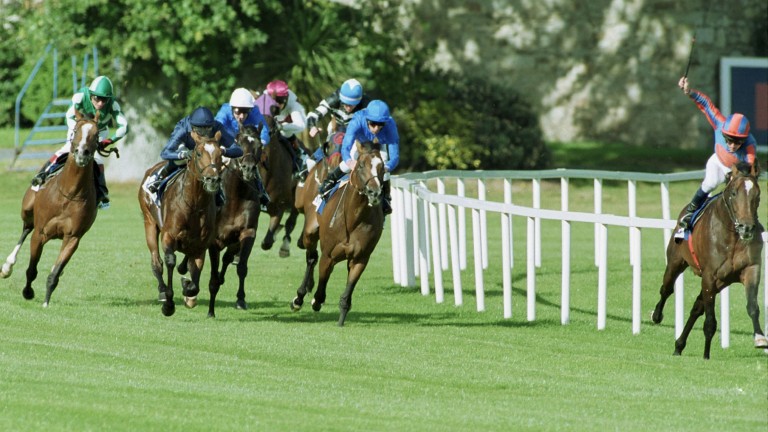 When the stalls opened at Leopardstown, PJ Scallan let Ballydoyle's pacemaker Ice Dancer rip in front. However, it was Godolphin's Give The Slip who played the most vital role under Richard Hills, ignoring the tearaway leader and towing Dettori into the race.

Kinane tracked Fantastic Light but, dropped back in trip, it looked as though Galileo was at the pin of his collar early on. His rider couldn't dictate the terms of engagement and, by the time Galileo had found his equilibrium and loomed up turning in, Dettori had first run. Hills opened the door and he slipped up his inside. In a game of inches, Kinane had lost yards.

Still, Galileo found for pressure and they eyeballed each other all the way up the straight. It was utterly absorbing to witness. Racing the width of a cigarette paper apart, Kinane coaxed Galileo alongside Fantastic Light inside the distance, but Dettori's mount was brave. He stuck his neck out and his head down, eking home by a head to settle the score.

It wasn't the result a majority in Leopardstown's packed stands might have wished for, but the duel lifted the roof off the Dublin venue. They lapped it up and both horses surfed back in on a raucous wave of applause.

"When we crossed the line I was mentally and physically exhausted," Dettori would reflect. "After pulling up, Richard Hills came to me and asked if I had won. When I told him I had, he asked me why I wasn't celebrating. I told him I was too drained. 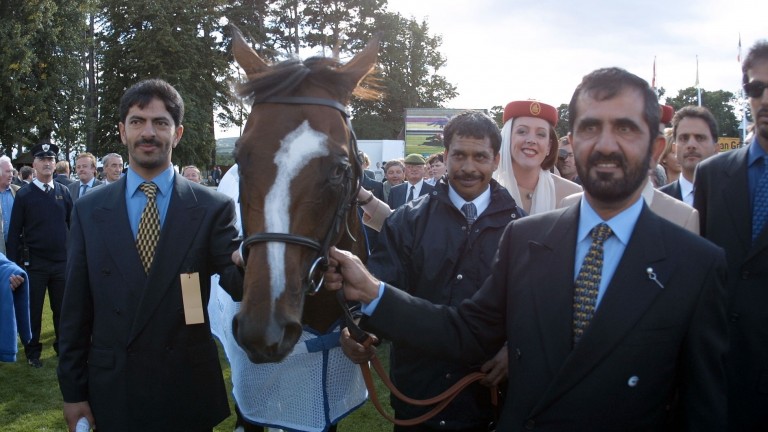 "Afterwards, the reception both horses got from the crowd was like they were both winners. That's what made it for me. It was electric."

At the time, Kinane might not have appreciated the magnificence of the spectacle. His currency was always victory, although he later acknowledged the majesty of it all.

"The pacemaking jockeys are as important as the guys riding the number one strings," he would muse of the strategy.

"A pacemaker can allow you to play your horse to his strengths and that's what Richard did for Frankie. He ignored Ice Dancer and got Godolphin into a controlling position. He made all the right moves and Frankie was able to slip through on his inside. It meant I had a length to find, which I wouldn't otherwise have needed to find. That could have been the difference between winning and losing. They got the tactics right. We didn't."

Galileo's first defeat wasn't his last. Desperate to crack the Breeders’ Cup Classic, O’Brien rolled the big dice with him in Belmont the following month. He never landed a blow as Tiznow shaded a vintage dust-up with Godolphin's Sakhee, shortly after Fantastic Light had claimed another Ballydoyle scalp when seeing off the St Leger hero Milan in the Turf.

Neither Galileo nor Fantastic Light graced the track again and, while the Godolphin horse finished with the upper hand on the racecourse, we all know who had the final say in the breeding shed.

Nonetheless, their enthralling on-track legacy stands for itself. In short, what they conspired to serve up at both Ascot and Leopardstown was a rivalry for the ages. Trust John Francome to capture it in a nutshell on Channel 4 just after they crossed the line in the rematch.

"What a fabulous race," Francome cooed.

"Fantastic Light was in front of Galileo most of the way around and you have got to hand it to Frankie Dettori, he has ridden this race to absolute perfection. Plenty of people would have thought Galileo was going to win in the straight, but this little horse just didn't know when to give up. They are two fabulous horses. The race promised plenty and it didn't disappoint."

'Everything worked out as we had planned it'

Everybody seemed to want to see this race, between two great horses, so it was an exciting time for everybody and everything went 100 per cent perfect for us.

Fantastic Light was doing well before the race, working nicely and in good condition, so everything was spot on, and we had Give The Slip in the field to make a strong pace for us. He wasn't good enough to beat the other two, but he was a Group 3 winner and with Richard Hills on board he did exactly the job we needed him to.

Everything was carefully prepared. The team discussed beforehand how we could win the race. We knew Galileo was a champion who would be hard to beat. He had already beaten us over a mile and a half in the King George, but we had a pull in the weights over two furlongs less so we wanted to take him on from the start, and everything worked out perfectly as we planned it.

The other pacemaker [Ice Dancer] went clear of everybody but Richard was travelling well in behind and he was one of the best jockeys in the country, so he knew what speed they were going, saw that the leader was going too fast and he rode his race to suit our horse, leading the rest of the field at a strong pace from the beginning.

As the leaders turned for home, there was room on the rail for Fantastic Light to get through and in the last couple of furlongs you saw an incredible challenge between two top horses, which was what people watching all around the world were hoping for.

In the last half-furlong there was still not much between them, but Fantastic Light put his head down and battled, and with two good jockeys on our side we were just able to win. Frankie was a superstar, he's still the best, and it was a great ride that made the crucial difference between winning and losing.

That win made a lot of people very happy. Sheikh Mohammed and Sheikh Maktoum were both there to see what was such an important meeting of two champions, and people still remember it after 21 years. I think it was one of the best races I've ever seen.