The Greatest Ever Race LEE MOTTERSHEAD 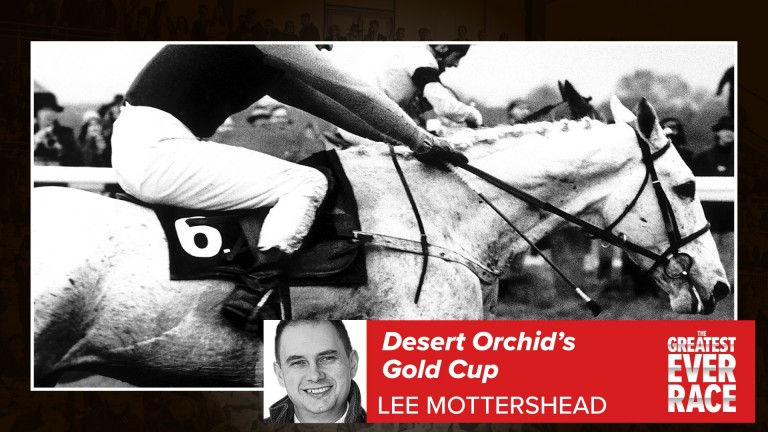 Voting has now closed for The Greatest Ever Race but you can still read our ten fantastic articles. Below, racing writer of the year Lee Mottershead nominates Desert Orchid's 1989 Cheltenham Gold Cup triumph. The winner will be announced at racingpost.com at 6pm on Saturday, July 23.

All too often when a mighty thoroughbred reaches a certain level of fame or wins a certain number of races, the animal takes on the mantle of being "the people's horse".

The harsh reality is that in most of those cases most of the people have never heard of that horse, no matter how popular or celebrated he or she might be in our own parish. Only in the rarest circumstances is a star of this sport also a star outside this sport.

One of the very rarest, wonderful and most cherished examples of such a star was Desert Orchid.

He was indisputably the people's horse. Those who had not even a passing interest in racing were aware of the flying grey. He was a sporting hero, the nation's pet and a national treasure. 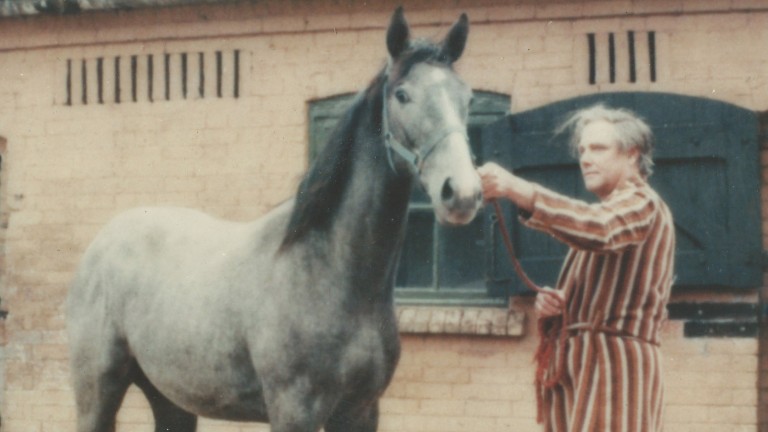 It was mid-March 1989. Desert Orchid was by that stage not simply jump racing's best-loved horse, he was its best horse. With his trademark flamboyance, he had been campaigned by David Elsworth to win a host of contests over fences and hurdles, most notably two runnings of the King George VI Chase.

He ran a lot and won a lot but he was also beaten, for Elsworth and principal owner Richard Burridge were never afraid of defeat. No jumper since then has been campaigned so boldly or brilliantly. Running him in the Gold Cup proved that.

They knew, we all knew, Desert Orchid was never at his happiest when competing on left-handed tracks, particularly when that track happened to be Cheltenham. It was a venue that significantly dulled his powers, yet to have forever swerved the Gold Cup would have been a dereliction of duty, not least given the exceptional season the then ten-year-old had been enjoying under Simon Sherwood.

It really had been the perfect winter. At Ascot in January he displayed his inexhaustible will to win when overhauling Panto Prince in the final uphill strides of the Victor Chandler Chase, a two-mile handicap in which 22lb separated first and second.

Just three weeks later he was at it again, this time at his beloved Sandown, where he sent the grandstands into frenzy by thwarting Pegwell Bay, a rival famed for his resilience and in receipt of 18lb.

"Oh Lord! He'll be the death of us," said John Oaksey, every bit as emotionally frazzled as those who had been watching on Channel 4. 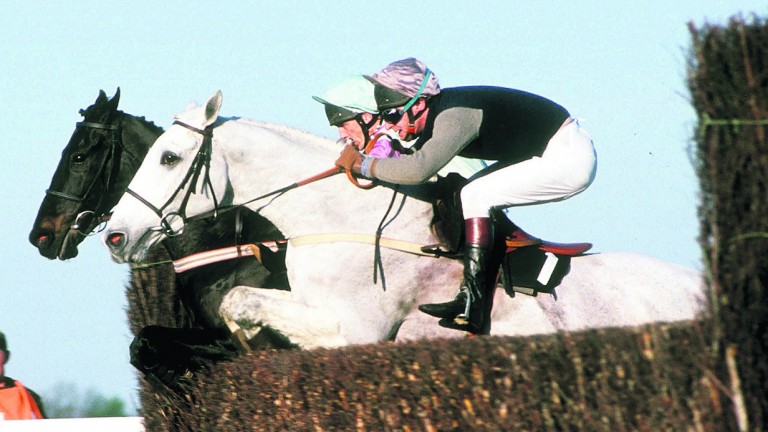 Desert Orchid simply had to go for gold. To claim the most prestigious of all the festival's prizes was this magnificent chaser's destiny. How ironic, then, that on Gold Cup day it looked as if fate, in one of her most negative moods, had ruthlessly intervened.

It would be an understatement of gargantuan proportions to say when Burridge got out of his car at Cheltenham that Thursday morning, the weather was poor. Snow nestled on the top of Cleeve Hill, while the racecourse at its foot was battered by rain that poured from a morose grey sky.

As the ground became ever softer, the mountain facing Desert Orchid became ever steeper, so much so Sherwood began to pray that the meeting's final afternoon would be postponed until the following month.

His prayers were almost answered. With rain being pumped off the track, Jockey Club stewards put on their wellington boots and braved the elements for a noon inspection. As they did so, Elsworth was in hiding.

Journalists who had spoken to Burridge got the wrong end of the stick and concluded he was edging towards declaring his horse a non-runner. On hearing this – or so the story goes – Elsworth resolved to stay out of Burridge's way, lest he was asked to withdraw the Gold Cup favourite. 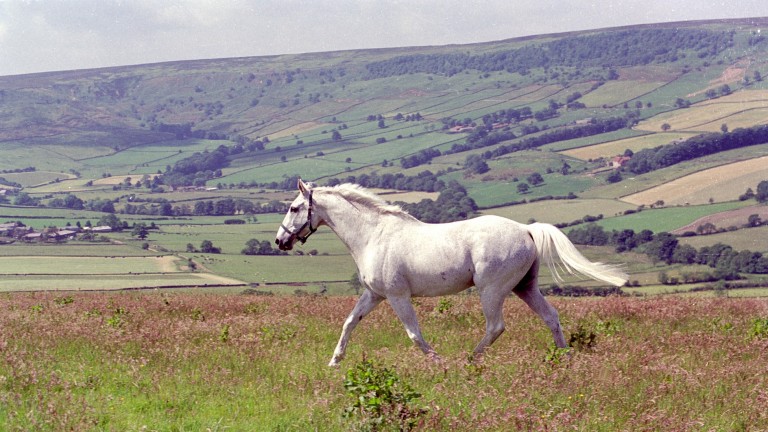 I can't remember how, but I was at home, sitting in front of the television, when the Gold Cup was run. Perhaps I was most fortuitously ill – to exactly the permissible amount and no more – that school day. Others may have succumbed to the same mild, brief malaise. A few of them might even have made it as far as Cheltenham. It was there that the ideal tonic was to be found.

The ground was heavy, there were 13 runners and Desert Orchid was the punters' choice, sent off 5-2 market leader in a showdown that featured the previous two Gold Cup victors, Charter Party and The Thinker.

Ireland's hopes were carried by the much-vaunted Carvill's Hill, while strongly fancied by many was a former festival-winning novice hurdler, Ten Plus, successful in four consecutive chase starts going into the Gold Cup and a stayer held in the highest regard by Fulke Walwyn. There was also a mud-loving handicapper called Yahoo – but you already knew that.

You actually know it all. Those who love jump racing have the 1989 Cheltenham Gold Cup indelibly embedded in their hearts.

Desert Orchid was sent off in front, attacking the field and his fences with relish, as per usual. Carvill's Hill did what trainer Jim Dreaper feared he would do and fell, getting no further than the second ditch. Heading out past the grandstands, Ten Plus was eased into the lead by his adoring jockey Kevin Mooney. He stayed there until jumping the third-last fence. He never jumped again.

Desert Orchid had loomed alongside him when it happened. As Ten Plus departed the scene, Mooney lay on the ground. On rising, the first thing he did was ask the nearest spectator if his mount had got up and galloped away. He had, but having quite clearly sustained a serious injury. Ten Plus was euthanised due to a broken fetlock. Mooney returned to the weighing room in floods of tears.

That would not have happened had the story been penned by Hollywood scriptwriters. Instead, there was a brutal reality to this most punishing of jumps races. That applied most cruelly to Ten Plus, but also to Yahoo, the 25-1 outsider who revelled in conditions that Desert Orchid hated.

He had crept into contention under Tom Morgan and led his rock-star opponent into the home straight. He held that lead over the final two fences. What followed next is what makes this the horserace which trumps all others. 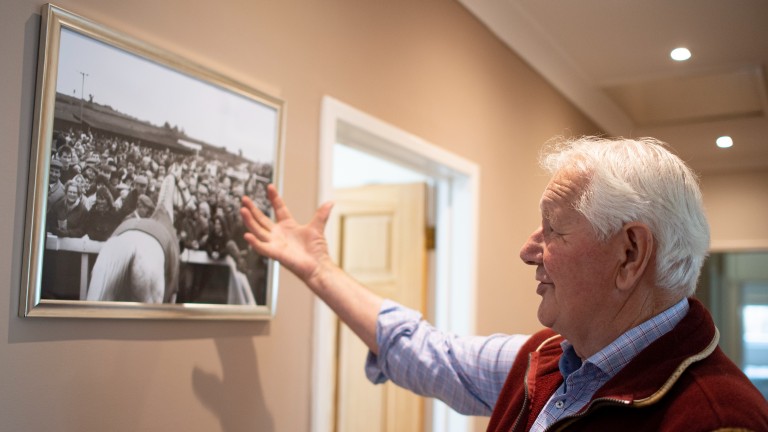 David Elsworth with a photograph of Desert Orchid at home in Newmarket
Edward Whitaker (racingpost.com/photos)

It was not accidental bravery that won Desert Orchid the Gold Cup. The ultimate equine competitor knew exactly what he was doing. Galloping away from the 22nd and final fence a length behind Yahoo, he surged forwards but also to his left. He moved closer and closer to the doomed leader, for whom none of the roars of encouragement were intended.

"If I'd not made a move to straighten him up, he'd have barged poor Yahoo off to the silver ring," said Sherwood later. It's the nearest a horse has ever come to perfecting a mic drop.

"There's a tremendous cheer from the crowd, as Desert Orchid is gonna win it," Peter O'Sullevan told those watching on the BBC, his voice filled with more than excitement. There in those famous tones was pure joy. He felt it. We all felt it.

On passing the post, Sherwood punched the air. "Dessie has done it," added O'Sullevan, quite rightly not an ounce of impartiality in his description of events. Had Morgan been able to hear the commentary he would have understood. You can be sure of that, for when Yahoo reached his nemesis, Morgan reached across and gave Desert Orchid a pat on the neck.

It remains a shame that the BBC's sound equipment suffered a malfunction during the winner's enclosure scenes that followed. One can only imagine what the noise must have been like. It was probably louder and filled with more heartfelt affection than anything heard there before or after.

Those not around at the time will have to take it on trust that Desert Orchid was revered to a degree light years beyond anything we have seen in our part of the world.

If, by the time we go to our graves, that horse and that race remain as good as it gets, there can be no complaints. Truly, we were blessed.

'He'd give you everything, every time'

Desert Orchid was a horse everyone could relate to. He wasn't wrapped up in cotton wool and was prepared to get out there in the ring on a regular basis and bare his fists.

Prior to the 1989 Gold Cup there was pressure but on the day, once we'd seen what had happened with the weather, I had in the back of my head that if it didn't happen, then the weather and the conditions gave me an escape route. If we'd gone there and conditions hadn't gone so disastrously wrong, there would have been far more pressure. 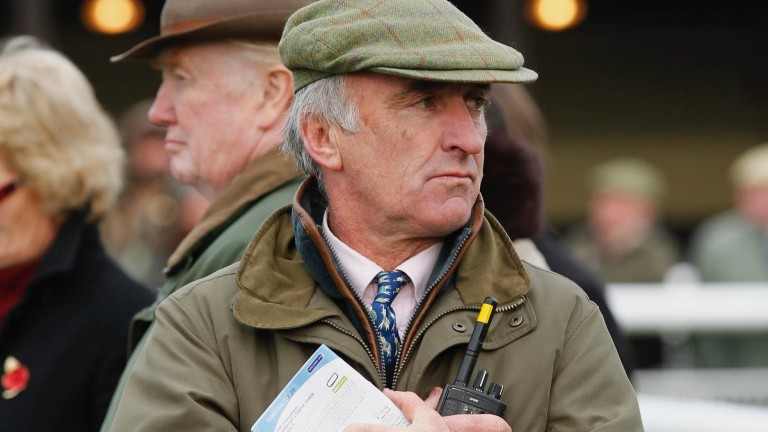 When I saw the weather I definitely thought his chance had been reduced but what I hadn't really taken on board was that the attritional conditions were going to take others out of their comfort zone and put things in our favour. We knew he stayed very well and when it was a game of attrition, he usually excelled.

He never liked going left-handed and always lent to the right going on to a fence. He just felt uncomfortable and awkward but because the ground had slowed everything up, it didn't exaggerate that problem.

He felt grand on the first circuit. The second circuit started to get more competitive and there were two or three times that I thought we were in trouble but halfway between the second-last and the last was when I suddenly thought we could nail Yahoo.

About 15 strides before the last he changed his legs and, when he pricked his ears going into the last, that's when I knew we had the petrol if I could keep the engine running.

As he landed over the last I remember hearing an almighty roar. I thought: "Right, get your head down because you've only got one chance of doing this in your life."

You're immersed in the bubble at the time and it's only a few days later that you realise the magnitude of it. It comes up in conversation on a regular basis and I appreciate how much I owe that horse. He enabled me to achieve more than I ever anticipated achieving.

He was charismatic and so honest. You got out on that racecourse and he'd give you everything, every time. I'm lucky to have been associated with such an iconic animal.