'The further he goes, the better he gets' - Gold Cup next for Emperor Of The Sun 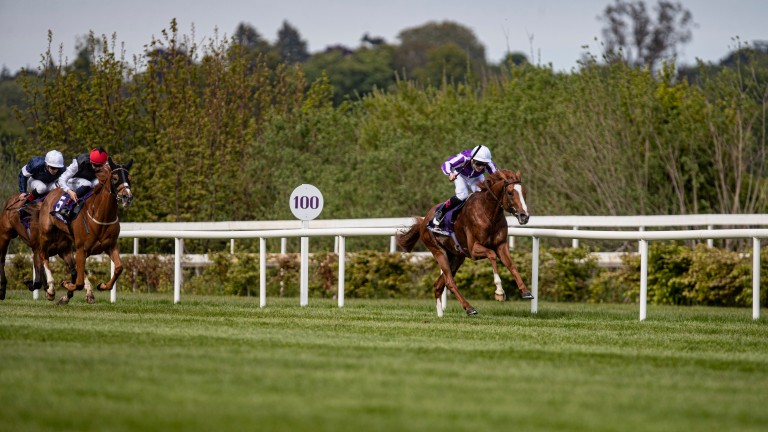 The best Gold Cup trial run in Ireland every year is the Saval Beg Stakes and Friday's running looked up-to-scratch with a dual Irish St Leger winner and a Melbourne Cup hero in the line-up but it was one of the youngsters of the group, Emperor Of The Sun, who stood out.

Trained by Donnacha O'Brien, Emperor Of The Sun hit the front rounding the home bend in the 1m6f Listed race, and he didn’t relent under Gavin Ryan to score by three and a half lengths.

Search For A Song ran on from out of the pack but was always held by Emperor Of The Sun who, in beating Dermot Weld’s star stayer, earned himself a general quote of 20-1 for the Ascot Gold Cup, a race the trainer’s father Aidan O’Brien has won a record seven times.

Confirming Ascot would be next for Emperor Of The Sun, Donnacha said: “It seems as though the further he goes the better he gets. He has one gear and he just grinds.”

"He keeps going so we could go to the Gold Cup now and he might be even better over that trip. They're good horses he beat there.

“Outside of Stradivarius, those horses are the ones who are up there in the betting for the Gold Cup. He seems to be improving and that was a real test of stamina there today.”

Mooney and Kane team up to take Ladies Handicap

The ladies took centre stage in the concluding Breast Cancer Ireland Lady Riders Handicap and trainer Amanda Mooney and apprentice Nikita Kane teamed up to take the race with No Say Ever.

The four-year-old, who has not always been the most straightforward, was sent to the front over three furlongs out by Kane and, the further the pair went, the more assured they looked.

Mooney said: "He's a lovely horse – he's hard work but he's worth it."

"I think he's one of the few No Nay Nevers that actually stays. Nikita rides him out a bit at home so she knows he can be slightly cracked and you just ignore it.

“Once he races he's very genuine. Fingers crossed he comes out alright and we'll pick another race for him."

FIRST PUBLISHED 6:56PM, MAY 14 2021
Outside of Stradivarius, those horses are the ones who are up there in the betting for the Gold Cup.

His place, his moment, his destiny - Stradivarius on the cusp of Ascot history Dettori adds to strong hand as he guns for third straight Royal Ascot crown Speak In Colours in 'really good shape' in bid for back-to-back Ballycorus wins