The end of an era as London greyhound blackout looms large 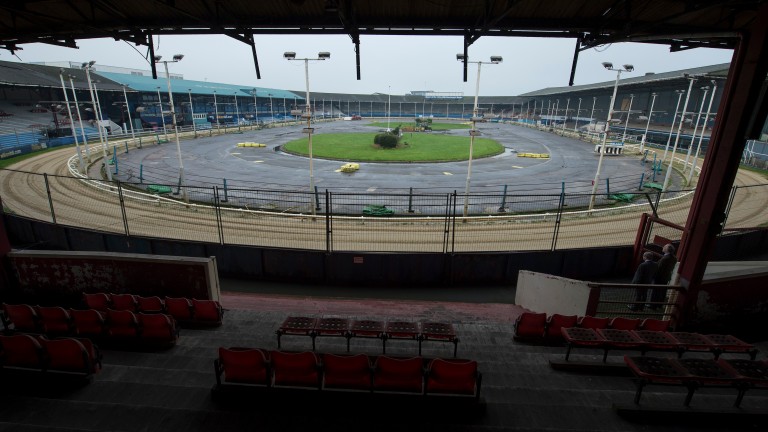 The curtain will fall on Wimbledon on Saturday night, the final chapter in a story that began on May 19, 1928, with the victory of a greyhound called Ballindura, trained by Harry Leader.

The closure of the famous Plough Lane stadium, built by WJ Cearns and which has thrived, and more recently merely survived, for almost 89 years signifies not only the end of an era in the history of the sport, but also the termination of greyhound racing as a sport in London itself.

Countless tracks once heaved with punters in the capital city, but each has boomed and bust – either victims of the decline of popularity of the sport as society and leisure habits moved on, or simply eliminated as the value of land made sales irresistible to track owners.

The fate of Wimbledon, which hosted greyhound racing’s Blue Riband event, the Greyhound Derby, from 1985 until 2016, was effectively sealed in 2005 when GRA Ltd was sold by Wembley PLC to venture capitalists Risk Capital Partners Ltd in a £50 million-plus deal.

It later emerged that the purchase was part-financed by property developer Galliard Homes, which has since sought and received permission by Merton Council to develop the site. Plans also include the part-financing of a new stadium for League One football club AFC Wimbledon, seen by many as a shrewd deal-sealer in winning over a pro-AFC authority despite many external concerns regarding the suitability of the site for development given its history of flooding. 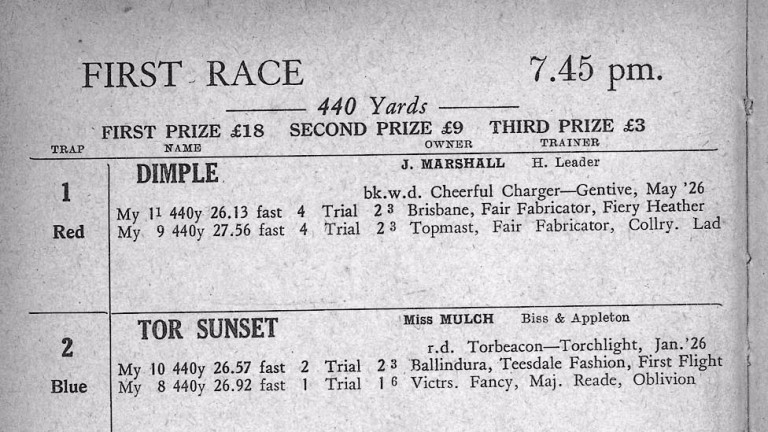 How it all started: the racecard from the first meeting at Wimbledon in 1928

In the years that followed the sale of the GRA, its group of tracks slowly began to evaporate. In 2009 Portsmouth was sold by Risk Capital to offset part of its debt; it closed the same year. Popular track Oxford closed on December 29, 2012, although a pro-greyhound council have steadfastly rejected any development of the site since.

While the future also looks uncertain for two other GRA tracks – Belle Vue survives on a short-term lease, while Hall Green faces its own battle with developers – it is the loss of Wimbledon, the track graced by the iconic Mick The Miller in all his pomp, which threatens to have the most lasting effect.

Can the sport survive without representation in London itself? Sadly we are about to find out.

For many, some of the venues listed will always remain tantalisingly out of reach. Listening to my dad – who buzzed around the London bookmaking scene from the 1960s until retirement a few years ago – talk of afternoons spent at the likes of Park Royal and New Cross, or fortunes won and lost at Wandsworth; I can’t help but feel envious.

I would have loved to have been able to walk among those lost terraces and witness the heaving throngs that packed out those subsequently demolished stadia.

But they have gone. For Wandsworth, think Arndale Shopping centre; for Hendon, Brent Cross. 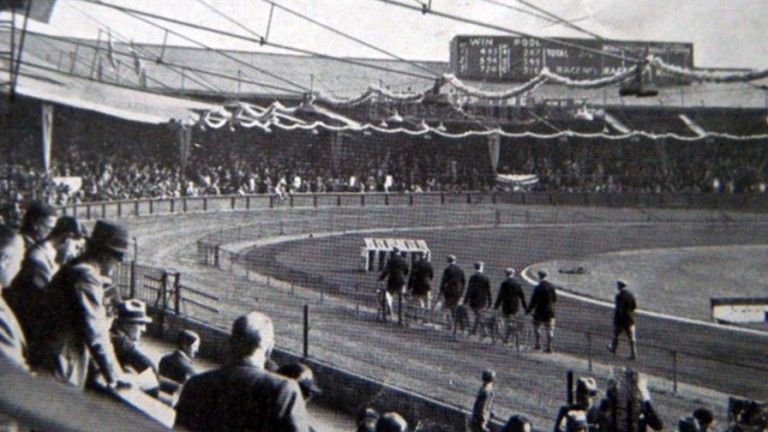 Racing at Wimbledon during the early days when the sport flourished

Researching an article in 2008, I read that one of the bends at Harringay – the third greyhound stadium to open in Britain after Belle Vue and White City in 1927 – can still be traced in the curving entrance of the Sainsbury’s built on the site of the old stadium.

Catford, another former GRA venue with its famous neon entrance sign, shut up shop in 2003 without any prior warning after an afternoon Bags meeting, and is now just another residential development.

Hackney – which became the victim of an ill-conceived multi-million pound rebuild, only to be declared bankrupt the very night it reopened its doors in October 2005 – made way for regeneration of a different kind as the 2012 Olympics breathed new life into the famous site.

But the days of the Guineas and the Lead, of eight-race Saturday morning cards and a cuppa and bacon roll from the old Hackney tea stand, will live on in memory only.

Wembley, a venue of greyhound legends for 71 years, and home to the Leger, Select Stakes and Produce among others, of course stands proudly redeveloped as our National stadium. But the lost bars, racing paddocks and old concourses that accommodated massive tote queues will never again be seen other than in photos.

The fact that 50,000 racegoers were rumoured to have attended the first meeting, on December 10, 1927, would probably be considered a ‘so what’ to a crowd of rowdy football fans.

The legend that during the World Cup of 1966, the stadium management refused to cancel a night’s racing, and the clash between Uruguay and France was switched to White City instead, would probably be laughed out of town.

But these things did happen, because back in the day, and for several decades of booming attendances, greyhound racing was a massively important part of London’s social scene.

The adulation that greeted our very first superstar, Mick The Miller, is almost impossible to comprehend in the modern era. A dual Derby winner, Mick actually crossed the line first in his third final in 1931, only for the stewards to declare a rerun after spotting an infringement.

Such was his fame that he appeared in a film, Wild Boy, in 1935. His photo adorned newspaper pages, his face was even embossed on ladies’ vanity mirrors. Forget Beckham, Rooney and the like, Wimbledon-based Mick, who graced White City, Wembley, West Ham and many more, was the original sporting icon.

Many of the tracks mentioned co-existed in those halcyon pre-war days when punters were not numbered in their thousands, but tens of thousands.

When the sport exploded on to the scene in the late 1920s, it soon became evident that, for the working-class urban punter, here was an opportunity to experience the excitement of racing and gambling, something they could ill-afford when it came to the horses.

The 1879 Metropolitan Racecourse Act had insisted that horse courses must be more than ten miles from central London. There were no such restrictions imposed on greyhound stadia, and the inner-London circuit was seized upon by a willing public.

It has been recorded that by December 1926, Belle Vue attracted 10,000 racegoers a night, Birmingham 9,000 and London’s premier track, White City, averaged an amazing 40,000 punters.

For many in the sport, the track will always remain the best there ever was. A massive 500-yard circumference, first-class facilities and the cream of canine action ensured an enormous following. From ragamuffins to royalty – the Prince of Wales and Prince George, later King George VI, were among the early visitors to grace the famous venue – they all went to White City.

The majority of these lost tracks flourished in an entirely different age. Pre betting shops, pre internet, pre just about everything the modern consumer takes for granted in the 21st century.

The industry has taken many knocks along the way, some of which played a massive part in the demise of the capital’s racing scene. Probably intrinsic was the 1960 Betting and Gaming Act. The legislation set up the conditions for alternatives to track betting, by allowing the opening of bingo halls, casinos and betting shops.

The double whammy of the Act though was not only in enabling punters to be able to bet without visiting the tracks themselves, but also in subjecting track promoters and the on-course totalisator to much higher tax rates than the off-course outlets.

Crowds began to decline significantly. In the immediate postwar years, attendances annually were still in the 25 million region. By the end of the 1960s, the number had more than halved to around ten million. Modern-day promoters would rub their hands with glee at such figures, but at the time, with so many tracks in existence, it signalled the beginning of the big cull.

In the eight-year period between 1966 and 1974 no fewer than eight of London’s tracks were consigned to the scrapheap. Wandsworth was first to go in 1966, followed by Stamford Bridge in 1968. Park Royal and New Cross went in 1969, with Charlton following in 1971.

It was a particularly sad year for greyhound racing in 1972 when West Ham, which had a capacity of 100,000 and gave birth to the Cesarewitch, was sold in May and demolished for housing. Hendon went just a month later.

The terrible period also saw the loss of Clapton in 1974. Considered by aficionados as one of the fastest tracks created – its almost circular shape, short straights of only 75 yards and wide, ranging bends, saw the track become renowned as the home of the sprint Classic, the Scurry Gold Cup, which almost rivalled the Derby in its popularity.

Built on the original home of Leyton Orient (Clapton Orient FC at the time), the track was London’s fourth venue, staging a debut meeting in April 1928. It was an immensely popular circuit and was the base of training legend Adam Jackson, who was attached to Clapton when sending out Patricias Hope to win the first of his Derbys in 1972. Where it once stood is now the Millfields housing estate, created in the early 1980s.

It was a further ten years, in 1984, when London lost its spiritual greyhound home White City. The GRA, which had embarked on a policy in the 1950s of buying up tracks to raise the value of its stock, actually renamed itself GRA Property Trust in the summer of 1969.

It continued to invest, with Wimbledon in 1972 becoming the last purchase of the period. But a slump in the property market and land values began to pinch. From 1975 it was sell-to-survive time, and the writing was firmly on the wall for many tracks.

The company moved on the likes of Slough, Shawfield, Harringay and Powderhall, but it was the sale of White City, to become the home of the BBC in 1984, that stunned the sport.

The home of the Derby and a stadium steeped in history, where stars graced both track and terraces alike, was removed from greyhound racing’s landscape.

The loss of White City, which was felt so keenly at the time and is still painful for so many, had parallels with the demise of Walthamstow, sold by the owning Chandler family. Both sat at the forefront of the industry and were media-friendly and considered iconic.

Now, we prepare to say goodbye to Wimbledon, the last of our capital’s tracks. The once thriving South London circuit offered excitement and a touch of class in its heyday.

The Derby years brought us thrills, champions and surprises too. We applauded as the sublime Rapid Ranger and the mighty Westmead Hawk entered the history books as rare dual winners of the toughest event of all.

We watched on spellbound as Derby King Charlie Lister set a new record with a magnificent seven Classic crowns, while even the hardest of hearts was touched when former Romford grader Salad Dodger took his then unknown trainer Bruno Berwick on a Plough Lane rollercoaster ride to victory in 2014.

Fantastic memories all. But when the hare is set in motion and the dogs run for the final time on Saturday night in a certain corner of SW17, sadly, memories is all London will have left.