Trainers' views and punting pearls for the Bunbury Cup 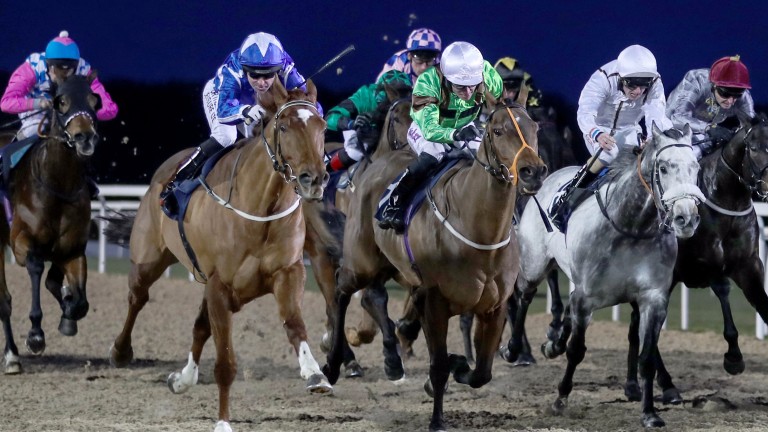 Flaming Spear and Robert Winston (left, blue with white star on cap) sprint from last to first to land an improbable victory at Newcastle in January
John Grossick
1 of 1
By Graham Dench 6:15PM, JUL 14 2017

1. This race frequently goes to a 7f specialist, and ante-post favourite Tashweeq fits the bill. Both his wins have been over 7f, and he appeared to find the mile of the Royal Hunt Cup just too taxing when an honourable third to Zhui Feng.

2. Flaming Spear tackled Group 1 company as a juvenile when down the field in Longchamp’s Poule d’Essai des Poulains. Two all-weather wins over the winter at Newcastle suggest Kevin Ryan has got him right again and, if that proves to be the case, a mark of 101 should not be beyond him.

3. Robero has thrived since joining Mick Easterby, and won much more easily than the official margin suggests at Pontefract on Tuesday. He boasts the speed for 6f, yet stays a stiff 7f well, and simply couldn’t be in better form.

Richard Hannon, trainer of Tabarrak and Tony Curtis
Tabarrak ran a very good race at Ascot and could go close in a race like this. He's a tough horse who tries hard and never lets you down. Tony Curtis made a pleasing comeback at Goodwood, where he needed the race badly. He could go well too.

John Gosden, trainer of Tashweeq
He ran a great race in the Hunt Cup and this is the equivalent at the July festival, so it looks the right race. He's back a furlong but has won over course and distance and won't mind the ground.

Saeed Bin Suroor, trainer of Steady Pace
He ran a big race when finishing second at Royal Ascot and I think the return to seven furlongs will suit him. He's in good form and Josephine Gordon knows him well.

Simon Crisford, trainer of Mutawathea
He ran well in the race last year and is fresh and well, so we're hoping for another big run. He's drawn in the middle so can go either way and he likes fast ground.

Robert Eddery, trainer of Donncha
The last twice he's pulled a front shoe off and come home sore, but we've filled the hoof and got a shoe back on and he's working very well. He's due a change of luck.

Rebecca Menzies, trainer of Von Blucher
He's got form on similar ground at Newmarket and we're hoping that dropping back a furlong will suit him.

Richard Fahey, trainer of Withernsea
He's a regular in these big handicaps but ideally wants a bit more juice in the ground, so any rain would be welcome.

David Easterby, assistant to Mick Easterby, trainer of Robero and Holiday Magic
Good ground is what we want for Robero. The nearer it is to good the better. He’s in good order and we’ve been very pleased with his attitude. We’re pleased with Holiday Magic too. He’s had a bit of a break, which he appreciated, and also wants good ground.

Gary Moore, trainer of Gossiping
He had a very busy time in the spring but has had a good break. I'd have liked a bit more rain, and I'm not sure Newmarket is his track, but he's grown up a lot and never ceases amazing me.

FIRST PUBLISHED 6:00PM, JUL 14 2017
Good ground is what we want for Robero. The nearer it is to good the better. He’s in good order. We’re pleased with Holiday Magic too