The B brings her A-game to complete McParlan double 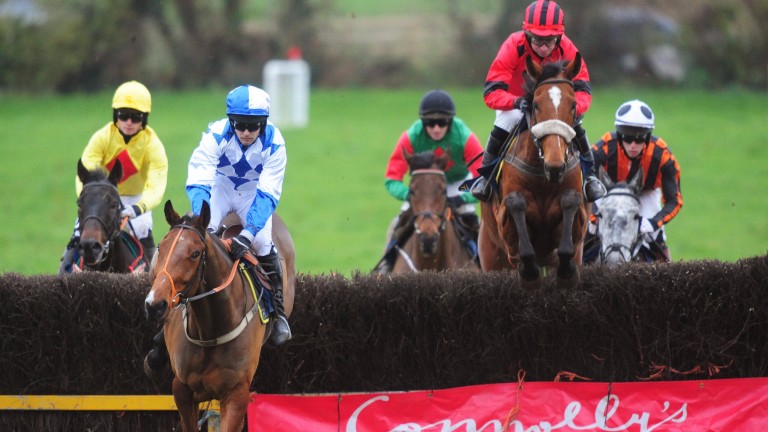 The B caused quite a buzz at the Westmeath & Longford meeting when she helped Noel McParlan complete a double.

The Billy Lanigan-trained mare had previously shown snippets of form and was unlucky at Grennan a week earlier when being carried out by a loose horse on the final circuit while still travelling well.

But on Sunday he beat off Swift by three-quarters of a length to land the Irish Netting Systems & Reilly Structural Steel Ltd five-year-old and upwards mares’ maiden.

An ecstatic winning owner Marye Blundell said: “I can’t believe she won the way she did. She would have hated that ground but she jumped brilliantly. I’m delighted.

“She is a gorgeous-looking mare and at one point I was considering sending her to Dublin for a show.”

Lanigan added: “I’m thrilled for Marye and it was great to see her colours carried to victory. Noel gave her a brilliant ride – he is very good.”

McParlan had opened his account when teaming up with Waterford handler Robert Widger to take the Currygrane Fishing Lodge five and six-year-old geldings’ maiden with debutant Themagicofmelleray.

But he was gifted the contest when the locally-trained Smooth Spoon crashed out at the final fence while holding an advantage, leaving the path clear for the Gerry Keane-owned gelding to prevail by four lengths from Captain CJ.

A relieved Widger said: ‘We only have four in at present and that’s our second winner of the season.

“I am delighted for my owner Gerry, as it was great to see him get a winner. We will probably go to the sales next.”

Just Don’t Ask impressed in the opening Connolly’s Red Mills four-year-old maiden when registering an easy victory in the hands of Anthony Fox.

The son of Ask had previously run well at Inch before coming to grief – a race which has subsequently produced four maiden winners.

The gelding is owned and trained by Virginia Considine, and her husband Dermot said: “We bought him at the Tattersalls Derby Sale last year. We have always liked him and we thought he was unlucky at Inch last season.

“Anthony was delighted with him and we have two more to run this season, so hopefully it’s a sign of things to come. Just Don’t Ask will now go to the sales.”

Shauna Larkin, the only lady rider to have ridden a winner this season, doubled her tally when winning the Quinns Supply Stores Ltd winners-of-three aboard Rosc Catha.

Only two went to post, but it was the Eoin Larkin-trained gelding who was always in command, as he pulled clear of the Ciaran Murphy-trained mare Lucy Kate four fences from home and kept on strongly to record a 20-length victory.

Winning owner Michael Larkin said: “He absolutely loved it out there, though he probably would have preferred some company and something to go on a bit as he needs a good gallop.

“Shauna gave him another brilliant ride and I would love to see her as champion lady rider as it has always been an ambition of hers. Rosc Catha will now go for the open at Borris House next month.”

The David Christie-trained Maple Mons was back to her best when landing the three-runner Rawles Bar & Lounge mares’ open lightweight despite misbehaving beforehand.

The daughter of Great Exhibition gave spectators a fright when knocking down her handler in the parade ring and bolting to the start.

But the champion mare was still able to jump out and make all in the hands of Declan Lavery to defeat last month’s Rathcannon victor Abigail Lynch by a convincing six lengths.

Carrigeen Acebo was 12 lengths further back in third.

Christie said: “She got loose at Rathcannon and I’m not sure what happened but she wasn’t her true self and it’s only this week we seem to have her back.

“She might go for the Wexford Hunters’ Chase next but whatever she does this season it will be her last before we put her in foal.”

The concluding Haley McCoppin six-year-old and upwards maiden only saw one finisher return in the testing conditions.

The Norman Geragthy-trained Thornfield set a strong pace from the front under Fergal Hartford which proved too much for the runners in behind who all pulled up.

It was a real family success as the gelding is owned and trained by Geraghty and was bred by his sister-in-law Ashling McDonogh.

Geraghty said: “We always knew he had ability and he showed that today. Fergal gave him a lovely ride and got him settled nicely.

“If he comes out of his race well, he will go to Tattersalls on Sunday for the winner-of-one.”

Just Don’t Ask was in a league of his own as he won this slowly run small field contest with some amount in hand. He appears to possess plenty of speed and is one to note in a Bumper this season