Temperamental Bella back doing what she does best at favoured venue 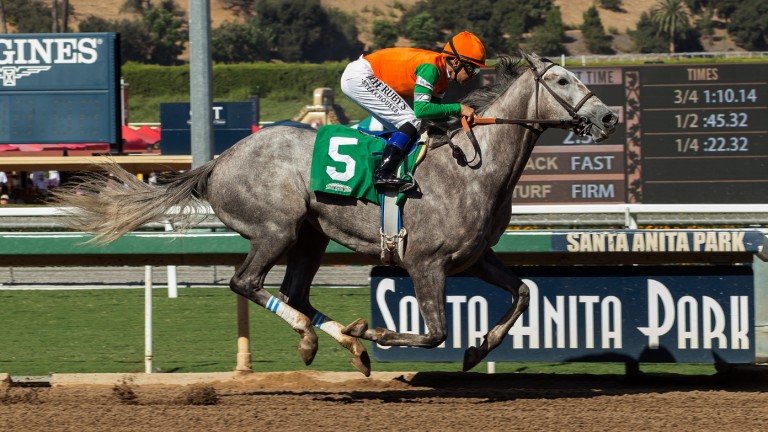 Unique Bella: four-year-old's owners were present to watch her score
Benoit Photo
1 of 1
By James Burn UPDATED 9:32AM, JUN 3 2018

Prolific filly Unique Bella (Jerry Hollendorfer/Mike Smith) was back doing what she does just best - winning at Santa Anita - when she came clear to land the feature Grade 1 named in honour of the three-time Breeders' Cup heroine who was also mustard at the California circuit and won the race in a different guise two years ago.

A disappointing second in the Grade 1 Apple Blossom Handicap at Oaklawn Park in April, Unique Bella was making it seven victories from eight starts at Santa Anita when she overtook Paradise Woods just before the turn for home in the race formerly known as the Vanity.

From there, she was able to record a two-and-a-quarter length verdict from La Force, who ran on late.

Unique Bella is owned by Don Alberto Stable, which has had horses in Britain, including Frankel's first winner in the John Gosden-trained Cunco, who struck at Newbury in 2016.

Watch Cunco win at Newbury in May 2016

Fernando Diaz, representing the owners, said: "First and foremost I have to say that the owners came in from Chile this morning and were able to see her for the first time run here in the Beholder and to see their own filly win, and so aggressively, was exciting for them, so I'm very excited as well.

"They wish there were more Grade 1s here at Santa Anita because she loves it here and going two turns here was worth it.

"We're so pleased with Jerry and his team for doing an exceptional job with this mare."

Undoubtedly talented, the daughter of Tapit comes with a few quirks, as Smith, who will bid for Triple Crown immortality on Justify in Saturday's Belmont Stakes, explained.

Don Alberto owners busy on the back of Midway success

Cunco leaves Gosden to continue career with Brown in US

FIRST PUBLISHED 7:12AM, JUN 3 2018
She's very temperamental and you've really got to get along with her