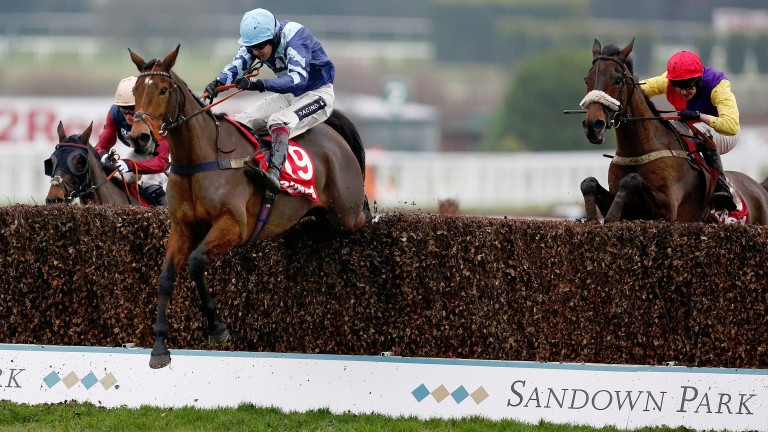 Pete The Feat (left) takes the last before fending off Theatrical Star in a Sandown thriller
Alan Crowhurst
1 of 1
By Stuart Riley 5:48PM, JAN 7 2017

Teenager Pete The Feat recorded the tenth and biggest win of his 56-race career in the 32Red Veterans' Handicap Chase at Sandown on Saturday, tenaciously galloping all the way to the line under Aidan Coleman to secure the much-coveted £61,900 first-place prize-money.

The series for veterans is in just its second year but has proved popular and 16 old favourites went to post for a race in which the winner's stablemate Loose Chips, who held on to finish third, set a proper gallop.

The strong pace and stiff jumping test that Sandown provides slowly whittled down the field. Just seven were in with a chance turning for home for the final time and, as Coleman kicked on approaching the Pond Fence, it was only Colin Tizzard's Theatrical Star who looked a danger.

Given the season Tizzard has had – he added his first Grade 1 of 2017 earlier on the card to the seven he landed in 2016 – there was a feeling of inevitability to Theatrical Star's challenge. He loomed up under Brendan Powell, bedecked in Brocade Racing's purple, red and yellow silks made famous this season by Hennessy and Welsh National winner Native River, but try as he might Pete The Feat was not for passing.

Charlie Longsdon's brave battler – at 13 the oldest horse in the race along with Aachen – last crossed the line in front in December 2013, some 13 starts ago. He has dropped 19lb during that time and off a featherweight of 10st 1lb found enough to repel Theatrical Star's late challenge and give his trainer just his second winner since the start of December.

"Aidan has given him a fantastic ride and it was great to see old Pete The Feat win," said Longsdon, who was caught on camera giving every ounce of encouragement he could muster as his charge galloped up the hill.

"I thought he was a 16-1 chance, not a 33-1 shot, and Loose Chips an 8-1 shot, not a 16-1 shot. We haven't had a winner since the middle of December. If we were in form they would probably have been half the price. The horses have been running well, just not winning."

Longsdon also revealed another veteran was in part responsible for Pete The Feat's win. "He's still full of enthusiasm so why retire him when he has the enthusiasm he's got. He likes to push around and Wilf Rayer, who is in his early 70s and rides him every day, lets him get away with murder and that keeps him as sweet as he is."