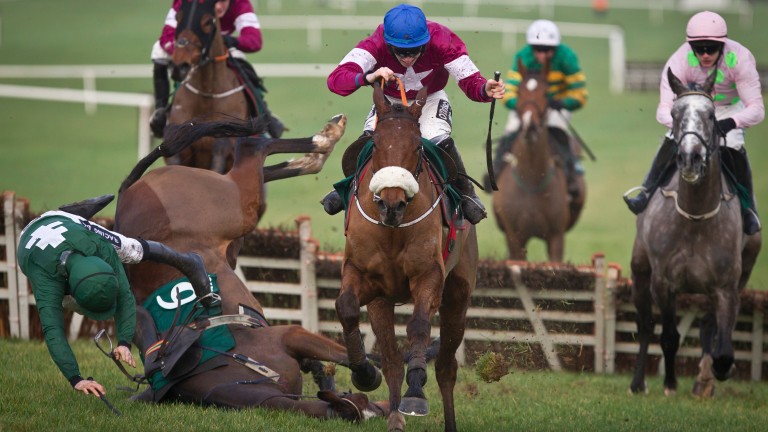 Teenage sensation Jack Kennedy believes the stamina-sapping test of the Albert Bartlett would suit Death Duty at the Cheltenham Festival.

Kennedy again proved himself the most able of deputies for the injured Bryan Cooper when steering Death Duty to a nine-length success in the Lawlor's Hotel Novice Hurdle at Naas on Sunday – his second Grade 1 success in a fortnight following Outlander's Lexus win – and he firmly believes the Albert Bartlett is the right festival race.

"He'd gallop all day long," said Kennedy. "We went very steady early at Naas, which didn't really suit me, and he went to sleep on me. He probably relaxed too much. He was only getting into top gear coming down to the last. He's not slow at all, but his stamina and ability to keep galloping is what makes him the horse he is.

"The Albert Bartlett can turn into a real test and that would suit Death Duty. He won't be stopping, that's for sure. He'll keep going and gallop all the way to the line.

"He's some jumper too, very slick over his hurdles, and he jumped great on Sunday. That's a huge asset to have."

So with two Grade 1 wins in the bag in the space of 11 days, which one did Kennedy get the biggest kick out of?

"Oh definitely the Lexus," the 17-year-old replied. "That was a big surprise. When you don't expect something to happen, and then it does, it's a great feeling. Death Duty was expected to win so it was no real surprise."

Kennedy could have a big couple of weeks coming up as Cooper recovers from a fractured pelvis, and the biggest present of all could be partnering Don Cossack for the first time in public in the Red Mills Chase at Gowran Park on February 18.

"It would be a dream come true to ride Don Cossack," said Kennedy. "He's a Gold Cup winner and a horse of a lifetime. I've sat on him once at home and he gave me a lovely feel.

Kennedy has not set specific goals for the season, his ambitious bid to be champion jockey being dashed earlier in the season, when he broke his leg while holding a decent lead at the top.

"I just want to keep improving, I've no goals," he said. "I want to ride as many winners as I can and the main thing is to stay injury-free. I'm delighted with how things are going."