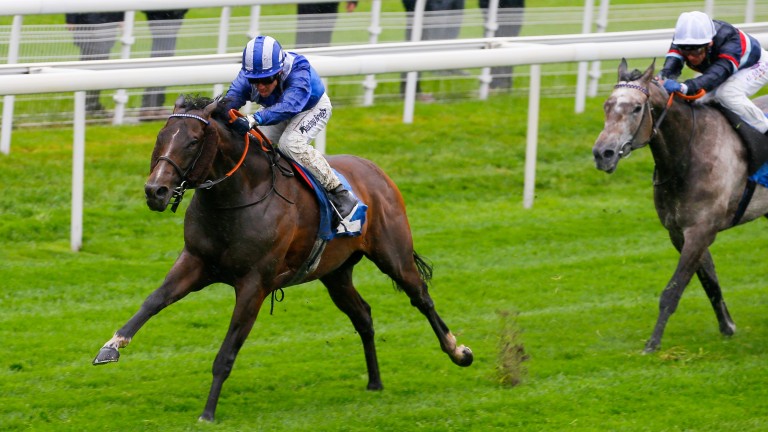 On a day that featured a major Oaks trial, the real revelation came in the Duke of York Clipper Logistics Stakes, in which Tasleet planted a flag for the season's major sprint prizes with a decisive success over last year's winner Magical Memory.

Last year's Greenham winner was making his first start over six furlongs since his two-year-old days, but showed ample speed in the worsening conditions and still had his surplus stamina to call on at the finish as he streaked away to win by two and a half lengths.

Trainer William Haggas was a little surprised after the 14-1 shot came in, but not in the manner that might have been expected.

"I always fancied dropping him back to six furlongs, but he had a hind ankle injury last year that kept him out until the autumn," said Haggas. "It was the ground I was worried about. I’ve always thought he was a fast-ground horse but I've only had him three years so I have an excuse!

"I spoke to [racing manager] Angus Gold this morning and just said we needed to give him races. He only had two last year and we needed to move him on."

There is now a temptation to cast Tasleet as potentially a slow-motion version of owner Hamdan Al Maktoum's Muhaarar, who also won the Greenham before ultimately becoming champion sprinter. He won the Commonwealth Cup at Royal Ascot, but Tasleet is now bound for the older-horse version, the Diamond Jubilee Stakes. He was cut to 14-1 by several firms for that race immediately after this victory and is now a top-priced 16s with Sky Bet and Coral.

"That will be the plan," confirmed Haggas. "It's Group 1s all the way with him now. I might be worried about Charlie Hills's horse [Magical Memory] because he’s run a fine race on unsuitable ground."

It was almost as if Hills had heard Haggas's comments from the other side of the winner's enclosure. "I'm delighted with him," said Hills of Magical Mystery, now roughly similar in price to Tasleet for the Diamond Jubilee. "We were thinking of taking him out but we really wanted to get a race into him for Ascot, which is the main target.

"He got a bit tired as race fitness and the ground caught him out, but he travelled great. It's all systems go for the royal meeting. He had a bit of a setback and that's why you haven't seen him for so long. He can only improve for that."

Two heavyweight prize-fighters could not have set up the rematch any better.