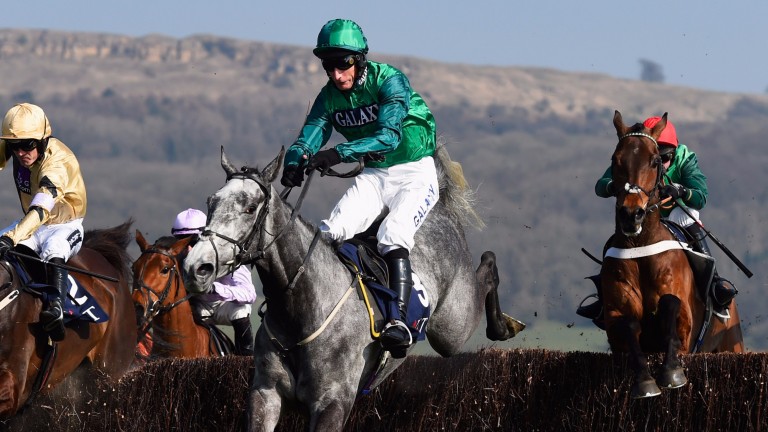 Bristol De Mai: brings a classy overall profile into the At The Races Rehearsal Chase
Mike Hewitt
1 of 1
By Richard Birch 6:00PM, NOV 25 2016

Five-year-old Bristol De Mai, who finished runner-up to Black Hercules in the Grade 1 JLT Novices’ Chase at Cheltenham in March, remains a horse with plenty of potential and rates a fascinating contender for this prestigious event, which was moved to Newcastle from Chepstow in 2005.

His trainer Nigel Twiston-Davies, who has already sent out more than 50 winners this campaign, could not be in better form.

Last year’s winner Wakanda, one of two Sue Smith runners, is now 7lb higher in the weights but looks another who might not yet be fully exposed at the age of seven.

Southern-based stables have plundered this valuable prize six of the last eight runnings with only Wakanda (2015, Sue Smith) and Harmony Brig (2007, Nicky Richards) being the exceptions.

Step up in trip will suit Red

Definitly Red stayed on strongly to win over two and a half miles at Carlisle on his seasonal reappearance last month, and the seven-year-old, who contested the 4m National Hunt Chase at Cheltenham in March, will appreciate the step back up in trip.

Paul Nicholls, trainer of Virak
He was second in this last year and filled the same berth on a few other occasions too, but he always ran really well. He's tough, genuine and always gives his all, which is why he gets higher and higher in the handicap. He's not far off the mark that he was second off at Aintree though, and his run the other day behind good horses was good. He should run tidy.

Kerry Lee, trainer of Bishops Road
I just wish the ground was even softer. I'm very happy to have got Paul Townend, and the horse is in good order. It'll be very interesting to see how he performs. Hopefully we'll find out if he's still feasibly handicapped or not – he's failed to complete the course in two starts since rising sharply in the weights for his Grand National trial win at Haydock in February.

Nigel Twiston-Davies, trainer of Bristol De Mai
He disappointed at Carlisle the other day but he'll like the trip and the ground. I'm expecting a good run.

Sue Smith, trainer of Wakanda and No Planning
Wakanda won it last year. He's gone up a good bit in the weights since then but seems in good form. His last run will have brought him on and he does like Newcastle. It's not been easy to find suitable races for No Planning. He has been working well at home and has no weight on his back. We've got Jack Kennedy taking off an extra 3lb, which is a bonus.

David Pipe, trainer of Katkeau
The softer the better for him. He is weighted pretty high but David Noonan takes off 3lb and he's in great form at home.

Jessica Bell, assistant to Brian Ellison, trainer of Definitly Red
We're really happy with him and are hoping for a big run.

FIRST PUBLISHED 6:00PM, NOV 25 2016
He disappointed up at Carlisle the other day, but will like the trip and the ground. I am expecting a good run