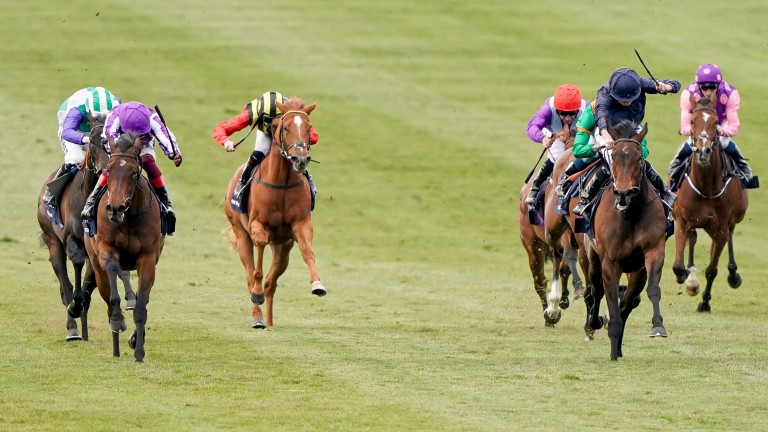 Until the early months of this year, Santa Barbara was a once-raced maiden winner languishing down the markets for the 1,000 Guineas and Oaks behind apparently better-fancied stablemates.

However, her prices tumbled through the spring off the back of strong reports on her wellbeing and talent from her master trainer Aidan O’Brien, meaning that for the second time in as many Classics she will be the favourite to take the race.

The fact she lined up as the joint-market leader at Newmarket on just her second start with stable jockey Ryan Moore aboard was remarkable in itself with O’Brien, among others, fielding rivals who brought Group 1 form to the table.

As O’Brien had foreseen, the daughter of Camelot showed signs of greenness and inexperience – particularly around the Dip on the Rowley Mile – when finishing fourth to Mother Earth, who was partnered by Frankie Dettori.

Santa Barbara is again number one choice for O’Brien and Moore, who has sided with the latent talent of his filly over the reliability of stablemate Snowfall, whom he guided to victory in the Musidora with a masterful front-running ride.

With Moore pinning his colours firmly to Santa Barbara, Dettori again fills in as second rider on a contender who brings solid Group 1 form into the race. 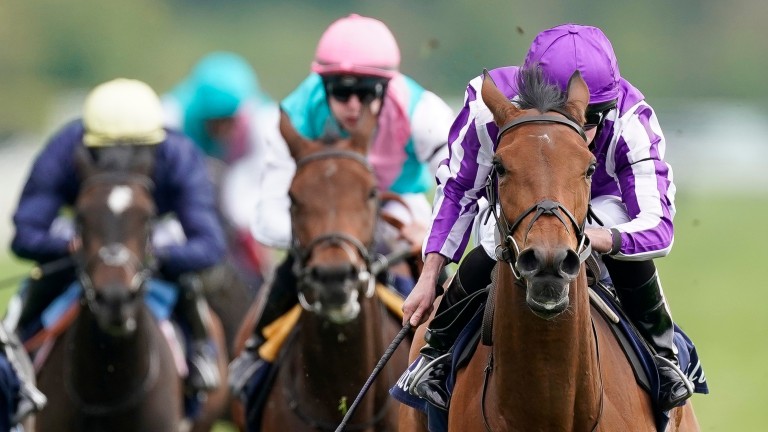 "Santa Barbara is very well," O’Brien said. "She's come out of Newmarket like we hoped she would and everything has gone well since with her.

"We trained her for Newmarket like it was her first run of the season, we had to be careful, but this time we got to train her for a Classic. Obviously she's only had the two runs but she is intelligent and for a filly only having her second run she did very well, we thought.

"We always thought the world of Snowfall. At York, it was the first time she showed on the track what she had been showing us at home."

O’Brien has adopted his more traditional approach to the Oaks with multiple runners – compared to his single dart at the Cazoo Derby with Bolshoi Ballet – and Divinely has quietly attracted money with the bookmakers in the week leading up to the Oaks. Willow and La Joconde complete the Ballydoyle squad.

"Found's sister, Divinely, had a lovely run at Lingfield that was probably better than it looked," O’Brien said. "Ryan was over the moon with her. They went slow and it didn't suit, since then her work and numbers have been very good.

"We always thought La Joconde was better than she ever ran. She hasn't won yet but always worked better than just a maiden."

'She has flashed brilliance' - Varian hoping Teona can shine on track

When it comes to money in the bank, the Cazoo Oaks will fall quite a way short of being the biggest race jockey David Egan has ever won, but he has already expressed his excitement at the “special” experience of being involved with a leading Classic contender.

In the space of a little over a month earlier this year, Egan landed the world’s richest race, the Saudi Cup, and the Sheema Classic on Mishriff, pocketing in the region of £665,000 for his share from the £9.5m winnings picked up by the four-year-old.

By contrast, he would take home just under £16,000 for steering home Teona to success at Epsom.

Yet Classic victories mean more than numbers to those connected and in Teona, Egan has a leading chance of securing a first Classic win and his second Group 1 following Mishriff’s win in Dubai in March. 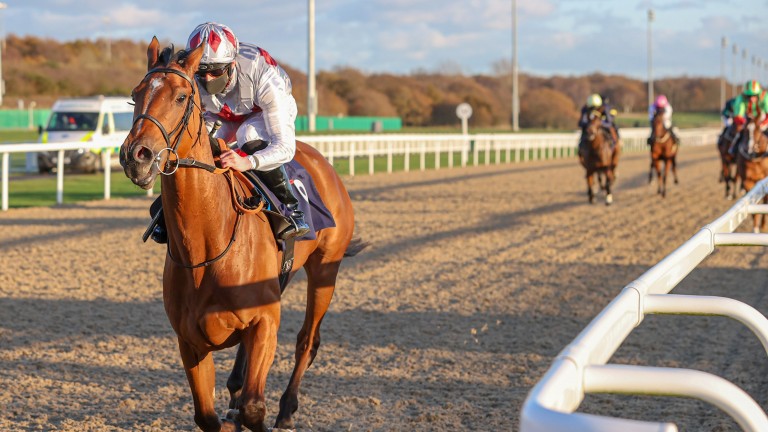 Teona: needs to show her class on the track following her defeat in the Musidora
John Grossick (racingpost.com/photos)

Owned by Ali Saeed, Teona is by a Derby winner in Sea The Stars and out of a Group 1-winning mare who is by another Derby winner in Authorized, so possesses breeding potential for victory in the Oaks.

She will sport a first-time hood after getting restless in the stalls before racing too keenly when beaten in the Musidora Stakes last month and impressed in her final workout in Newmarket this week.

Her trainer Roger Varian said: "It’s fair to say Teona has flashed brilliance without yet showing the true extent of her ability.

"She was a wide-margin winner of her second start at Newcastle and her failure to settle early in the Musidora has been widely dissected. She’s going to need to be more tractable in the early stages if she's to produce what she has suggested she is capable of at home."

Teona is one of three Oaks runners for Varian alongside Save A Forest, second to Sherbet Lemon in the Lingfield Oaks Trial last time but among the outsiders, and Zeyaadah, an unlucky second in the Cheshire Oaks after meeting trouble in the race.

"Zeyaadah’s arguably unfortunate not to be heading to the Oaks unbeaten having encountered traffic problems at Chester," Varian added. 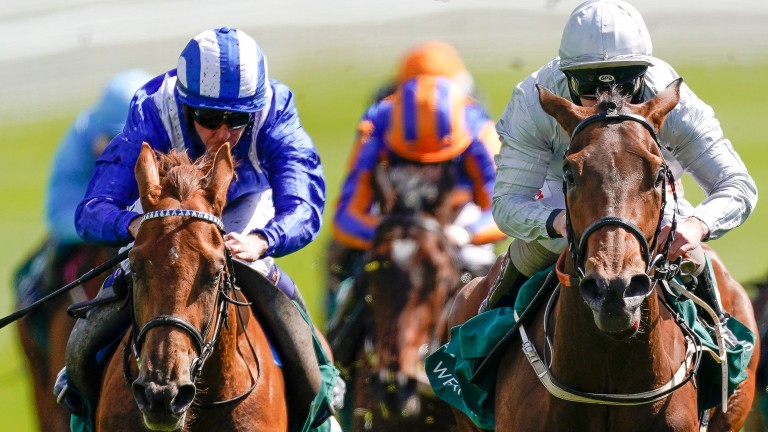 "She was unable to gather in Dubai Fountain that day having conceded first run, but Jim Crowley was very complimentary about her afterwards. She is a very uncomplicated filly who will handle whatever ground as well as the big occasion.

"She showed a tremendous attitude to win her Listed race as a two-year-old on genuine heavy ground and heads to Epsom as a very solid contender.

"Save A Forest has already proven herself a progressive and straightforward filly who is not short on natural talent. She’s a lively outsider."

For much of the Cazoo Oaks trainer Jane Chapple-Hyam and jockey Adam Kirby are likely to be very content with their star filly, it is just the final stages that are requiring them to take a leap of faith.

The owners may be unsure whether 1m4f around Epsom is possible for Saffron Beach, with much of her pedigree biased towards speed, but Chapple-Hyam is approaching the race with as much confidence as she can without being certain.

"She's in very good order and I can't fault her. Adam can't fault her and Abi, who rides her at home, is the same," she said. "If these people are giving me the confidence in the filly and in her ability to stay then you have to go to the race optimistic.

"We're 100 per cent sure she'll get a mile and a quarter but it's about the final two furlongs, we'll have to just see. I'm old school in that if your horse finishes placed in a Guineas then you head to Epsom for the Oaks or Derby." 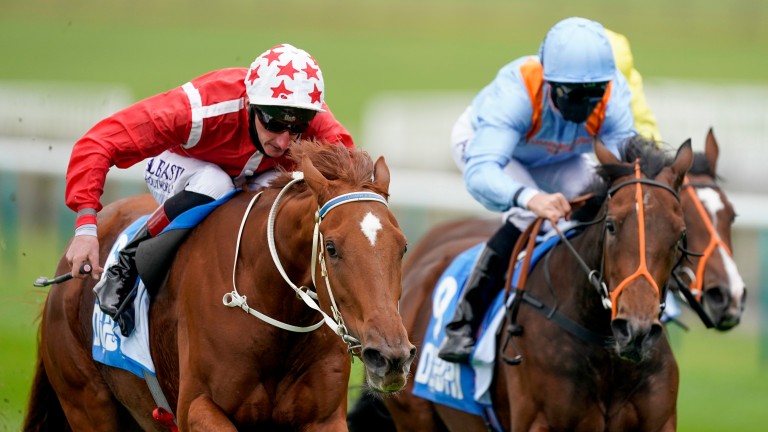 Saffron Beach has already shown she possess the class to win an Oaks after finishing runner-up to Mother Earth in the 1,000 Guineas, while she moved smoothly around the contours of Epsom under Kirby during a behind-closed-doors gallop last month.

She will sport a red hood to the start on Friday to help keep her as calm as possible, after which Chapple-Hyam expects her to once again put her best foot forward.

"It's a team effort to get horses like her to these races and we really hope she can do it," she added. "I'm sure she'll run to the line and her gutsiness gets her to the line as strong as she can. Whatever she does we're incredibly proud of her already."

George Boughey, trainer of Mystery Angel
She deserves her place, she showed a liking for faster ground and seems to be in great form at home. I would consider her a lively outsider.

Hugo Palmer, trainer of Ocean Road
She’s an outsider, but I think she’s a lively outsider. She has a lot of improvement to find, but I think that it’s a pretty open year. I’m pretty sure she will stay.

Robert Thornton, manager of Apple Tree Stud, owners of Sherbet Lemon
It’s fantastic to be running and is what we set out to do when we set this up. We’re all really looking forward to it and she could finish fifth or sixth and run a great race. I think there’s a great deal of improvement still in her and she has an each-way chance.

Martyn Meade, trainer of Technique
She really enjoyed the track when she ran there and that helps. Clearly the last run was a bit disappointing but she was a bit under the weather then. She's bounced back now and looks to be in great form.

FIRST PUBLISHED 6:00PM, JUN 3 2021
We trained her for Newmarket like it was her first run of the season, we had to be careful, but this time we got to train her for a Classic