Queens of the Turf ZENYATTA 17 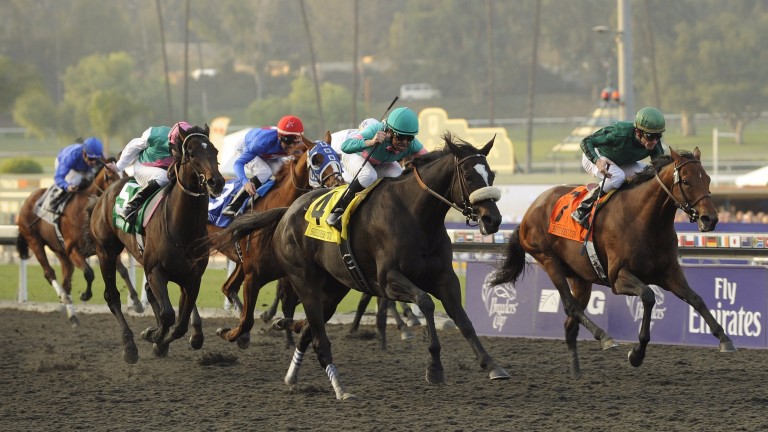 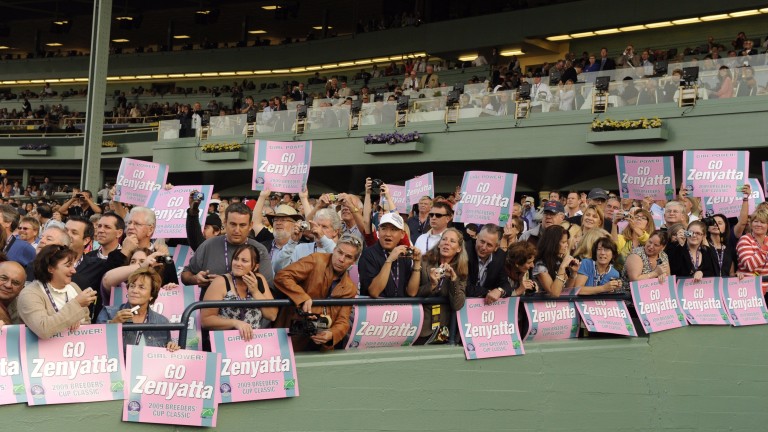 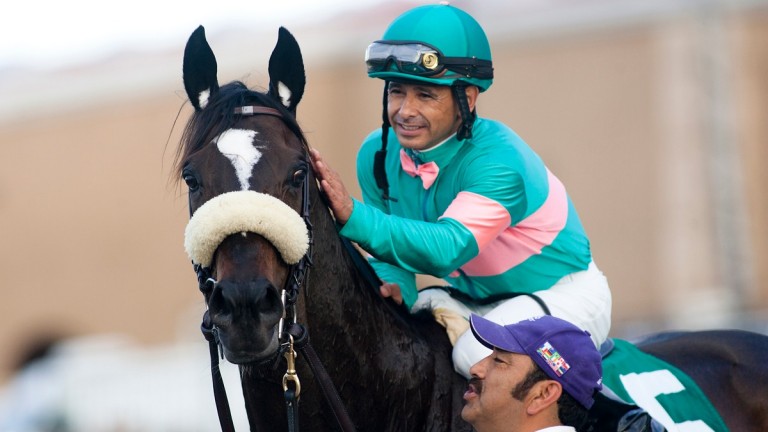 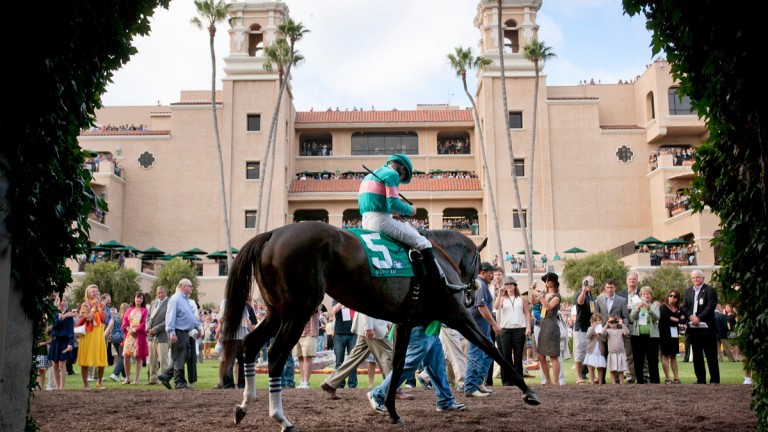 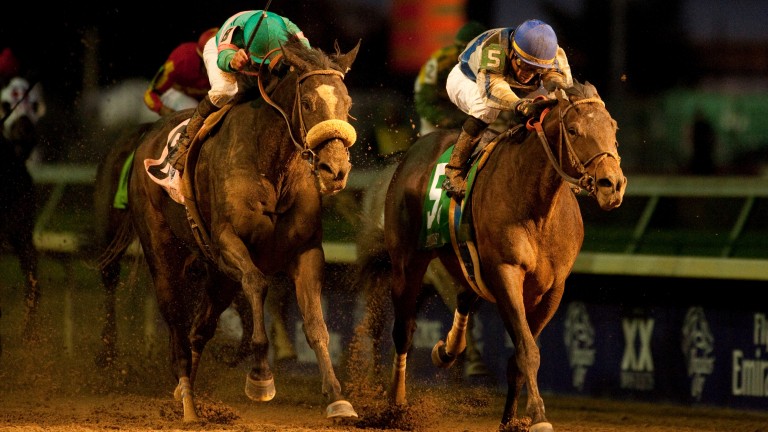 She swoops to conquer: Zenyatta (noseband) overwhelms a field of top-class males in the Breeders' Cup Classic at Santa Anita in 2009
Edward Whitaker
1 of 5
6:15PM, JAN 17 2017

Foaled April 1, 2004
Pedigree Street Cry - Vertigineux
Owner Jerry & Ann Moss
Trainer John Shirreffs
Main jockey Mike Smith
Breeder Maverick Production Limited
Career record 19 wins from 20 starts
Most famous for One of the most popular horses in US racing history, renowned for her customary late charge from seemingly impossible positions; won her first 19 races before agonising head defeat on final start in Breeders' Cup Classic
Fate at stud Retired to Lane's End in Kentucky, where she has produced foals by Bernardini and Tapit (named Cozmic One and Ziconic; neither has shown much) before twice being bred to War Front; both foals died (one after a paddock accident, the second after just two days owing to complications). She was bred to Medaglia D'Oro in 2016.

When all is said and done, it was only a head. But for that agonising margin, the distance by which the great Zenyatta – the wonderful, incomparable, scarcely believable Zenyatta – failed to nail the aptly named Blame on her final start, then the sweet-natured she-hulk with the puppy-dog temperament would have ended her career with a totally unblemished record.

In the event, she forfeited her unbeaten status on her 20th start as the Breeders' Cup Classic of 2010 produced a fittingly dramatic conclusion to an unforgettable racing life under the floodlights at Churchill Downs. Then again, she had already won a place among racing's immortals, long since transcending the sport in which she established a modern-day North American record with her 19-race winning streak in unrestricted races, among them 13 Grade 1s.

Her every move followed by a legion of ardently devoted fans, Zenyatta was charisma made bulging equine flesh, blessed with an irresistible talent yet soft as a kitten at the same time. Bought for $60,000 as a yearling at the Keeneland September Sale in 2005, she was named after The Police's third LP, Zenyatta Mondatta; her owner Jerry Moss had signed the faux-reggae titans to his record label A&M.

Sent to her owner's farm in Florida, she was such a gross horse that she did not race until the autumn of her three-year-old career. "She covered the ground and came with rave reviews," recalled trainer John Shirreffs. "But then you didn't know if she just had a big stride or if she had any speed to go with it. We just had to wait for her to put it all together."

Once she did, though, she was something to behold, winning a string of top races, more often than not in utterly thrilling come-from-behind fashion. Zenyatta's version of the Late Late Show became one of the hottest tickets in the racing world; she was featured on the TV show 60 Minutes; she was profiled in Oprah Winfrey's magazine. She was a drama queen at heart – witness the prancing and dancing in the parade ring before her races that became one of many Zenyatta trademarks – and loved all the attention she habitually received.

Yet there were also non-believers who considered her a plastic-track princess as she rarely left her home state during an era when synthetic surfaces prevailed in California. For such detractors, humble pie was on the menu when she recorded her 14th straight victory in a stunning display on the Pro-Ride in the 2009 Breeders' Cup Classic at Santa Anita, where she had won the Ladies' Classic (now Distaff) the year before. Zenyatta naturally missed the break and ambled around ten lengths and more off the lead on the backstretch before circling the entire field to totally overwhelm her rivals.

Cue unbridled adulation in the Santa Anita stands. "There are times when you look and you say, 'boy, can she get there?'" marvelled Shirreffs. "But you can tell when she puts in gear – she lowers her head, pauses, and goes vroom."

Despite her estimable record, Zenyatta lost out in the Horse of the Year ballot to the three-year-old Rachel Alexandra, who had compiled her own flawless campaign on the east coast. They never met, even though Zenyatta was kept in training as a six-year-old in 2010, when she won five more Grade 1s before heading to Churchill Downs for the Classic and only the second run on her life on a dirt surface.

Mike Smith let her lope along seven leagues adrift of the remainder, even further behind than she usually was; the magnificent mare duly unleashed her customary late charge down the stretch, where her jockey unleashed his own volley of unedifying whip cracks in a desperate bid to thwart Blame, a well-ridden Grade 1 performer with home-track advantage.

Zenyatta was in front two strides after the wire, of course, but it was two strides too late. Imagine if Black Caviar hadn't actually won at Royal Ascot after Luke Nolen dropped his hands and you're getting the picture. But such an unwelcome result did not prevent the crowd's showering of the runner-up with their post-race cheers as the victorious Blame left the track almost unnoticed. It might not have been fair but it was understandable: he might not have shot Bambi's mother but it would not have been a surprise if police had asked him to help with their inquiries.

That Zenyatta failed at the last – so narrowly, in adverse circumstances, under a questionable ride – should not really be held against her, and it certainly did not hurt her at the Horse of the Year vote, which she finally won by a landslide. "I always tell people God made a very special horse when he created Zenyatta," suggested Shirreffs. No quibbling here.

Had she been simply the mare who propagated the training career of a young permit-holder called Nigel Twiston-Davies, she would have been worthy of inclusion; that she was also one of the bravest and most inspirational mares ever to jump a hurdle comes as a bonus.

The first foal of Emperor’s Gift – herself Twiston-Davies’s first winner as an amateur rider – was one of only eight survivors of a virus that ravaged the stud where she was foaled and the experience seemed to inform her outlook on life.

Owned by the trainer, bred by his father, ridden by his business partner Peter Scudamore and ridden out every morning by Scu’s wife Marilyn, she grew into an admirable mud-loving campaigner who captured the hearts of the jumping public along the way. Scudamore rode her to victory in, among other big races, the Keith Prowse Long Distance Hurdle at Ascot in 1987 and became so attached to the mare that he named his house after her.

Still going strong as a nine-year-old, she beat Trapper John with great ease to land Haydock’s Long Distance Hurdle under Graham Bradley in 1990, and now has a room named after her at the trainer’s local pub.