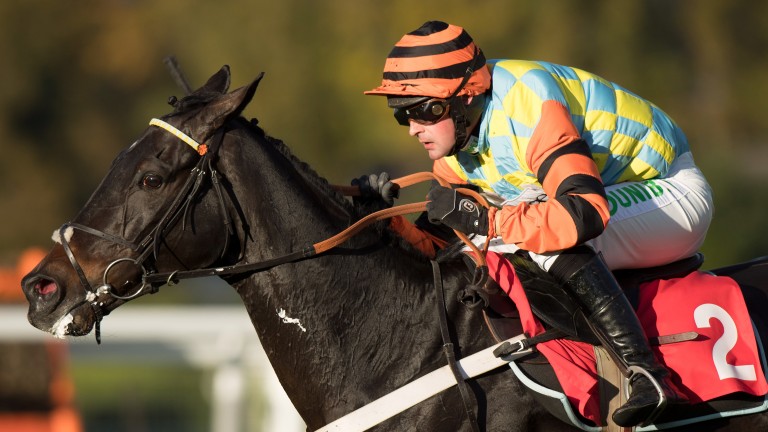 Might Bite (Nico de Boinville), on the way to victory in the intermediate chase at Sandown, impressed with his jumping
Edward Whitaker
1 of 1
By Jack Haynes UPDATED 6:21PM, NOV 12 2017

After Might Bite snatched victory from the jaws of defeat in the RSA Chase last season – drama originating from a stomach-churning final-furlong swerve – his trainer Nicky Henderson made a bold pronouncement: “The future is obviously enormous.”

There were no grounds to doubt that prediction on a sunny winter’s afternoon at Sandown when Might Bite produced a first performance of the 2017-18 season that was a resounding success whichever way you looked at it.

Victory was no certainty, although it was very much expected. What could not be predicted was the manner in which Might Bite – who has established a reputation as an unpredictable customer – would go about tackling three inferior rivals. 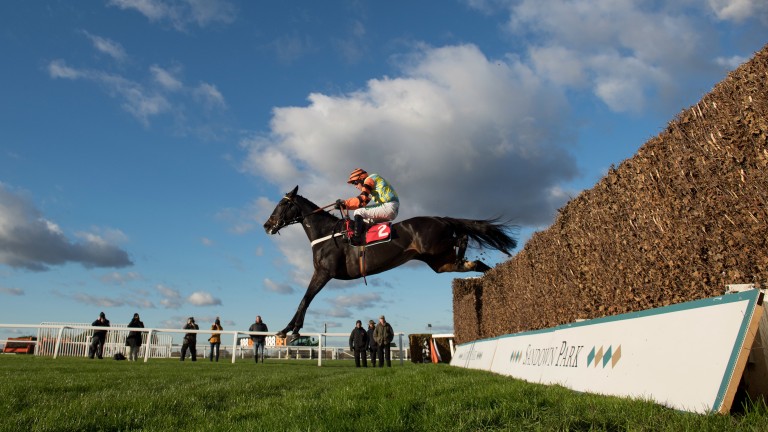 Might Bite on the way to victory. Trainer Nicky Henderson says: “He’s got so much scope and presence about him and he’s got character to go with it"
Edward Whitaker

He was impeccably turned out, sporting an poignant poppy on either hind quarter on Remembrance Sunday. That was the first class touch.

Owned by The Knot Again Partnership, Might Bite showed no sign of repeating previous misdemeanours, jumping slickly round Sandown before powering up the unforgiving uphill finish to register an eight-length win.

With a twinkle in his eye, Henderson said: “He jumped great, kept straight – there are no foibles in him at all. He just could be very, very good.”

He said: “He did everything we expected him to do, it was very straightforward and he'll come on for the run.

“He’s got a big stride, a high cruising speed and jumps for fun – he’s a joy to ride.”

Might Bite’s intelligent, measured, and occasionally exuberant jumping ranked as the most pleasing aspect of his return, and it is one of many reasons why he is building an ever-increasing following.

Henderson said: “He’s an entertaining, swanky and gorgeous horse, he’s got so much scope and presence about him and he’s got character to go with it. 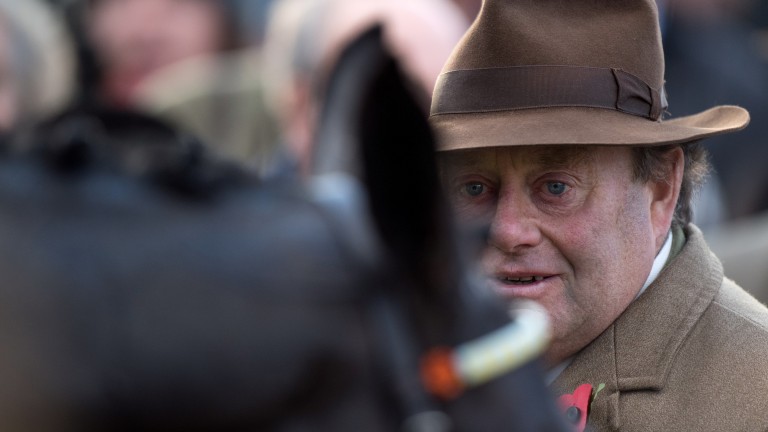 Henderson takes stock of Might Bite after his victory. "He’s always going to be worth watching, as you never quite know what might happen next"
Edward Whitaker

"I can’t deny he has that unpredictable side to him. We all saw what happened at Cheltenham and Kempton, but it’s something I like to forget.

“He’s always going to be worth watching, as you never quite know what might happen next. He’s box office, but let’s hope he'll be box office for the right reasons and not the wrong reasons.”

This performance left us all wanting more. That will come on December 26 at Kempton, one year to the day after Might Bite fell at the last when leading in the Kauto Star Novices' Chase.

This time he will run in the 32Red King George VI Chase, bidding to give Henderson a third win in the Christmas highlight after he tasted victory with subsequent Gold Cup winner Long Run in 2010 and 2012.

Ante-post prices for the King George were initially unchanged with many bookmakers, but following support Might Bite was cut to a general 3-1 chance (from 7-2), while he is generally 8-1 (from 10) for the Timico Cheltenham Gold Cup in March.

Henderson said: “The big test will be on Boxing Day and the others can go and knock the merry hell out of each other at Haydock. We may just give him a racecourse gallop in the meantime.”

Jingle Bells will be the herald to Might Bite's next performance. It is not to be missed.

FIRST PUBLISHED 5:23PM, NOV 12 2017
He’s box office, but let’s hope he will be box office for the right reasons and not the wrong reasons