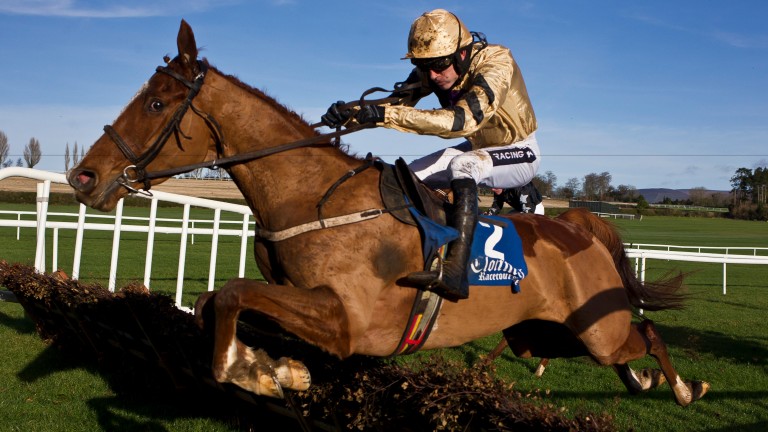 Crack Mome could leap to the forefront of the reckoning for Cheltenham with a win at Punchestown
Patrick McCann
1 of 1
By Brian Sheerin 3:16PM, JAN 13 2017

There is quite an open look to the Supreme Novices' Hurdle at present, but that could all change shortly after 2.10 as a field of of six bid to highlight their Cheltenham credentials at Punchestown.

Willie Mullins has unleashed his best two-mile novice hurdlers in this Grade 2 contest throughout the past three seasons, with two - Vautour (2014) and Douvan (2015) - going on to land the Supreme come March.

If it wasn't for Altior, Mullins would have sent out three subsequent Supreme winners in this race following the easy success of Min 12 months ago, while he also won this race in 2013 with Mozoltov.

The champion trainer relies on Crack Mome in a bid to extend his winning sequence to five.

Just like Mullins' recent winners, Crack Mome began his career in France and the manner in which he got off the mark at Clonmel left an impression that he could have a nice future. Having previously tasted success on heavy ground in France he ought to have no trouble with Punchestown's going.

Already as short as 10-1 for the Supreme Novices' Hurdle after his Clonmel win, those odds may shorten should he pass his latest test under Ruby Walsh.

Walsh's father Ted looks to have a major contender for top novice honours this season in the shape of Any Second Now. The JP McManus-owned homebred caused a 66-1 shock at Navan last month when comfortably landing a hot maiden hurdle in the hands of Ian McCarthy.

Waterford handler Margaret Flynn is both nervous and excited as she waits to see how stable star Dr Mikey handles the step up in class following a comfortable maiden hurdle win at Cork last month.

She said: "We don't have anything else like him, so first and foremost we hope he comes back safe and sound.

"Our one worry is the ground for him as it will be real winter conditions and he's a good actioned horse.

"He deserves to take his chance and if he runs well we would be thinking about running him in four weeks time in a Grade 1 novice hurdle at Leopardstown."

Gordon Elliott relies solely on Runfordave, who looked to have a race at Limerick sewn up last time but for over-jumping the second-last hurdle and falling.

Elliott said: "He looked to be travelling better than anything else in the race when he came down at Limerick. It was just a novicey mistake and he's in great form ever since. I expect him to run well."

The field is made up by the Gigginstown duo Coquine D'Aunou and Calino D'Airy, both of whom are taking the step up in grade following maiden hurdle wins last time.