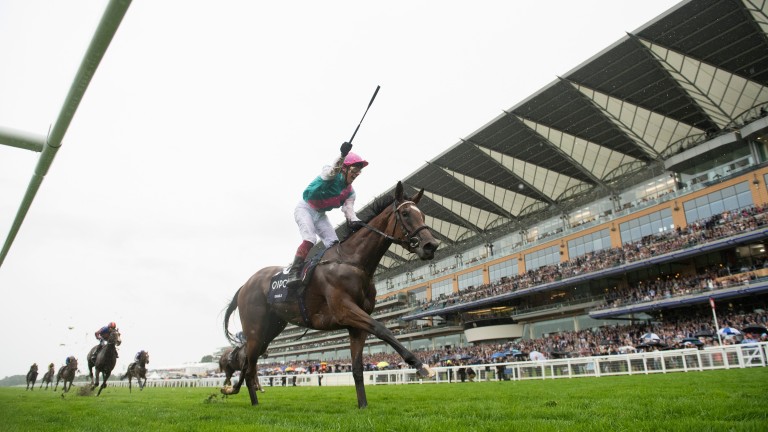 Enable: "There is an extra week between Ascot and York this year, which has helped with her preparation"
Edward Whitaker
1 of 1
By David Milnes and Lee Mottershead 6:00PM, AUG 23 2017

Enable must defy history if she is to become the first ever filly to notch the King George VI and Queen Elizabeth Stakes-Darley Yorkshire Oaks double just three years after trainer John Gosden tried and failed to complete the sequence with Taghrooda.

Taghrooda was turned over at odds of 1-5, becoming the latest in a series of costly reversals that have included 4-11 loser Sariska in 2009, while Oaks heroines Snow Fairy and Was were also turned over in recent years.

On a more positive note, if there was ever a filly built to handle a demanding schedule it is Enable, who swept up two Classics in emphatic fashion before justifying the sporting decision of connections to divert her from her original schedule to take in the King George.

An Ascot slog on soft ground may have left its mark on less well-built fillies, but Khalid Abdullah's hope has continued to look her usual exuberant self at home.

"There is an extra week between Ascot and York this year, which has helped with her preparation. She's pretty versatile with ground conditions, as it was quick at the Curragh and soft at Ascot."

As to the possibility of a messy race, Gosden added: "I'll leave it to the jockey as regards tactics but they usually go a good gallop and we know she stays the trip."

The Newmarket trainer also fields Royal Ascot winner Coronet, who is on a recovery mission after finishing a modest fourth to her stablemate in the Irish Oaks.

Gosden said: "Coronet didn't run her race at the Curragh when she got a bit far back and could never get into it. She should like the galloping track, and as she's a Group 2 winner it makes no sense to go back to that level and carry a penalty."

Varian keen to have a crack at the favourite

Enable is certainly not the only filly going into the Darley Yorkshire Oaks off a big win and with the potential to climb even higher.

On her Group 1 debut at the Curragh, Nezwaah romped to victory in the Pretty Polly Stakes, scoring by three and a quarter lengths under Andrea Atzeni and finishing with a gusto that suggested the step up from 1m2f to 1m4f would not be a problem.

Heavy rain ruled her out of a trip to Goodwood, but connections believe that decision will prove to have been a wise one.

Roger Varian, who landed a fillies' Group 1 with the Atzeni-ridden Ajman Princess at Deauville on Sunday, told the Qipco British Champions Series: "It was frustrating to miss the Nassau but I think it was the right call and we've got a fresh filly on our hands to have a crack at Enable and the others.

"Nezwaah is a Group 1 winner but I think she's still slightly unexposed and I'd say she's the unknown quantity in the line-up. If the mile and a half brings out a bit more improvement then we will have a very exciting filly on our hands."

Varian added: "I've got every confidence she will get the trip. She was very strong at the line at the Curragh when she won the Pretty Polly. Her mother got better with age and she improved when we stepped her up her up to a mile and a half."

Stoute says Queen will "run a big one"

No trainer has won the Yorkshire Oaks more often than Sir Michael Stoute yet it is 13 years since Quiff gave him a ninth success in the race, equalling the record set by Matthew Dawson between 1868 and 1884.

Stoute this time has two of the six runners, in the guise of Breeders' Cup heroine Queen's Trust and last season's course-and-distance Galtres Stakes winner Abingdon, who carries the soon-to-disappear colours of Ballymacoll Stud, carried to victory in the race on three occasions, twice by Islington and once by Hellenic, both also trained by Stoute.

"Queen's Trust hasn't had the rub of the green this year," said Stoute.

"In the Prince of Wales's she got badly interfered with and was really coming home, then the ground was too soft for her in the Nassau, but she is in good shape. She'll run a big one.

"Abingdon is solid. She's won at the track in the Galtres last year and has been running well this year.

"I hope she'll be in the frame. I'll be happy with that, but she loves top of the ground and doesn't want it softer than good."

Alluringly has scores to settle

The form book suggests Alluringly faces a huge task if she is to provide Aidan O'Brien with a fifth win in the Darley Yorkshire Oaks.

The Ballydoyle filly has met Enable three times this season and after running the big-race favourite to a length and three-quarters in the Cheshire Oaks, the daughter of Fastnet Rock was trounced by Enable in both the Oaks and Irish Oaks.

Alluringly, a Listed winner at Gowran on her most recent start, will be attempting to follow Ballydoyle's Alexandrova, Peeping Fawn, Tapestry and Seventh Heaven on the Yorkshire Oaks roll of honour.

O'Brien said: "We decided to send Alluringly back up in distance as we felt it would be worth giving her another shot at a mile and a half. She's in good form and we're just hoping she runs a good race."

FIRST PUBLISHED 6:00PM, AUG 23 2017
We've always had the Yorkshire Oaks in our minds for Enable even before the King George and she's coming into the race fresh

Classy Mohaafeth shows top-class ability but Stradivarius fans left frustrated Graeme Rodway on the importance of getting the right rider in the Sandringham Another for Ireland? Coronation Stakes often slips out of home team's grasp Moore has been booked on Mother Earth from day one - is it the right choice? It's four for Mark Johnston - not Stradivarius - as Subjectivist strikes gold Ascot collector's item as Dettori's flying dismount outshone by tearful groom