Talk of the Tracks HEREFORD Wednesday

Williams thrilled to get winner at local course with Super Sam 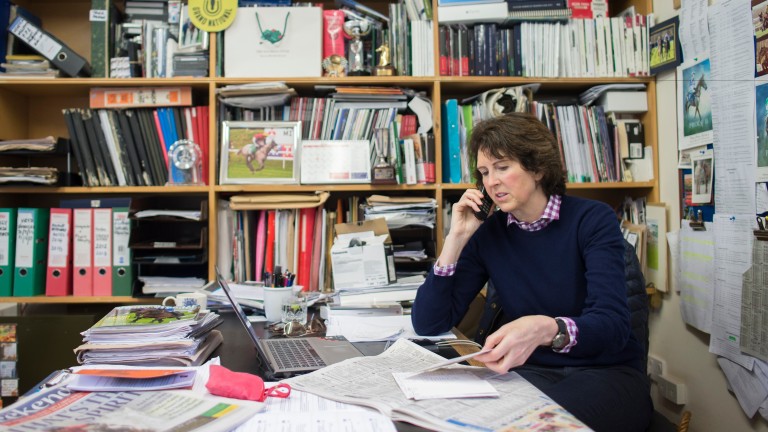 Venetia Williams: happy to have a winner at reopened Hereford
Edward Whitaker
1 of 1
By Andrew King 9:38AM, NOV 24 2016

Few trainers wanted to win a race at the newly reopened course more than Venetia Williams and she realised that ambition when Super Sam ploughed through the muddy conditions to comfortably land the spoils in the 2m3½f handicap hurdle.

Williams, based at Aramstone on the banks of the River Wye just over ten miles from Hereford, was hopeful that the seven year old would be suited by the rain-softened ground on his first outing for 676 days.

She said: “Obviously I wanted to get on the scoresheet at my local course now that it is open for business again and I could not be more happy that the horse has won and I am especially pleased for his owner John Timpson, who has come to see him win.”

Timpson said: “I have not been to Hereford for what seems an age but the last time I was here with my late wife Alex we had a winner called Thievery, who was trained by Henry Daly. It’s good to be back again and keeping Alex’s memory alive.”

Timpson, who owns a nationwide shoe repair business, is also a fan of rainy weather. He explained: “It’s very good for us as any little holes in people’s shoes need repairing when it rains. I visited a few shops over the weekend and they all reported record takings for the time of year.”

Conditional rider Bridget Andrews had that deja vu feeling pulsing around her head as No Hassle Hoff turned for home with a clear advantage before romping away with the 3m1½f maiden hurdle.

At Fontwell earlier this month Andrews and No Hassle Hoff held a seemingly unassailable advantage in a two-horse race only for the four year old to mistime his jump at the last hurdle and buckle over on landing.

Andrews knew she needed to make sure there was no repeat calamity as she made the turn for home. She said: “I was thinking we have been here before and there was no way I was going to let the same thing happen again.

“It was really bad luck at Fontwell as he had been in front a long time and just lost concentration - I suppose it was partly him and partly a bit my fault, but he has redeemed himself this time around and showed no ill-effects for the capsize.

“He is just a galloper and not very quick which is just what you need when the ground gets as testing as it is out there. That win will have helped his confidence a lot after last time and he should go on from here.”

There was a decent midweek crowd of 1,512 at the course’s third meeting since the gates reopened this autumn and they were treated to some competitive racing. It’s great to see the course back in action again.

FIRST PUBLISHED 5:40PM, NOV 23 2016
I could not be more happy that the horse has won and his owner John Timpson who has come to see him win