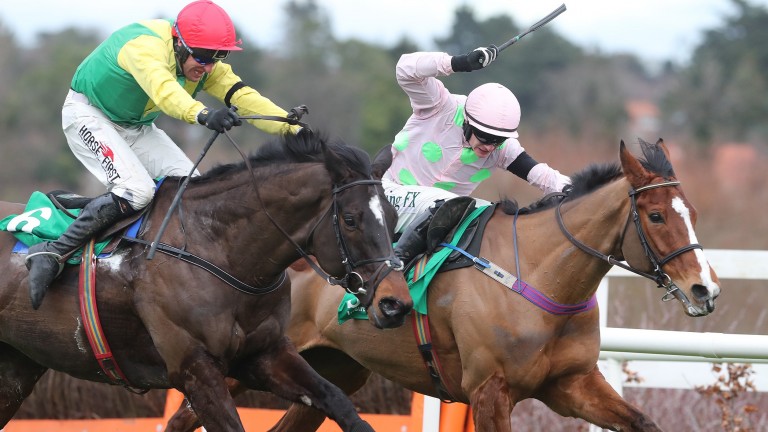 Is Faugheen playing for minor honours in the Champion Hurdle now?

Tom Bellamy, jockey He probably didn’t quite look the force of old at Leopardstown but I don’t think Willie Mullins would take him to Cheltenham if he wasn’t there to win. On that basis it would be a no.

Charlie ­Longsdon, trainer That could well be the case after two disappointing runs this season and with Buveur D’Air looking in imperious form. However, you can never underestimate Willie Mullins and you might see a different horse on better ground at Cheltenham.

Robbie Power, jockey On his last two runs, yes. But, you know what, I wouldn’t bet against Willie getting him back to somewhere near his best when it matters next month. The best piece of form for this year’s Champion Hurdle is last year’s Champion Hurdle, so Buveur D’Air will be hard to beat.

Tim Smith, Ladbrokes odds compiler The race looks so bad that any horse with a leg in each corner has a place chance, but if he can’t beat a horse having a Stayers’ Hurdle prep then he will surely struggle to beat Buveur D’Air. Unfortunately classy two-mile hurdlers seem to be a dying breed, with the good suitable Flat horses sold abroad and the National Hunt stock fast tracked to chasing.

Evan Williams, trainer Yes, probably. But there are a lot of horses playing for minor honours in the Champion Hurdle. There is an obvious favourite in Buveur D’Air and ,while he was far from impressive on Saturday, he is the standout. Faugheen had no right to come back as good as he was. He ran well at Leopardstown and just got beat by a progressive horse.

Is Supasundae your idea of the Stayers’ Hurdle winner?

Tom Bellamy He looks classy and he can travel through a race with considerable ease and then quicken off a strong gallop. That might be something that some other Stayers’ Hurdle candidates don’t have.

Charlie ­Longsdon It was a great performance but it was over two miles. He’s probably a worthy favourite and he has all-important Cheltenham form. However, I love the way Sam Spinner races and it would be great for racing if he were to win. La Bague Au Roi has been slamming the mares over three miles and her weight allowance could make her competitive if she runs.

Robbie Power Yes. I’d certainly like to think so. You would have to say he has probably run the best trial of any for the Stayers’. He stays too and I have no worries about his stamina. He feels like a much better horse than he was last season.

Tim Smith He has the class and the track form but he has been beaten on both tries at three miles and I’m not convinced he’s an out-and-out stayer. There’s a bit of Hardy Eustace about him and I would supplement him for the Champion Hurdle. He has just stuffed the second favourite and a failed chaser is a 4-9 jolly, so it doesn’t look like mission impossible.

Evan Williams He’s my idea of the winner and should be favourite. He put in an excellent performance in the Irish Champion and I understand why they’re going down the staying route as you go where you’ve got a favourite’s chance.

How strongly did you rate Min’s performance in the Dublin Chase?

Tom Bellamy It wasn’t far off the top drawer, I thought Min was really impressive. He looked very professional.

Charlie ­Longsdon You have to rate it very highly. To win any Graded race by 12 lengths eased down is very impressive but if he goes to Cheltenham, which I am sure he will, it will be a very different ball game against the likes of Altior and Politologue.

Robbie Power I made the running on Special Tiara and we went a strong gallop. That performance from Min was the best trial so far this season and better than anything we have seen in Britain. Special Tiara gave me a fantastic thrill and he jumped like a buck. If the ground is good at Cheltenham, he’ll run really well again.

Tim Smith With Yorkhill seemingly cooked going round the paddock, it didn’t take much winning but Min beat the champion hurdler over the smaller obstacles and he’s starting to translate that class to chasing.  I won’t spend much time looking at the Champion Chase until we know what’s going on with Douvan and Altior, but Min isn’t one to underestimate.

Evan Williams He was brilliant. He’s a classy horse and a big contender for the Champion Chase. Altior is the obvious one for Cheltenham but Min has been doing everything asked of him and is going the right way. 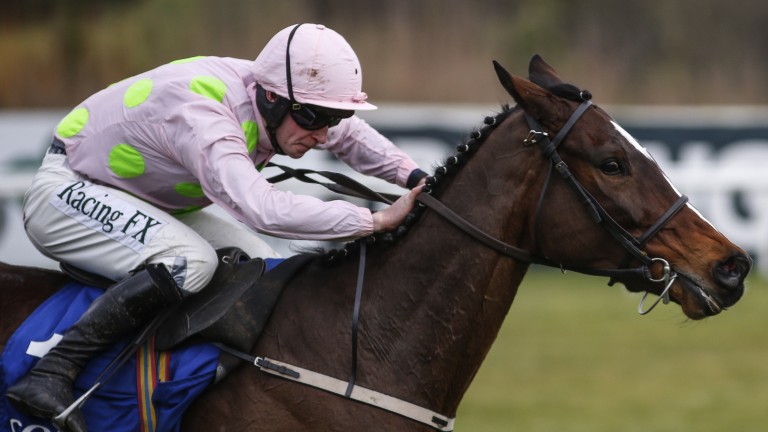 Is Footpad banker material in the Racing Post Arkle?

Tom Bellamy I think so. I haven’t seen a novice jump with his accuracy over two miles going as quick as they go. He doesn’t put a foot wrong. He looked very good.

Charlie ­Longsdon He has been impressive and I’m sure people might see him as a banker, but I don’t think it will be that easy. The ground will be very different in March and Petit Mouchoir beat him in the Champion Hurdle last season. Henry de Bromhead has had a quiet month and his horses are likely to be in better shape at Cheltenham. Also don’t write off Sceau Royal.

Robbie Power He’ll probably win but I would expect Petit Mouchoir to finish a lot closer to him there. That was only his second run over fences and he would have learned a lot. He looks the value in the race.

Tim Smith The Arkle usually has a predictable outcome and Footpad looks like a typical winner. He guns out in front and jumps like an old hand. The one who might prove difficult to burn off is Saturday’s rival Petit Mouchoir. He beat Footpad three times over hurdles and a clear round could see him reverse Leopardstown form.

Evan Williams You’ve got to love the way he goes about his business and I can’t see beyond him in the Arkle. The owners are having an unbelievable season and Anthony Bromley is some man at finding horses. I thought Petit Mouchoir ran a good race in second and the stiff finish at Cheltenham will suit him.

What else has impressed you this weekend with the Cheltenham Festival in mind?

Tom Bellamy I won the Towton on Ballyoptic at Wetherby. He has an entry in the RSA Chase as well as the Stayers’ Hurdle. He’ll be better on better ground. He was rated 164 over hurdles a couple of years ago and if he can reach that sort of level over fences he would have every chance in the RSA. He didn’t ride like a novice.

Charlie ­Longsdon I thought Terrefort was very good and tough in the Scilly Isles. He’s only five and looks to have a great way of going. He slammed one of mine first time out at Huntingdon who is a very nice type, so he has to be a proper 155-plus horse and will be very competitive in whichever race his owners run him at Cheltenham.

Robbie Power Samcro, obviously. It won’t happen, but if he turned up in the Champion Hurdle I would give him a huge chance. He’s a banker in the Ballymore. I thought Monalee put up a brilliant performance too after coming back from a heavy fall at Christmas.

Tim Smith Zero points for originality but festival regular Tully East caught the eye in the big handicap chase and he should go close in the Brown Advisory & Merriebelle Stable Plate. He made a couple of clumsy blunders on Saturday but he still arrived full of running between the last two fences and another couple of furlongs at Cheltenham will give him a bit more time to find his rhythm.

Evan Williams Blackbow, who won the bumper at Leopardstown on Saturday. He would have to be a serious player for the Champion Bumper at Cheltenham. It looked a strong race as the second and third, Rhinestone and Brace Yourself, are nice types.

What do you like the look of in Saturday’s Betfair Hurdle?

Tom Bellamy Kalashnikov is a progressive novice. This will be his handicap debut and he looks very decent. I thought he kept to his task well in the Tolworth even when he was beat. He looks like a tough horse, which you need in a big handicap.

Charlie ­Longsdon There wouldn’t be a dry eye in the house if Lalor were to win and I really hope he can go close. But the two horses I like the look of are Jenkins, who will be running off a mark of 143 when his new handicap mark is 151. I also rate Kalashnikov as a horse with a massive future, so if the ground dries up a bit and Amy Murphy decides to run he would be a good each-way bet.

Robbie Power Bleu Et Rouge. He caught my eye at Ascot before Christmas and could take a bit of stopping.

Tim Smith Donald McCain’s revival is one of the most heartwarming stories of this season and Waterlord looks overpriced to continue the yard’s fine recent run. He eventually paid the price for going toe-to-toe with a good novice in desperate ground at Haydock but his understandably weak finish allows him to sneak in here off 135 and I’m sure I’ve bet worse 33-1 pops.

Evan Williams I’m praying our grey Silver Streak can sneak into the race. He needs a few to come out but would relish the hurly-burly of a big field and could end up being a big price at 16-1. He has run very well on his last two starts in big handicaps and with his progressive form deserves to take his chance.

FIRST PUBLISHED 7:47PM, FEB 4 2018
I wouldn’t bet against Willie getting him back to somewhere near his best when it matters next month

Ruby Walsh: Faugheen's first defeat was my fault - I was trying to be too clever