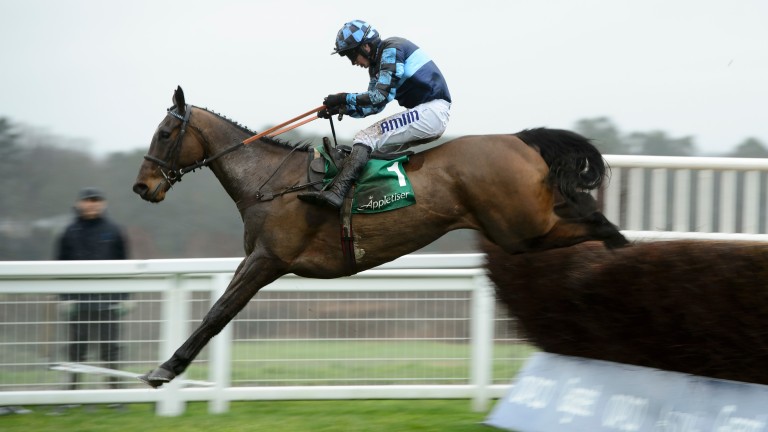 Top-weight Sausalito Sunrise bids to make history in the prelude to the main event in which he carries a stone more than when accounting for many of these rivals a year ago.

No horse has won this in successive years but the Diana Whateley-owned eight-year-old will hope to end that sequence today after beating Upswing by a length and a quarter last year.

The Philip Hobbs-trained stalwart will be met again by that rival in this year's contest as well as Cogry (fourth), Shotgun Paddy (fifth) and Le Reve (tenth).

Local favourite Any Currency was originally targeted at the now scrapped cross-country race but trainer Martin Keighley is adamant that the 13-year-old will be just as effective over regulation fences on his reappearance just as he was when last seen at the track in April.

Seven is the number

Seven-year-olds have proved the key to this in recent times with that age group prevailing in four of the past five years.

Not surprisingly in such a competitive contest, favourites have struggled with only one outright market leader, Galant Nuit (9-2) in 2009, obliging in the past decade.

Philip Hobbs, trainer of Sausalito Sunrise
He won the race last year and is ready to start back but he's a stone higher in the handicap this time around. He seems in good order and he should run a respectable race as he always does.

Jonjo O'Neill, trainer of Minella Rocco, Beg to Differ and Upswing
It is a big ask for Minella Rocco. To be running over this sort of trip on his first start for so long will not be easy. He's in good form and I hope he will run well but, as I said, he is up against up. Beg To Differ was due to run at Bangor but he got loose at the start and that was the end of that. He is a bit of a monkey. We are dying to get a run into him and it is the same story for Upswing who seems in good nick.

Colin Tizzard, trainer of Viconte Du Noyer and Fourth Act
Viconte Du Noyer is taking a massive step up in trip as he's only gone 2m4f, so it's a step into the unknown. With all these new horses there must be a stayer among them, and he's the most likely of them. Fourth Act ran really well at Ascot, where he was staying on. He's a different horse this year– a lot stronger – and that was a good strong run.

Kim Bailey, trainer of Un Ace
He's fine heading into the race which is competitive as you would expect but one thing we don't want is too much of this rain they say is on it's way.

Emma Lavelle, trainer of Shotgun Paddy
He ran a blinder in the race last year and is down a few pounds but he could do with the rain to arrive to slow a few of the others down. He's in really good order for his first start back and the immediate plan would be the Welsh National.

Alan King, trainer of Midnight Prayer
He was runner-up in the Classic Chase at Warwick in January and, though he is now 11, he does not have that many miles on the clock. He's working as well as I've seen him and is more forward than usual and will appreciate the rain.

Martin Keighley, trainer of Any Currency
Obviously we had wanted to run him in the cross-country until it was cancelled, but he's in such good form at home, I expect him to run just as well in this. I was going to start him off at the last Cheltenham meeting but cried off on account of the fast ground so any rain won't be a bother.

David Pipe, trainer of Doctor Harper
He has been a bit disappointing on his last few runs and he needs to bounce back. His jumping definitely needs to improve. He seems in good form but he has questions to answer.

Warren Greatrex, trainer of Warrantor
He seems to have come back a stronger horse this year and should go well off his low weight. The more rain the better for him.