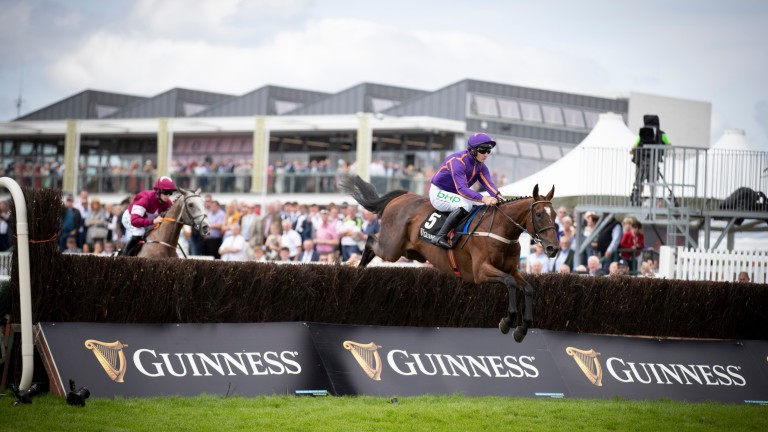 Wicklow Brave bids to extended his unbeaten run over fences to three at Listowel on Sunday
Patrick McCann
1 of 1
By Mark Boylan UPDATED 6:37PM, SEP 7 2019

There can be few horses more versatile at an elite level than Wicklow Brave, and Willie Mullins' charge will bid to extended his unbeaten run to three over fences at Listowel on Sunday.

The Irish St Leger and Punchestown Champion Hurdle-winning stalwart has taken to fences like a duck to water and renews rivalry with Jan Maat. Henry de Bromhead's runner finished second to the the ultra-talented ten-year-old in a Grade 3 novice chase at Galway last month.

Wicklow Brave, the mount of Paul Townend, could well be on route to the Grade 1 Drinmore Novice Chase at Fairyhouse on December 1 but first visits the Kerry track, where he is three from three.

The champion trainer said: "Wicklow Brave jumped well when winning at Galway. The trip shouldn't be a problem to him and we're hopeful of another good run."

Henry de Bromhead will be hoping his 133-rated Jan Maat can bridge the six-length gap with his Ballybrit rival on revised terms.

"Jan Maat ran a great race behind Wicklow Brave at Galway when second," he said. "We're getting 5lb from him this time and hopefully that will be a help."

Seven-time winner Dinons has already visited the winner's enclosure twice over fences but needs to bounce back from his latest Killarney defeat.

The Gordon Elliott-trained six-year-old was one of the leading fancies for the Albert Bartlett Novices' Hurdle at Cheltenham in March but was pulled up that day, but he has been excellently placed by connections through his career.

Elliott said: "It looks as though Wicklow Brave is going to be hard to beat and stepping back to two miles and a furlong probably isn't ideal, but it's hard to find races for him. Hopefully he can run well."

The field is completed by Court Tycoon, who appears to have plenty to find on hurdles form, five-time winner My Manekineko and Liam Burke's Indian Music.

FIRST PUBLISHED 6:00PM, SEP 7 2019
It looks as though Wicklow Brave is going to be hard to beat and stepping back to two miles and a furlong probably isn't ideal