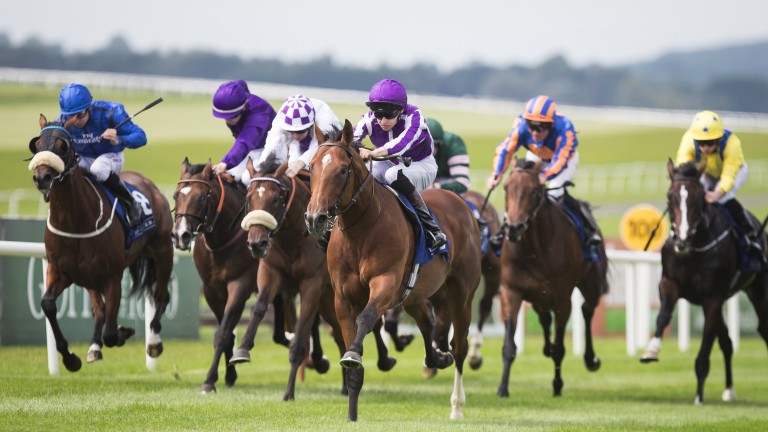 Aidan O'Brien could have another Classic contender on his hands as Saxon Warrior registered a stunning debut success in the opening mile maiden at the Curragh, earning a quote of 33-1 for the Investec Derby with Coral and Paddy Power and kick-starting a treble for the trainer.

O'Brien's two-year-olds have often needed their first run this season, and the once-raced Christopher Robin, ridden by Ryan Moore, was sent off the odds-on favourite.

However, he was firmly outpointed by stablemate Saxon Warrior, who was sent off at 8-1 and unleashed a powerful run down the outside under Donnacha O'Brien to win by three and a quarter lengths.

O'Brien said: "He looks a very smart colt. He was just ready to come racing and when Donnacha pulled him out he said he took off and really quickened. He was very impressed."

By Japanese hero Deep Impact, out of O'Brien's Group 1 winner Maybe, Saxon Warrior is bred for great things and his initial introduction confirms he is on the right track.

Saxon Warrior holds entries in the Beresford and Royal Lodge next month – both Group 2 races – as well as in the Investec Derby. 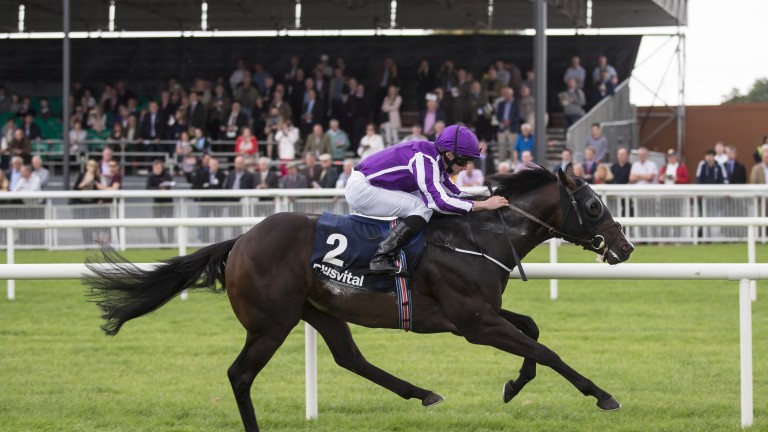 US Navy Flag, ridden by Ryan Moore and sent off the 5-4 favourite, ran out a wide-margin winner of the Group 3 Round Tower Stakes.

US Navy Flag had finished fourth in the Group 1 Phoenix Stakes on his most recent outing and made all to take advantage of this easier assignment.

O'Brien and Moore were back in the winner's enclosure just over an hour later as Rain Goddess, last seen finishing eighth of ten in the Grade 1 Beverly D Stakes at Arlington only 15 days ago, landed the Group 3 Snow Fairy Fillies Stakes by half a length.

Intimation and Dawn Of Hope, representing Sir Michael Stoute and Roger Varian respectively, filled the places, with Stoute's mare looking unlucky after finding trouble in running before staying on well to grab second.

There was a shock in the Group 3 Flame Of Tara Stakes as O'Brien's 2-7 favourite Ballet Shoes, an impressive winner of the Listed Ivawood Stakes last time, was readily brushed aside by Liquid Amber.

Trainer Willie McCreery was probably hoping for some black type with the once-raced Liquid Amber, who had finished runner-up on debut, but she quickened up well to pull alongside the favourite, whose tongue was lolling out entering the final furlong, and went right on by, sticking on well to win by five lengths under Billy Lee.

A filly with a lot of potential, Liquid Amber was introduced at 33-1 for the Oaks following the victory over a mile, and the daughter of Kitten's Joy has enough stamina in her pedigree to suggest she will come into her own over middle-distances.

Mogul mystery has Aidan's fingerprints all over it: that's why he wins the Derby One trainer, one jockey, one horse and one race to watch at Epsom on Saturday Mathilde Texier happy to be dreaming big with Epsom hope Russian Emperor Is Ryan Moore on the right Derby runner in Mogul? The aargh number: stall one for English King - but is it really a disadvantage? Moore to ride Mogul in Derby as Heffernan eyes Epsom-Chantilly double