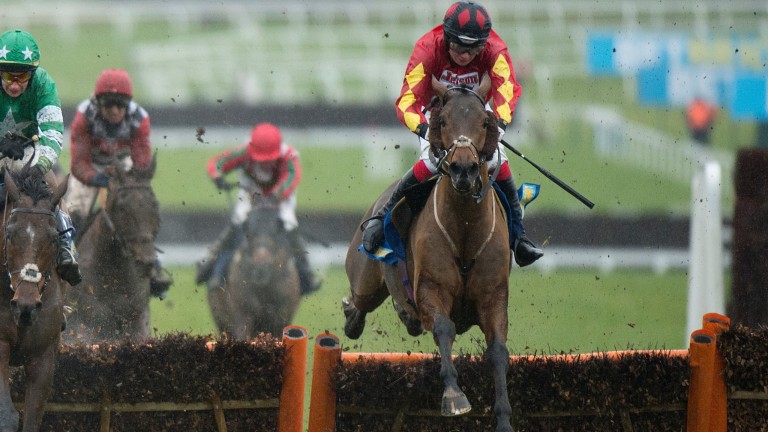 Cogry made a successful return to hurdles under Willy Twiston-Davies at Cheltenham
Edward Whitaker
1 of 1
By Richard Birch 3:12PM, JAN 13 2017

A £20,000 race which has attracted some in-form and highly progressive young stayers this year.

With underfoot conditions sure to be testing, it looks like developing into a real slog over 3m2f, and the Nigel Twiston-Davies trained Cogry, a winner at Cheltenham on New Year’s Day, appears one of the best equipped to rise to the challenge.

The Debra Hamer-trained Tobefair bids for his sixth consecutive success having opened his account off a mark of 81 at Worcester in June 2015. Now boasting an official rating of 126 following further wins at Worcester, Chepstow (twice) and Ffos Las, he faces the stiffest test of his career, but his latest success strongly suggested there is even more to come.

Lough Derg Leader is likely to be popular in the market, bringing a thoroughly unexposed profile into the race after just three runs. Tom Lacey’s six-year-old ran out a most impressive eight-length winner at Doncaster in November and looks firmly on the upgrade.

Suzy Smith, trainer of Clondaw Cian
The plan is to get him qualified for Cheltenham. The trip will suit and he is much better left-handed, but I am not sure about the ground if it is sticky and holding. He is in great form and I hope he can get in the four.

Fergal O’Brien, trainer of Barney Dwan
He was unlucky over fences at Kempton when he finished second and was unfortunately brought down last time so we have switched him back to hurdles to reassess.

Nigel Twiston-Davies, trainer of Cogry and Scotchtown
Cogry did nothing wrong at Cheltenham, of course, and we’re keeping him over hurdles for now. Whether he stays there in the longer term will depend on how he gets on this time. Scotchtown is an improving novice and this is the next step for him.

Colin Tizzard, trainer of Masters Hill and Fourth Act
We want to keep all options open with Masters Hill and qualify for the final. Fourth Act didn’t run well at Ascot last time. His hurdle rating is much lower than his chase rating, and he has seemed in really good form this week. He should have a good chance.

David Pipe, trainer of Saint John Henry
He won well last time and has gone up for that. It’s a competitive race, but he has a bit less weight to carry. He will like the conditions - the softer the better for him.

Warren Greatrex, trainer of Bon Enfant
He has been a bit disappointing, but does have ability. He has been lacking in concentration. We have had the blinkers on at home and they have worked. He will get the trip, love the conditions and has a low weight.

FIRST PUBLISHED 6:00PM, JAN 13 2017
With underfoot conditions sure to be testing, it looks like developing into a real slog over 3m2f