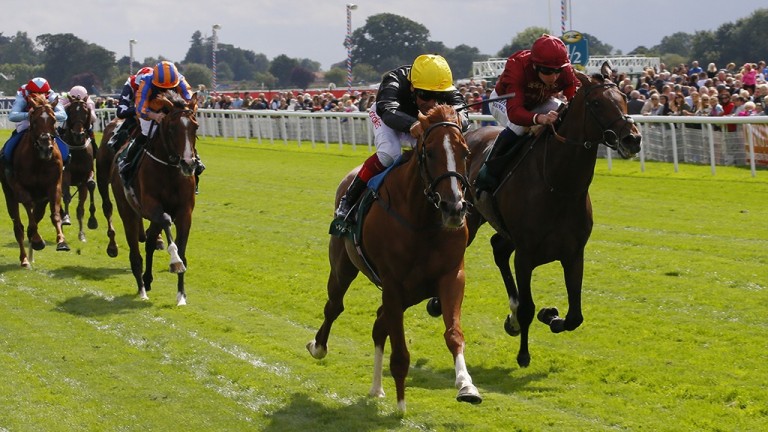 Perfect season: Stradivarius will be bidding to make it five wins from five starts this year
Mark Cranham / racingpost.com/photos
1 of 1
By Maddy Playle UPDATED 6:03PM, OCT 19 2018

Stradivarius has been wowing the crowds all season and, after scooping the lucrative stayers' £1 million bonus, John Gosden’s flashy chestnut is back to crown a perfect campaign in the curtain-raising Long Distance Cup, which has attracted just six runners.

The four-year-old showed he was the champion the staying division needed when downing Vazirabad and Torcedor in a pulsating Gold Cup at Royal Ascot in June.

It has been a flawless season for a horse who has finished out of the first four only once in a glittering 13-race career – and that was on his debut.

However, he could manage only third in this race last season when getting weight from his elders and has yet to win when the word soft has appeared in the going description.

Gosden said: "It's very sporting of the owner to have a crack at the race considering it won't be on the horse's favoured ground. He's come back from a break since York in great order and has worked nicely with Cracksman of late."

Touching on what makes Stradivarius such a competitor, the trainer added: "He has great constitution considering he's not very big but he has a great heart and a will to win."

Opposition is thin on the ground here with many would-be rivals heading for the Melbourne Cup. However, rapidly improving Flag Of Honour poses a potent threat.

Unbeaten in his last three starts at 1m6f, the son of Galileo represents Aidan O'Brien, who won the race with Order Of St George last year and Fame And Glory in 2011.

As with Order Of St George, O'Brien chose the Irish St Leger as Flag Of Honour's trial for this race and he passed his first Group 1 test with flying colours, making all and staying on powerfully to deny Latrobe and Weekender.

The colt has proved he is tactically versatile and therefore the additional trip should not be a problem. However, no three-year-old has won the race since Akmal in 2009 and Flag Of Honour also needs to show definitively that he can handle soft conditions.

O'Brien said: "The conditions probably won't be ideal for Flag Of Honour, although he has some good form on slow ground. We've been happy with him since his Irish St Leger win and the step up in trip shouldn't be a problem.

"Cypress Creek is going up in class but has shown that he stays well. Sir Erec won a Listed race very nicely at Limerick last time. He's going up a lot in grade and trip but he's a progressive colt and we're hoping for a good run."

Thomas Hobson found Flag Of Honour two and a half lengths too good in the Irish St Leger Trial in August, but Willie Mullins managed to get him back in the winning groove when landing the Doncaster Cup last time.

The eight-year-old, who has always shown a considerable amount of class, travelled sweetly into the contest and stuck on dourly to deny stablemate Max Dynamite.

Having won a Grade 2 novice hurdle on heavy ground, conditions should not be a problem for Thomas Hobson but he will need to put in a career-best performance.

Mullins said: "Slow ground shouldn't be a problem and the same applies to the trip. He's been in good form since his Doncaster Cup win and it would be great if he could run in the first three."

Desert Skyline, who beat Thomas Hobson in last year's Doncaster Cup, completes the line-up but has been beaten in all six starts this year.

FIRST PUBLISHED 6:00PM, OCT 19 2018
He has great constitution considering he is not very big but he has a great heart and a will to win