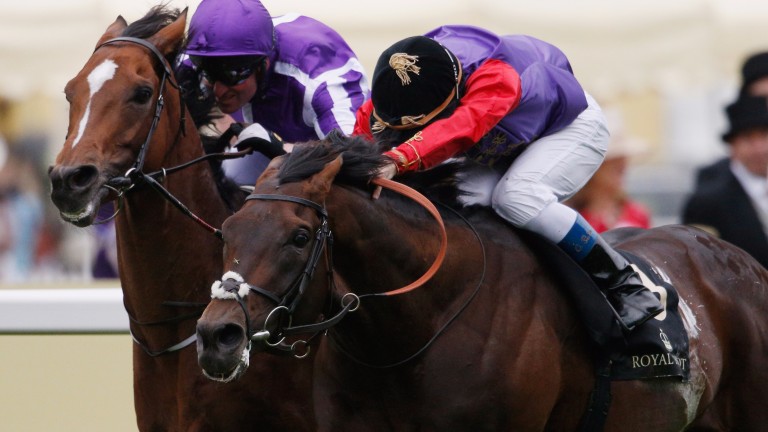 Sir Michael Stoute has revealed that next month's Group 1 Hong Kong Vase at Sha Tin is the plan for Dartmouth after the Queen's colt impressed in his latest workout on the Al Bahathri Polytrack in Newmarket on Wednesday morning.

The son of Dubawi went close to giving Stoute a hat-trick in the Canadian International at Woodbine last month when finishing a length second to Erupt, and appears to have come out of his first overseas trip in fine fettle.

Before his Canadian adventure Dartmouth had a productive summer, most notably when accounting for recent Breeders' Cup Turf winner Highland Reel in the Hardwicke Stakes at Royal Ascot – and he could be on for a rematch with Aidan O'Brien's star in the Far East.

Not long back from Santa Anita, where he saddled Queen's Trust to a memorable win in the Breeders' Cup Filly & Mare Turf, Stoute said: "The plan is to take Dartmouth to Hong Kong and we'll see how he is nearer the time.

"The race is just over four weeks away but with shipping arrangements we have about a week to decide. We're happy with him at this stage."

Dartmouth is expected to stay in training in 2017 alongside Queen's Trust and Ulysses, who is also now back at Freemason Lodge after his creditable fourth in the Breeders' Cup Turf.

FIRST PUBLISHED 1:25PM, NOV 9 2016
The plan is to take Dartmouth to Hong Kong and we'll see how he is nearer the time. The race is just over four weeks away but with shipping arrangements we have about a week to decide

Four women charged after Royal Ascot climate change protest aimed at the Queen Listed success for Katara rounds off a memorable weekend for Ryan Moore 'He could be a Guineas/Derby horse' - O'Brien excited by Point Lonsdale 'Life moves on' - Sir Michael Stoute looks forward after his most painful year Four things we learned on the fifth and final day at Royal Ascot And you thought finding the Royal Hunt Cup winner was hard . . .