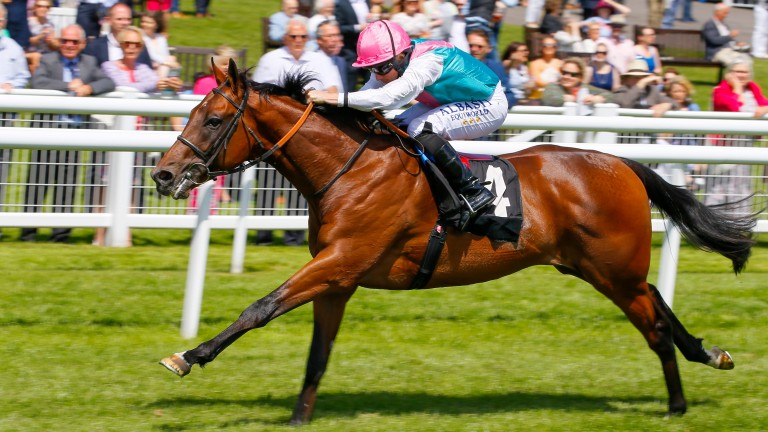 Expert Eye Sir Michael Stoute
Ted Durcan tuned up for his return to raceriding this week when shining aboard the Newbury maiden winner on the Limekilns trial ground. The form his debut win could not have worked out any better and he will take plenty of stopping in Group company next, possibly at Glorious Goodwood.

The Musidora winner had most appropriately been the subject of much attention from some visiting journalists from the Hong Kong Jockey Club on Tuesday morning but was out on her own a day later on the Al Bahathri. She was once again partnered by Frankie Dettori, suggesting he may well pick the daughter of Dansili ahead of stablemate So Mi Dar in the Nassau Stakes on Saturday week.

Al Hajar Charlie Appleby
Appleby likes nothing more than crossing the Bury Road to use the Limekilns short gallop for his two-year-olds to give them a change of scene from Moulton Paddocks. Although it is seven furlongs, you can really only get six before riders need to start pulling up, and this son Dark Angel needed all of that time and more.

Laugh A Minute Roger Varian
The son of Mayson headed a big bunch of workers who had made the short journey from Carlburg to the Limekilns short gallop. The recent Ascot third looked to have moved on from that in an easy spin under Andrea Atzeni and is due to run at York on Friday night.

The La Grange Stables ground crew could have done with some branded headgear as the rain fell across the Limekilns on Tuesday morning and Jimmy Quinn swept by under the son of Dutch Art. Bought by Charlie Gordon-Watson for 110,000 guineas at Tattersalls last year, the juvenile should be straight enough on his debut over six furlongs at Ascot on Friday.

Read more: five horses to follow in the second half of the season

FIRST PUBLISHED 2:01PM, JUL 26 2017
Rumoured to be named after his trainer, the son of Mayson headed a big bunch of workers