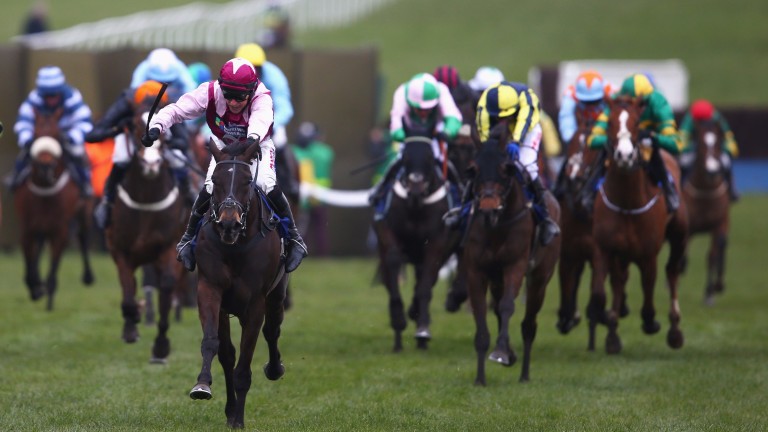 Superb Story: bids for his first victory since he landed the Vincent O'Brien County Hurdle
Getty Images
1 of 1
By David Carr 6:00PM, DEC 31 2016

Dan Skelton heads to Scotland in a bid to get the career of Cheltenham Festival winner Superb Story back on track.

His six-year-old looked to have a big future when landing the County Hurdle last March but "everything that could go wrong did go wrong" in the Galway Hurdle in July, and he then bumped his leg after returning home.

Superb Story is 7lb higher in the weights than he was at Cheltenham, whereas Aristo Du Plessis is 6lb lower in the handicap than when he took this for James Ewart 12 months ago.

Three of the last four winners were a six-year-old. The only runners of that age this time are Superb Story, Nuts Well and Eyes Of A Tiger.

Has his sights lowered

Mirsaale, who split the last two Champion Bumper winners when second in a Grade 2 novice hurdle at Cheltenham in December, takes a drop in class after finishing a remote fifth in the Fighting Fifth Hurdle at Newcastle last time.

Dan Skelton, trainer of Superb Story
You can forget about the Galway Hurdle, that was just a disaster. He'd been progressing before that, he's in good form and I'm very happy with him so I'm looking forward to getting him back on track.

James Ewart, trainer of Aristo Du Plessis
I hope he has a good chance as it's a similar race to last year and he's in good heart at home. The issue is whether he's in the same vein of form this season; he ran well at Haydock but then he was very disappointing at Doncaster.

Keith Dalgleish, trainer of Mirsaale
He's in good form and there's a bit of rain forecast, which will help. He should be capable off that mark.

Ian Hamilton, owner of Nuts Well
He wasn't right at Ayr last time but he's really well now. But he's fairly high in the handicap for what he's done

Ian Williams, trainer of Kapstadt
This is a very different proposition to his last win at Cheltenham but there looks to be the pace to allow him to settle early on, which is important. He's gone up 8lb for that win but looks to be going the right way.

Jimmy Moffatt, trainer of Captain Brown
I'm looking forward to it. He ran well last time, he was baulked on the bend and Brian Hughes thought he wouldn't have been far away otherwise. He's fresh and well, and he looks sure to get the good gallop he needs.

Brian Ellison, trainer of Eyes Of A Tiger
He's been in good form this season and ran a blinder at Doncaster last time. This track should suit him.

FIRST PUBLISHED 6:00PM, DEC 31 2016
You can forget about the Galway Hurdle, that was just a disaster