Stopwatches at the ready! Tom Collins casts his expert eye over the Epsom Dash 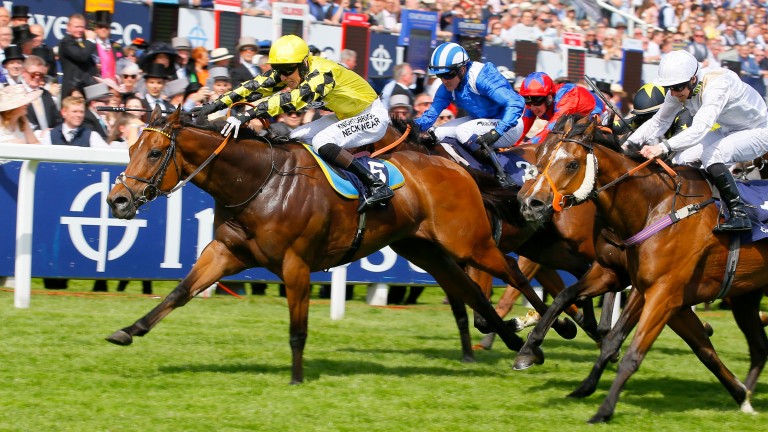 Ornate: winner of the last running of the Epsom Dash for David Griffiths
Mark Cranham (racingpost.com/photos)
1 of 1
By Tom Collins and Peter Scargill UPDATED 3:32PM, JUN 5 2021

Stopwatches at the ready. The Dash is the most exhilarating 55 seconds in racing – or 54 seconds if you are Ornate. The David Griffiths-trained sprinter smashed the course record on the downhill 5f track in 2019 and looks to repeat the feat two years on. To achieve that, he will need luck and plenty of it.

With a full field of 20 runners on a straight course that drops nearly 90ft from start to finish, the draw and coruscating early speed proves more significant than normal. A golden highway may not exist, but you rarely witness a horse make a winning move any further than three horse-widths off the stands' side rail.

That favours those drawn high, so it's no surprise that Copper Knight (16), Stone Of Destiny (17), Mondammej (18), Only Spoofing (20) are well found in the betting.

Saying that, those situated low can often cheat the draw and cut across, though their task is made harder. Stone Of Folca and Ornate won from stall two in 2012 and 2019, while Desert Law (2015) and Caspian Prince (2017) took the prize from stall one.

The race suits those who can gain an early advantage and therefore eliminate any risk of traffic problems. Ornate will look to track across from his low gate, while Copper Knight will be tough to match early. If the pace falls apart, it could play into the hands of Pettochside and Duke Of Firenze.
Race analysis by Tom Collins

Karl Burke, trainer of Exalted Angel
He's in great order and it's a bit of a gamble running him on this track, but he handled the downhill on the all-weather at Lingfield.

David Griffiths, trainer of Ornate and Duke Of Firenze
Ornate had a good winter and we gave him a break after that. He needed a run before this race so we went to Haydock where I thought he ran well. He's come on for that and he looks absolutely amazing. Duke Of Firenze has sneaked in at the bottom of the weights and we think the draw will be fine for him.

Robert Cowell, trainer of Blue De Vega
He's twice run well in this race before. I'm a little concerned about his draw but I can see him finishing fast and furious.

Tony Carroll, trainer of Recon Mission and Rose Hip
They were good winners last time and they have quite a similar chance.
Reporting by Peter Scargill