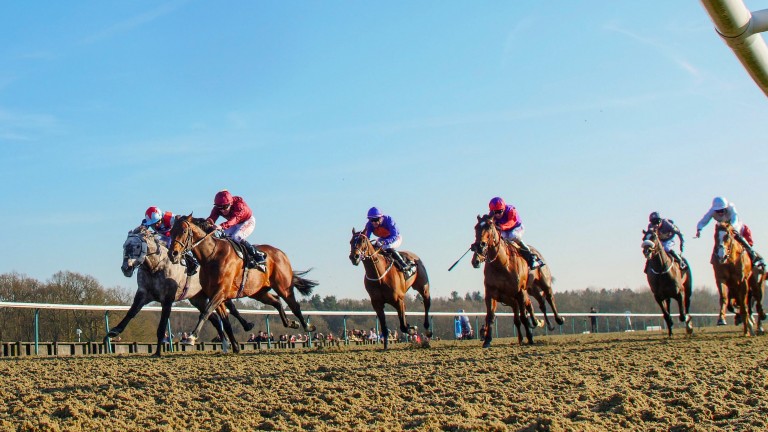 Mr Owen edges to his right hampering Master The World in the Winter Derby
Mark Cranham
1 of 1
By Maddy Playle UPDATED 6:14PM, MAR 2 2018

Master The World was awarded the Betway Winter Derby after a dramatic finish to the Group 3 contest which saw first past the post Mr Owen demoted for causing interference close home.

Mr Owen, a three-time Listed winner, came with a late run down the outside but he drifted to his right, impeding the rapidly closing Master The World in the final furlong. The final margin was a head. Battle Of Marathon was third at 33-1.

Favourite Clear Skies was settled on the rail for Ryan Moore for most of the journey, but she failed to quicken. Khalidi, who won the Bahrain Trophy last season, was stepping back in trip and stayed on nicely on the inside, while last year's Winter Derby winner Convey also made his move down the outside.

However, Mr Owen caught the eye as he came from the back of the field under Jamie Spencer – who was wearing the silks of Qatar Racing – but he drifted right in the closing stages, taking David Elsworth's Master The World off his line in the process.

Kevin Quinn, part-owner of Master Of The World, said: "Sean Levey gave Master The World a great ride and he was confident he would get the race. He came from nowhere and would have won but for the bump.

"Things didn't pan out for him last time but he goes best for Sean. He likes it here and usually runs his race and owes us nothing as he's won over £330,00 plus this. He'll run in the Easter Classic back here [on AW Championships Finals day]."

David Simcock, trainer of the wayward Mr Owen, said: "I'm delighted with that despite losing the race.

"Mr Owen spooked at a shadow close home or else he would have kept straight. He travelled strongly so we might now look at the mile on finals day."