Broadcast shows poise and promise for the future 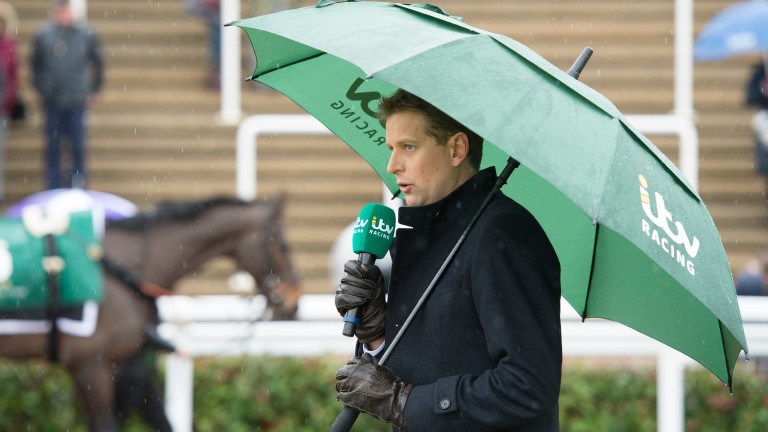 Ed Chamberlin: "I was thinking this is going to be great and then the contrast half an hour later was horrible"
Edward Whitaker
1 of 1
3:26PM, NOV 22 2019

You know what it's like. You wake up on the sofa at around lunchtime on New Year's Day, look blearily across the room, see a number of people you don't recognise. Who's he? Who's she? Some bloke called Ed and a woman named Lucy? What are you doing in my house?

"How're you feeling?" asks a beaming Ed Chamberlin. "At least we've got a nice day for it." And with this ironic touch he ushers in the second coming of ITV Racing.

The renaissance is marked with a satisfying nod to the olden days, Lord Oaksey, Dickie Davies, Lester Piggott, Brigadier Gerard, the way we were on ITV, but today is all about finding out who we are now.

There are tribes deep in the Amazon jungle who can't count above two but still know that ITV has taken over terrestrial coverage from Channel 4 – today has been a long time coming but now's the chance to see what all the fuss has been about.

The central premise of televised racing remains the same – here are some mainly brown horses running across a muddy field – but the way it's portrayed is always up for grabs. Those behind and in front of the ITV cameras have emphasised how important it is to be different from Channel 4, so it is the differences that grab the attention.

Racing being an outdoor sport, it's gratifying to see the three main presenters huddled together for warmth under umbrellas while rain spots the camera lens. It's a more natural feel than the old Channel 4 studio; it's better. Chamberlin, like the conductor he promises to be, quickly introduces his virtuoso performers.

Sir Anthony McCoy brings gravitas and a vaguely tetchy air to proceedings, and seems destined to play the slightly world-weary straight man to Luke Harvey's excitable gag-a-minute jester, with a particularly neat one involving Cogry and John Gosden. They work well together, and Chamberlin allows them to play off each other without too much interference.

In the betting ring, complete with obligatory idiot standing behind him, Matt Chapman invokes the manic spirit of John McCririck, better-dressed but still bristling with irreverence, ready with nicknames for his team members, messing up a few of his links but blustering his way bravely through. Anyone watching racing for the first time will not forget him easily, which is the plan, one imagines.

The other new faces are less memorable – it's not obvious what Victoria Pendleton brings to the party considering her self-confessed limited experience, but perhaps she'll be seen in a better light in a feature-based role on the morning magazine The Opening Show, and weather reporter Lucy Verasamy is hamstrung by the requirement to tell us it's raining, and that it'll continue to do so, which input is not altogether revelatory.

There is emphasis, of course, on catering for a new audience. Richard Hoiles does his bit by telling us that a mare is a female horse, while the quirky Q&A features with jockeys lighten the mood, the literal depiction of half a ton of horse is a nice touch, and more is hoped for from the camera high in the racecourse stables. Less is fervently hoped for from the crummy incidental music behind the readout of the runners and riders.

The racing itself is covered practically gimmick-free, which is heartening, the excitement of the sport conveyed easily and helped by several close finishes, although in-running punters won't be so thrilled that the action is around eight seconds adrift of Racing UK.

Nothing goes wrong, save a minor Musselburgh malfunction safely salvaged, and plenty goes right. The stars of the show are probably the ebullient Lizzie Kelly and the indefatigable Agrapart, which is as it should be, but Chamberlin and his crew show promise and can only get more polished with every broadcast.

"It's been great to have racing back on ITV," concludes Chamberlin.

They seem all right, Ed and Lucy, Luke and Matt, Richard and Anthony. Pop in any time.

FIRST PUBLISHED 7:00AM, JAN 1 2018
In the betting ring, complete with obligatory idiot standing behind him, Matt Chapman invokes the manic spirit of John McCririck