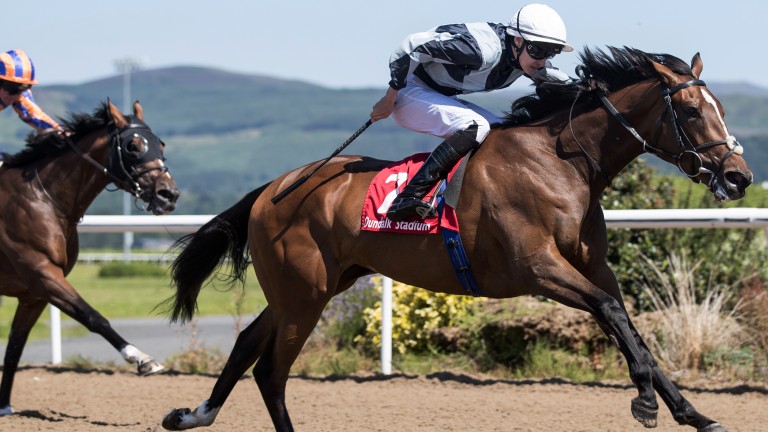 Dilmun: Joseph O'Brien's filly got off the mark at the third time of asking at Dundalk last time
Patrick McCann (racingpost.com/photos)
1 of 1
By Tony O'Hehir 4:20PM, JUL 17 2017

Between them Aidan O'Brien and his son Joseph provide half of the 12 declarations for this Listed event, the feature on the opening day of Killarney's July festival.

The race was first run in 2014, when O'Brien snr was successful with Palace, ridden by Seamie Heffernan.

Here Heffernan partners Music Box, who has been kept busy this season. A dual winner, she is set to make her 11th appearance of the campaign and her fourth this month.

Winner of a 6f handicap at Naas on her most recent start nine days ago, Music Box, one of four runners for Ballydoyle, is due to step up in trip.

Her trainer said: "Music Box takes her races very well and is in good form. She has been placed a couple of times over a mile, so going back up in distance shouldn't be a problem."

He continued: "Asking has been placed in a couple of Group 3s and has won over the trip. She's in good form.

"Puppetshow won a maiden over the distance at Limerick last time and we're hoping she might get some black type, while it's the same story with Old Time Waltz, who is up in grade."

O'Brien jnr is represented by Dilmun, a maiden winner over the trip at Dundalk five days ago, and Gowran Park maiden winner Ruby Shoes.

The trainer said: "Both fillies won their maidens nicely and I'm very happy with them. They seem to be in good form and as they have lovely pedigrees it would be great to get some black type for them."

Those taking on the O'Brien sextet include the Godolphin-owned Petticoat, whose trainer Michael Halford said: "Petticoat won her maiden nicely over a mile at Leopardstown and the form has been boosted since.

"We stepped her up two furlongs in trip in a Listed race at Naas and, while she ran well for a long way, it looked as if she didn't stay. Back in trip this time we're looking forward to a big run. She's in terrific form."

Who was Cairn Rouge?

The filly after whom this Listed event is named enjoyed a successful campaign at the top level as a three-year-old in 1980.

Trained by Michael Cunningham, the daughter of Pitcairn won the Irish 1,000 Guineas, the Coronation Stakes at Royal Ascot and the Champion Stakes at Newmarket.

Cairn Rouge was ridden to those three Group 1 victories by Tony Murray. She finished her racing days in the US and was retired having won six of her 15 starts.

FIRST PUBLISHED 6:00PM, JUL 16 2017
Both fillies won their maidens nicely and I'm very happy with them. They seem to be in good form and as they have lovely pedigress, it would be great

Moore has been booked on Mother Earth from day one - is it the right choice? Ascot collector's item as Dettori's flying dismount outshone by tearful groom Love brightens the week for Aidan O'Brien but draw-bias punters are wrong-footed Confirmed runners and riders for Friday's Coronation Stakes at Royal Ascot Cheltenham, Aintree - and now Ascot? De Bromhead adds filly to Coronation mix 'He shows everything at home - he relaxes, he quickens, he gallops'