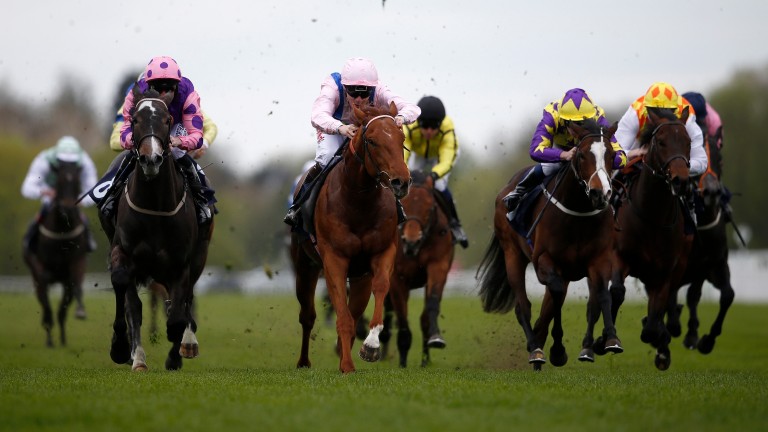 The Flat season is firmly under way and Royal Ascot will soon be on the horizon. We've assessed the two-year-old displays that have caught the attention so far and nominated three juveniles with potential to make a splash on the big stage . . .

Performance review
Made his debut in what looked like a decent early season novice at Windsor on April 10, and did things from the front under Jamie Spencer. This colt broke nicely and made nearly all the running, but wasn't hard pressed to maintain his advantage in the closing stages. He scored by only a neck, but it was a comfortable win and there should be plenty more to come.

What they said
Charlie Hills: "Rock Of Estonia has got a great attitude and plenty of boot. We worked him on Saturday and he really pleased me, and he'll improve for this. He could come back here for a conditions race in three weeks or there's one at Ascot on Sagaro day to consider."

Potential targets
A return to Windsor for a conditions race at the end of April, as is a race at Ascot on Sagaro Stakes day. Looking further forward, Rock Of Estonia could be a Royal Ascot contender. He has shown speed so could go for the Norfolk, but there is enough stamina in his pedigree to think the Coventry could be an option.
David Baxter, reporter

Performance review
Trainer Bryan Smart obviously thinks a lot of this attractive son of Sepoy as he pitched him into a conditions event at Musselburgh on Saturday for his debut and he duly delivered with an impressive victory over previous winner Requinto Dawn, scoring by three-quarters of a length. The runner-up was an easy winner of the second division of the Brocklesby and sets a decent level of early-season form and, despite a number of things going wrong in the race, Excellently Poised showed a lovely turn of foot from an unpromising position to land the prize in the style of a good horse.

What they said
Bryan Smart: "If I bring a two-year-old to Musselburgh for his debut, I like it. I trained the mother of Excellently Poised and I've always loved him. He's a real professional and he might have just one more race before going for the Norfolk or Windsor Castle Stakes."

Potential targets
The Norfolk or Windsor Castle Stakes aren't out of the question, given this horse's capabilities and the promise he showed on debut. If he is given another run before the royal meeting, it would be nice to see him record an RPR in the 90s. He also holds an entry in the Weatherbys Super Sprint in late July, a race Smart went so close to landing with subsequent Group 1 winner Move In Time in 2010.
Tom Collins, tipster

Performance review
Sent off a strongly supported 7-4 favourite on his debut at Bath on Good Friday, with plenty of money arriving in the morning, and he delivered in the style of a horse with a bright future. He displayed a high cruising speed throughout but was short of room at a crucial stage and had ground to make up close home. The way he quickened up to run down the leader, who had finished second in division one of this year's Brocklesby no less, was most impressive, especially considering Sam Hitchcott didn't need to resort to the whip.

What they said
Clive Cox: "He's got Royal Ascot written all over him as he has always done everything very nicely at home and has been pleasing us. He showed a bit of inexperience but was still good enough to come through and win."

Potential targets
Clive Cox is no stranger to juvenile success at the royal meeting – he won the 2012 Norfolk Stakes with Reckless Abandon, while the trainer's form figures with runners in the Coventry read 245 – and he certainly knows a good horse when he sees one. Chagatai clearly shows plenty at home and looks capable of holding his own in something like the Norfolk, given the pace he showed on his debut, and Sandown's National Stakes could be taken in en route.
James Pugh, The Punt

FIRST PUBLISHED 3:54PM, APR 19 2017
The Norfolk or Windsor Castle Stakes aren't out of the question, given this horse's capabilities and the promise he showed on debut