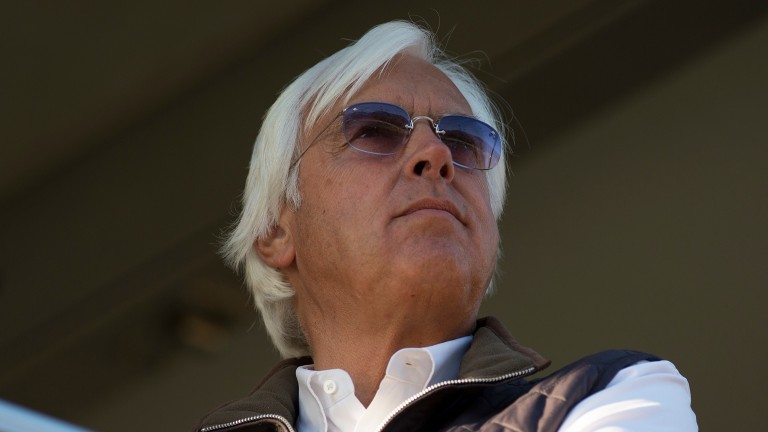 Bob Baffert: "It never gets old, especially when you can sneak in there and win one like that"
Edward Whitaker
1 of 1
By Tom Kerr at Santa Anita 6:00PM, NOV 4 2016

A clash in the Breeders' Cup Sprint between unbeaten-in-2016 sprinters A. P. Indian, Drefong and Masochistic promises to serve up a thrilling spectacle despite the race featuring just seven runners.

America's leading sprinter A P Indian is undefeated in five runs –including two Grade 1s – this year and looked in great shape working on the track on Thursday.

"He was really sharp yesterday and he's sharp today, but a lot more settled," said trainer Arnaud Delacour after that work. "He's a fast horse, but a lot will depend on the break."

Bob Baffert, the race's most successful trainer with four victories, saddles Drefong, who is on a three-race unbeaten run, most recently landing the Grade 1 King's Bishop Stakes by over three lengths.

"Drefong has speed, actually they all have speed," said Baffert. "That's what the Sprint is all about. Pedal to the metal."

Six-year-old Masochistic, the morning line favourite, is the lightest-raced of the trio, with just two outings this year.

"We've been planning for the Sprint all year long," said trainer Ron Ellis. "His races really take a lot out of him, so we've trained him very lightly. He didn't even race until his four-year-old year, so for a horse his age he doesn't have a lot of mileage on him.

"We've just been patient with him and it looks like it's paying off. We'll know exactly how much on Saturday."

Limousine Liberal was only a nose behind A. P. Indian on their last appearance and trainer Ben Colebrook is optimistic about turning the tables.

"I love his post [seven], being on the outside," he said. "I'm hoping for a fast pace and I see A. P. Indian sitting just off the leaders and us circling the field and getting the first run on them."