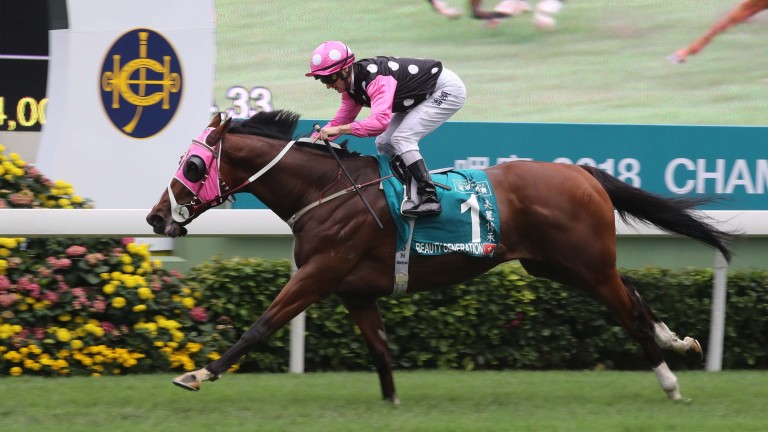 Beauty Generation extended his winning run to eight with a comfortable victory in the Chairman's Trophy at Sha Tin on Sunday morning.

The six-year-old, trained by John Moore, went into the mile Group 2 contest a perfect six out of six this season, including three top-level victories in the Hong Kong Mile, Stewards' Cup and Queen's Silver Jubilee Cup.

Despite being drawn in stall seven, Beauty Generation broke well to grab the lead and never saw another rival. Jockey Zac Purton asked the 1-5 favourite for his effort in the straight and received an immediate response, so much so that Purton once again did not have to contemplate going for his whip on the superstar miler.

Purton said: "He loves racing. He wants to get out there and do it more often!

"He had to carry extra weight and the one thing I was more concerned about was the wind. The headwind down the back-straight was really strong.

"He went out there and did what we needed him to do."

Eagle Way stayed on well for second, with the enigmatic Pakistan Star, having his first start for Paul O'Sullivan, best of the rest in third. Neither could lay a glove on the easy winner though and, scarily for his rivals, Moore said he expects more to come.

"Romain [Clavreul – work-rider] gives me his feedback, and, what I can see, the horse loves where he is and he doesn’t like getting beat. Even when he’s on the small track every morning, he wants to pass horses. He’s just amazing.

"Zac came in and said he’d improve for this. We didn't squeeze him too much for the run so there’ll be further improvement for the Champions Mile [on May 5]. That’s three weeks away and we’ll keep him ticking over."

There was a shock in the Sprint Cup as odds-on favourite Mr Stunning could finish only third, with the Richard Gibson-trained Rattan claiming the spoils.

Having his first start since January, Mr Stunning was a 2-5 shot for trainer Frankie Lor and promptly led in the six-furlong contest under Purton.

However, the small field did not go overly quick and the favourite was soon claimed by main market rival Beat The Clock, only for Rattan to fly down the outside under Chad Schofield to win by a neck.

The winner was getting 5lb from Beat The Clock and Mr Stunning, and Gibson said: "If we were going to beat those two top horses, it was going to be today with the allowance.

"The race planned out beautifully, the top two went against each other, maybe a touch early, and our stamina kicked in the finish."

FIRST PUBLISHED 9:40AM, APR 7 2019
We didn't squeeze him too much for the run so there?ll be further improvement for the Champions Mile