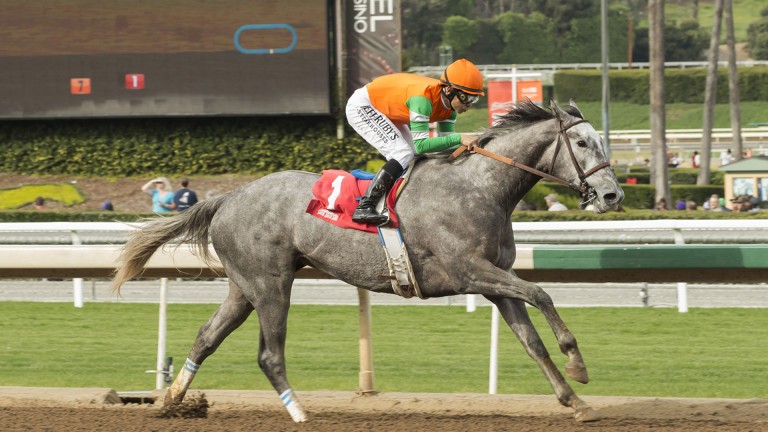 Unique Bella: America's star three-year-old filly will not run in the Kentucky Oaks owing to a shin injury
Benoit Photo
1 of 1
By Nicholas Godfrey 1:18PM, MAR 31 2017

America's top three-year-old filly Unique Bella has sustained an injury that means she will not be able to run in the Kentucky Oaks.

Trainer Jerry Hollendorfer said the daughter of Tapit is likely to be sidelined for at least two months owing to what has been described as a "shin issue".

Unique Bella has won her last four starts, including an impressive hat-trick of graded stakes this year. She would have been heavy favourite for the Grade 1 Santa Anita Oaks on April 8, her final intended start before the Kentucky Oaks on May 5.

"She has a shin that's bothering her," said Hollendorfer, speaking to the Daily Racing Form. "We'll give her a little time off."

Twelve months ago, Hollendorfer faced a similar scenario with top-class filly Songbird, who was also forced to miss the Kentucky Oaks due to a fever.

Leading New York-based three-year-old El Areeb, who won a pair of Grade 3s at Aqueduct this winter, is off the Kentucky Derby trail with a bone chip in his right knee. Trainer Cathal Lynch had been training him for the Wood Memorial on Saturday week.

Gun Runner, who chased home Arrogate in the Dubai World Cup, will have his season geared towards a rematch in the Breeders' Cup Classic at Del Mar on November 4.

"The Breeders' Cup is the ultimate goal and it will be the Classic," said part-owner Ron Winchell, speaking to the Blood-Horse. "I think the plan last year was going to the Dirt Mile knowing that he was going to progress and probably get a little better and probably go Classic this year."