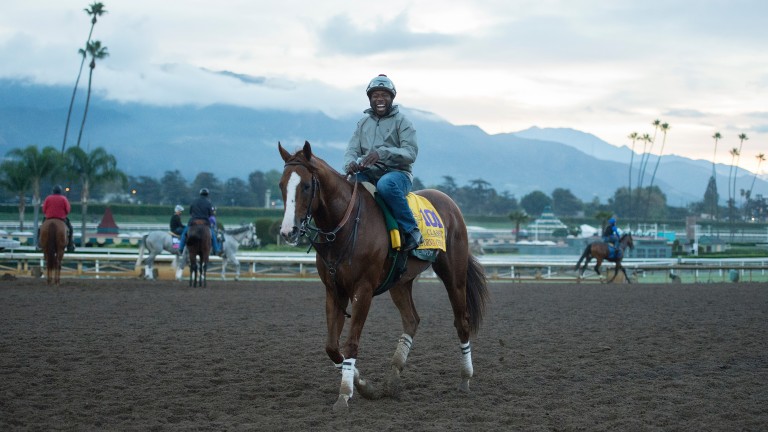 California Chrome (Dihigri Gladney) walks off the track at Santa Anita after a workout
Edward Whitaker/ racingpost.com/photos
1 of 1
By Nicholas Godfrey 6:00PM, NOV 4 2016

Same horse, same venue – but will it be a different result? Two years ago, having already won the Kentucky Derby and Preakness, California Chrome came to the Breeders' Cup Classic at Santa Anita carrying the mantle of America's favourite horse.

But his star was dimming: well beaten on his previous two starts, he finished third, albeit he was gallant and beaten only in a three-way photo-finish.

Fast forward to 2016 after a year virtually on the 'missing list' as Triple Crown hero American Pharoah stole his thunder, and the rags-to-riches superstar is back again as a five-year-old for the $6 million contest, which promises a clash of the titans with top-class rivals Arrogate and Frosted.

California Chrome, though, stands as an imposing favourite after a rock-solid 2016 campaign during which he is unbeaten through six starts – among them the Dubai World Cup and Pacific Classic, where a five-length victory means he ranks as the best horse on the planet.

Veteran trainer Art Sherman is saying little to dampen the ardour of the 'Chromies'.

"In 2014 he got beaten a neck, but he wasn't at his best mentally," said Sherman, 77. "He shipped around a lot that year and went through the Triple Crown races. There's such a difference between how he's coming into this year's Classic and then.

"Now he's got his game face on when he gets to the paddock - he's all business, he knows what he has to do. He brings his A-game. From my experience, though, I think horses are at their best when they're five years old and Chrome is bigger and stronger than ever."

While there is potential for the favourite to be drawn into a pace battle – Arrogate and Frosted both also like to race prominently – Sherman isn't worried. "He's got natural speed to clear horses but can be tactical enough to lay behind the speed," he said.

"He's not one-dimensional. The way he runs now, he's become a push-button horse; he'll do whatever Victor [Espinoza] asks of him. And, in my opinion, a mile and a quarter is the best distance for him. I wouldn't trade places with anyone. His last two races have been big - let me have one more like that in the Breeders' Cup."

Pros Seven-time winner at the top level who has taken form to a new level going unbeaten in six starts as a five-year-old, producing the best performance in the world according to RPRs

Cons Faces toughest field of his career, among them serious pace rivals in Arrogate and Frosted

FIRST PUBLISHED 6:00PM, NOV 4 2016
His last two races have been big - let me have one more like that in the Breeders' Cup