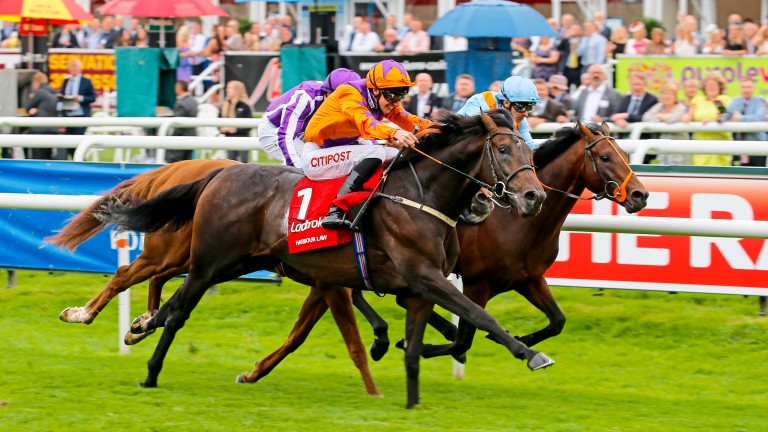 Harbour Law gave Laura Mongan a day she will never forget when winning the St Leger last season, and optimism at her Epsom yard is high as her stable star takes the first steps in a campaign connections hope will lead to the greatest staying prize of all.

The Gold Cup at Royal Ascot next month is firmly on the agenda for the son of Lawman, who gave Epsom its first Classic winner since 1969 on that memorable Doncaster day.

That triumph came under George Baker, who suffered a serious injury a fall at St Moritz in February, and Tom Queally takes over on Harbour Law.

Mongan said: "Hopefully Tom can stick to him for the whole season because we'd like to keep the continuity with the jockey and he's an easyish horse to ride.

Hughie Morrison already has two Sagaros on his mantelpiece courtesy of Alcazar in 2003 and 2005.

While he is not quite throwing the kitchen sink at Wednesday's renewal, he does field three of the eight runners in Nearly Caught, Sweet Selection and Vent De Force, whose half-brother Marmelo is another promising stayer in the camp and won a Chantilly Group 3 on Sunday.

Only Vent De Force and Maleficent Queen are not entered in the Gold Cup at Royal Ascot, which Colour Vision and Estimate went on to win after securing the Sagaro recently, although the former was successful on the all-weather at Kempton in 2012 after this meeting was abandoned.

Battersea, running for first time since a gelding operation, is unbeaten in two appearances at Ascot.

Laura Mongan, trainer of Harbour Law
He's done really good over the winter and looks brilliant. He went back to his owners and came back to us in January and looks and feels great, so it's exciting. He's in the Yorkshire Cup, but is ready to go now and we feel it's not a bad starting point for him, except he carries a 7lb penalty. He's a really laid-back horse – he always has been – but he's definitely strengthened over the winter, and we feel he's grown mentally and physically and his work's been good. Ascot suits 100 per cent and two miles will be spot on. The Gold Cup is his main target and it always has been since he won the St Leger. We've no doubt he stays; the further he goes the better he seems to be, which is why the Sagaro's a better option than the Yorkshire Cup.

Roger Varian, trainer of Battersea
He was gelded at the end of last season and the plan has always been to campaign him as a potential Cup horse. He has an excellent record at the course and will love the ground, so this is the ideal starting point to discover if he stays.

Hughie Morrison, trainer of Nearly Caught, Vent De Force and Sweet Selection
I was hoping the rain that hit Kempton on Monday would hit Ascot, but it doesn't seem to have and I'm a bit nervous about the ground for Nearly Caught and Vent De Force. The reason I'm running all three is there is only one opportunity to run a black-type stayer at this time of year. Nearly Caught is in really good form and I'm very happy with him. You'd have to think on the ratings he'd be the first string, but he won first time out only as a three-year-old and is seven now, so you have to be realistic in that respect. Vent De Force lost his way after the Gold Cup two years ago and then we gelded him and he just got depressed. We'd be disappointed if he doesn't show a bit of form now, maybe not in the Sagaro, but he seems to have come back to himself. Sweet Selection stays well, but this time last year she was beaten off 70 first time out, so that has to be reflected in her chance as well. She's an absolute pleasure, but is lazy in her races and in her work. She needs to be because they don't stay if they don't relax and she certainly knows how to relax.

Luke Morris, rider of Pallasator
I used to ride him before Qatar Racing bought him and his work at home has been very pleasing. He won well fresh last year and has run some nice races around Ascot, so I'm hopeful of a bold show. He's probably always going to have a slight kink to him, but it's part of his make-up and it's just about harnessing it and channelling his energy in the right direction. He's always going to be sweaty and go down early etc.

Charlie Fellowes, trainer of Prince Of Arran
He's rated only 91 on turf so it would appear he has a bit to find, but if you look at his all-weather rating, which is 12lb higher, then he deserves to be there. I actually think he'll be better suited to turf now he's grown up and stopped being so quirky and Ascot looks the perfect place to go, as it's similar to Kempton where he's run extremely well. He's in great form.

FIRST PUBLISHED 6:00PM, MAY 2 2017
He won well fresh last year and has run some nice races around Ascot, so I'm hopeful of a bold show