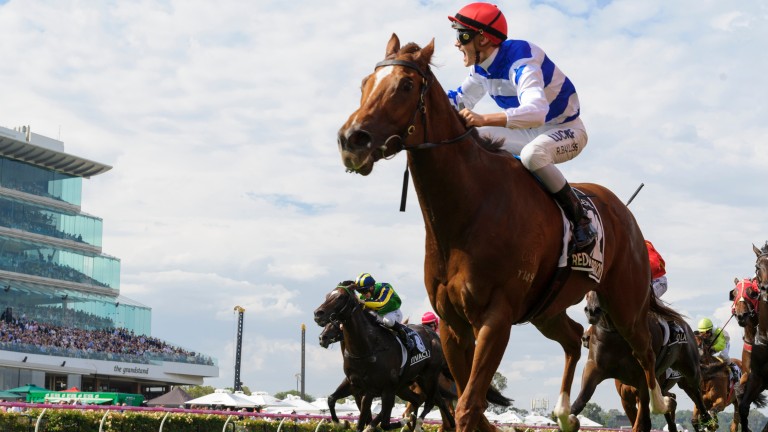 Redkirk Warrior and Regan Bayliss land the Newmarket Handicap at Flemington
Vince Caligiuri/Getty Images
1 of 1
By Sam Walker 10:34AM, MAR 17 2017

Redkirk Warrior achieved the unthinkable on Saturday. Having started his career over middle distances in Britain, he found himself taking on the top Australian sprinters on their home turf in one of the most prestigious races on the planet – and he won.

The Newmarket Handicap has an unrivalled record of producing sprint champions. Takeover Target, Miss Andretti, Scenic Blast and Black Caviar all won the Newmarket before following up at Royal Ascot, helping Australia earn its reputation as the home of great sprinters.

But Redkirk Warrior went against the flow last weekend, completing his unlikely journey from Yorkshire – via Newmarket and Hong Kong – to take on the best and beat them at their own game.

The six-year-old’s long and winding path from up north to down under marks him as a highly unusual winner of Australia’s premier sprint, but there was certainly no fluke about his two-length success over some of the fastest horses in the world.

Indeed, multiple champion trainer David Hayes has already earmarked the British-bred speedball as the best horse in his yard and pointed to some lofty targets.

He posted a career-best RPR of 118 on Saturday, which ranks him among the leading sprinters in Australia, and there could yet be more to come as this was just his second start over a trip shorter than seven furlongs.

The Australian media made a big deal of the fact he was the first winner of the Newmarket in 100 years to arrive without a prep run, but perhaps the biggest shock was where he came from as a year ago the new kid on the Aussie sprint scene wasn’t in Australia – and he wasn’t even a sprinter.

The long journey to his history-making win at Flemington started at Manor House Stud on the Yorkshire Dales. From there he joined William Haggas in Newmarket, running under the name Redkirk.

He didn’t run at two but got off to a winning start in a 1m2f Yarmouth maiden at three. He stuck to a mile and a quarter on his next start, which he won, and was then shipped off to Hong Kong. His name was changed to Redkirk Warrior and, after running with distinction as a four-year-old, he was made favourite for the Hong Kong Derby over a mile and a quarter in 2015.

However, he was only 11th that day and by May last year he had still run just seven times in Hong Kong due to ongoing foot problems.

Then Hayes got the call, taking up training duties ten months ago.

The question for the Australian Hall of Fame trainer was simple: could he take a horse who had won in Britain and Hong Kong, sort out his foot problems and rejuvenate him as a six-year-old?

On Saturday we got the short answer. After an operation and some careful farrier work, Redkirk Warrior was better than ever.

The Newmarket Handicap was just his tenth career start and the Yorkshire lad posted the performance of his life to beat Voodoo Lad (115), with Star Turn (115) and Sheidel (114) providing recent solid Group 1 form in third and fourth.

The next steps could be the most interesting for Redkirk Warrior as he has just turned six and is entering what could be the year he’s at his most potent. But the big question in light of Saturday’s win is over which distance is he most effective.

It’s not uncommon for a horse who started out over longer trips to improve when dropped back to sprints and his career profile fits that mould.

He has three siblings who won over five furlongs and his unraced dam is related to two more winners over that distance. In all, a high proportion of the winners under his first two dams prefer the minimum trip, which suggests there is a chance he can improve again for another drop in distance.

However, Hayes has indicated the Doncaster Handicap, over a mile at Randwick next month, is next on his agenda – and, given his form in Europe and Asia, there is a chance will be just as effective back up in trip.

The real overriding question that should be answered this year concerns what was holding him back before. Were the foot problems preventing him from achieving this superior level of form, was he running over the wrong distance or is he simply a late bloomer?

Having shown this level of form over six furlongs, the chestnut gelding might just end up in the richest turf race in the world, the Everest, run at Randwick over that trip in October.

The slot licences for the Everest, which are in effect the tickets to get into the race, were made available last week, so if the owners are interested in taking Redkirk Warrior right around the world and up Everest they had better get in quick.

FIRST PUBLISHED 10:34AM, MAR 17 2017
The big question in light of Saturday’s win is over which distance is he most effective