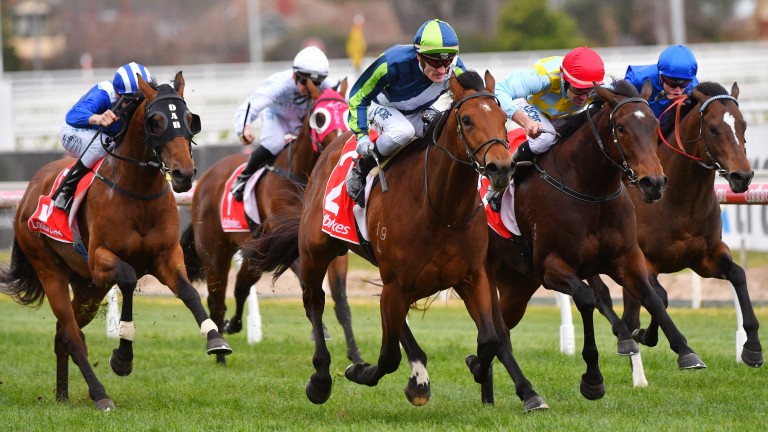 Top Australian three-year-old sprinter Merchant Navy is set to join Aidan O'Brien in Ireland for a tilt at Royal Ascot in June.

The son of Fastnet Rock, who won the Group 1 Coolmore Stud Stakes over six furlongs at Flemington in November, was sold to the Coolmore team in December in a multi-million-dollar deal, after which he was leased back to his original owners to continue his racing career.

"I am very excited by Merchant Navy," said O’Brien, who has won Group 1 events at Royal Ascot with previous Aussie imports such as Starspangledbanner, Haradasun and So You Think.

"I was very interested to see his run on Saturday and I thought he was unlucky not to win. I love that he can produce a long, sustained burst of speed and the Diamond Jubilee looks the perfect race for him.”

Aussie trainer Ciaron Maher, who sourced Merchant Navy at the 2016 Inglis Easter Yearling Sale, said: "Merchant Navy was an outstanding yearling and I have rated him as something special ever since the day he first cantered.

"He is a brilliant colt with an incredible constitution and I look forward to him showcasing his talent at Royal Ascot," added Maher, who is currently serving a six-month suspension. "I have no doubt that he is a horse capable of excelling on the world stage."

Although Australian sprinters became a dominant force at Royal Ascot after the pathfinder Choisir, they have not won a race since Black Caviar's memorable victory in 2012.

Merchant Navy's compatriot Shoals, a dual Group 1-winning filly also by Fastnet Rock, is another set to make the trip. She will run next in the Group 2 Arrowfield 3YO Sprint at Randwick on April 14 before a Group 1 date in Adelaide – and then on to Royal Ascot, according to owner John Messara, the Arrowfield Stud supremo.

Royal Ascot has also been confirmed as a target for Redkirk Warrior who completed back-to-back successes in the Newmarket Handicap on Saturday. The seven-year-old, who started life known simply as Redkirk and was successful over ten furlongs on debut in Britain for former trainer William Haggas, won the Lightning Stakes in February, beating Everest hero Redzel with a thrilling last-to-first effort.

Redkirk Warrior is set to run in the Chairman's Prize over six furlongs at Sha Tin en route to Britain.

The biggest Australian name, of course, is the mighty mare Winx, whose connections are set to make a decision on any possible visit to Britain after she has run in the George Ryder Stakes at Rosehill in Sydney on Saturday week.

FIRST PUBLISHED 10:02AM, MAR 13 2018
I love that he can produce a long, sustained burst of speed and the Diamond Jubilee looks the perfect race for him