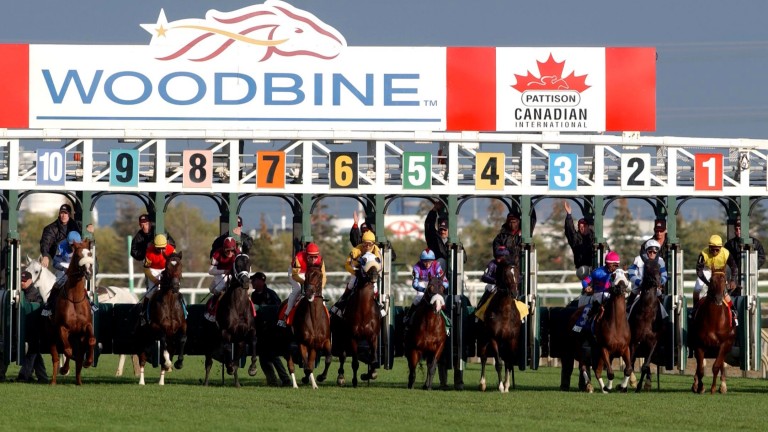 Woodbine: hosted the first leg of the Canadian Triple Crown on Saturday
Bill Selwyn
1 of 1
By bloodhorse.com UPDATED 10:18AM, JUN 30 2019

California raider One Bad Boy caught a flier from the gate and never looked back, taking the CA$1,007,200 ($769,302) Queen's Plate Stakes at Woodbine with a game frontrunning effort, with Qatar Racing's Federal Law, ridden by Jamie Spencer, back in seventh.

With Flavien Prat aboard, One Bad Boy turned back a challenge from Avie's Flatter in the stretch to score by three and a half lengths.

The ten-furlong opening leg of the Canadian Triple Crown for Canadian-bred three-year-olds was the first start north of the border for California-based trainer Richard Baltas, who conditions One Bad Boy for Sayjay Racing, Greg Hall, and Brooke Hubbard.

"It was awesome, very awesome," said Hall. "We were a little worried about his ability to run the mile and a quarter, but you saw that he started pulling away, so we're very excited about that."

Prat, winner of this year's Kentucky Derby when Country House was elevated to first place, became the first jockey to win both the Kentucky Derby and Queen's Plate since Kent Desormeaux in 1998 with Real Quiet and Archers Bay, respectively. Bill Hartack also achieved the Derby-Plate double with Northern Dancer in 1964.

Avie's Flatter, Canada's champion two-year-old male of 2018, worked out a good trip after beginning from the outside post 14 and raced second behind One Bad Boy throughout.

"Second-best today," said Javier Castellano, jockey of Avie's Flatter. "Not much to say. Kept tracking the winner right there all the way on the lead. He never stopped and he never came back to me. I was in perfect position in the race, the race was slow, and I was right next to [One Bad Boy], but I couldn't get by."

Federal Law, formerly trained by Archie Watson and now in the care of Mark Casse, weakened in the closing stages under Spencer.

The $400,00 Prince of Wales Stakes, over an extended nine furlongs at Fort Erie's dirt oval on July 23, is the next race in the Canadian Triple Crown, which winds up with the $400,000 Breeders' Stakes over a mile and a half on the EP Taylor turf course August 17.

Wando, in 2003, was the last horse to sweep the series and the seventh since its inception in 1959.

Wet Your Whistle invaded from south of the border and closed with a strong late rally to win the CA$304,800 (US$232,806) Grade 1 Highlander Stakes at Woodbine.

The four-year-old earned his first graded stakes score in the turf sprint to build a four-race win streak for trainer Michael Trombetta.

Trombetta said he saw Wet Your Whistle move to another level after the first of his sequence in December, and said: "We always thought he could do some good things, but that was the turning point for him. It's been a lot of fun."