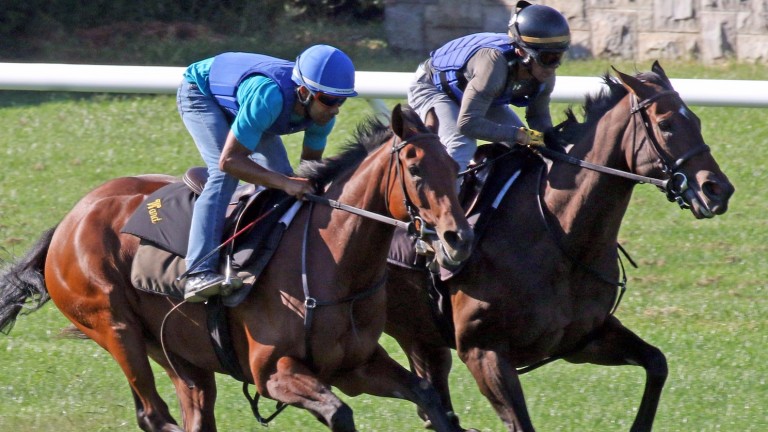 With the Breeders' Cup fewer than six weeks away, American racing's biggest names – headed by Lady Aurelia and Arrogate – have been putting in serious workouts ready for the two-day championships at Del Mar on November 3-4.

Wesley Ward described Lady Aurelia as the fastest filly he's ever trained as she returned to work on Tuesday for the first time since her narrow defeat in the Nunthorpe Stakes. Under a tight hold from exercise rider Julio Garcia, the daughter of Scat Daddy – whose target is the Breeders' Cup Turf Sprint – covered four furlongs in 50.30s alongside stablemate Childhood on the Keeneland turf circuit.

"Julio's feet were in the dashboard," Ward said. "We put her with the filly that we've got nominated to the Buffalo Trace [on October 13], and it was a really good work. I was really happy. Julio did a great job of just getting her to settle and relax.

"She’s everything you want right now," the trainer added. "She’s very, very fast – the fastest I’ve ever had – so I like to have the spacing between races.

"Especially being her first work back today, we'll be able to get her there with what I believe is the greatest grass course in the world here at Keeneland, in good order – that’s the main thing. Lead her over to the paddock at Del Mar on raceday as sound as she is today, it will take one heck of a horse to beat her."

Arrogate back on song

At Santa Anita, the world's highest-rated horse Arrogate reportedly looked more like his old self following a pair of defeats at Breeders' Cup venue Del Mar. Going five furlongs under Rafael Bejarano, the Dubai World Cup winner posted a 'bullet' workout (fastest at the distance) in a time of 59.40s.

Speaking to the Blood-Horse, Baffert said he was pleased with the workout. "He was real focused and he went around there really nice, easy," he said. "He just did it like the Arrogate we know. I was happy with it.

"I can tell there is more power there," added the trainer. "He is getting his weight back. He looks happy."

Although Saturday is marked by several major Breeders' Cup trials among eight Grade 1 events split between both coasts on what used to be called Super Saturday, Arrogate is set to train up to the Classic.

"He is pointed to it as long as I 100 per cent feel great about it," said Baffert. "He looks good for it. Collected is doing really well also and West Coast came out of his race really good. It's still a long way to go though, so we don't get too ahead of ourselves."

Arrogate is a best-priced 7-2 to retain his crown in the Breeders' Cup Classic behind ante-post favourite Gun Runner, who flew to southern California on Monday to continue his build-up to the $6 million contest.

Lukas star out of Breeders' Cup after surgery

Sporting Chance, who became D Wayne Lukas's first Grade 1 winner for nearly three years when claiming the Hopeful Stakes at Saratoga earlier this month, is out of the Breeders' Cup Juvenile and will miss the remainder of the season after surgery to remove a knee chip.