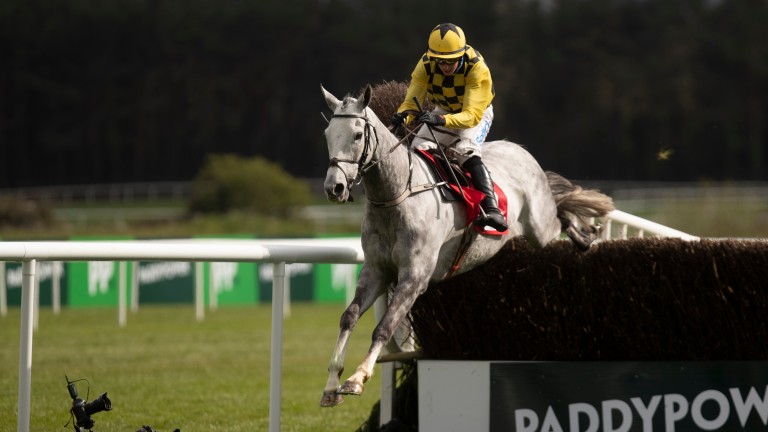 Asterion Forlonge: back to his best in the novice handicap chase
Patrick McCann
1 of 1
By Justin O'Hanlon UPDATED 7:41PM, APR 30 2021

Willie Mullins made it 14 winners for the week, astonishingly for 14 different owners, when topweight Asterion Forlonge readily landed the Grade A EMS Copiers Novice Handicap Chase by 14 lengths.

Trying to get the winner to jump fences with any enthusiasm is something that has tested the immense skills of the champion trainer, but dropping back to handicap company seemed to do the trick.

Bryan Cooper kept Asterion Forlonge to the inner the whole way and the classy grey jumped gun-barrel straight to post an effortless success.

"Dropping in class and the difference in the pace of the race meant he was able to put it all together," said Mullins. "I think he could improve an awful lot next year and maybe tackle top Graded races. He has the potential to be a really good horse."

Jessica Harrington saddled her third winner of the week when the Potts family's Rapid Response got up on the line to land the Grade B mares' handicap chase, named in honour of the late Francis Flood and his 1972 Gold Cup winner Glencaraig Lady.

Sean O'Keeffe got the maximum from his partner, who collared favourite Scarlet And Dove, and he said: "I thought a good jump at the last would give me a chance and she picked up well. Mrs Harrington has been very good to me and it's great to ride a winner for her here."

Small but select is not really a description one would associate with the line-up for the Bishopscourt Cup, the hunter chase confined to horses owned by farmers in the Kildare Hunt district, but Rewritetherules is one of the best horses to have contested this race in recent years.

The son of Jeremy had not really been at his best this season, but this drop in class could not have suited him better and in the end he pretty much sauntered to victory under Tom Hamilton as he easily accounted for main market rival and 2018 winner Alpha Male by eight lengths.

"When the O'Rourkes bought him, the plan was to win this cup. They have wanted to win it for years and I'm delighted to get the job done for them," said trainer Shark Hanlon.

"He'll go over fences and hurdles now. I've no real plan for him but if he's not good enough in decent races we'll come back here next year."

Bob wins on the nod

There was a thrilling finish in the Champion Hunters Chase as Bob And Co, owned and ridden by David Maxwell, put his nose down on the line to give Paul Nicholls his second winner of the week.

The son of Dom Alco fought out a terrific finish from the back of the final fence with the Patrick Mullins-ridden favourite Billaway and, while the latter's nostril was in front just before the line and just after it, Bob And Co had his in front where it mattered.

Maxwell is one of a diminishing band of amateur riders in the truest sense of the word, who ride in these races for fun. “I've said it before, this is the most fun you can have with your trousers on,” he told RTE TV before the race.

Afterwards he said: “That was amazing. The horse deserved to win because he wanted it badly and he was never going to lie down. It's amazing to be able to come and do this here, and it's an unbelievable sport when a 43-year-old businessman is allowed to!”

FIRST PUBLISHED 6:15PM, APR 30 2021
He could improve an awful lot next year and maybe tackle top Graded races. He has the potential to be a really good horse

Harrington juveniles to the fore again as promising newcomers keep emerging Red-hot Mike O'Connor proves the master once again for in-form Henry de Bromhead Rachael Blackmore bids for more big-race glory - but this time she's on the Flat Last race off: can Willie Mullins and Ryan Moore strike with fancied Saldier? 'We couldn't be happier with him' - Foley eyeing first Royal Ascot win with Vega Improving Real Appeal makes the step up in class to land Ballycorus